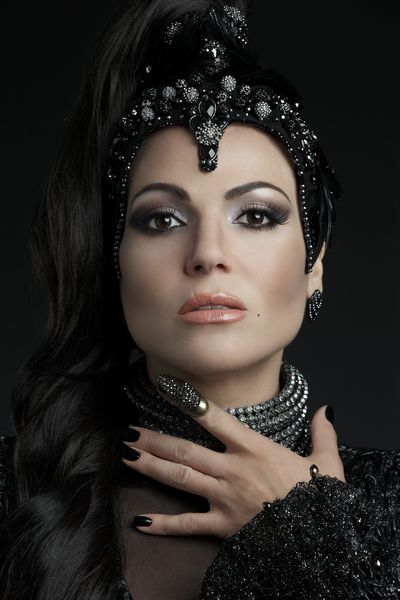 What a way to end the winter finale of Once Upon a Time. Not only was I pleased with this episode, but I was completely surprised by the hooded figure reveal. I do wish the episode had been at least 90 minutes because what should have been a rich moment between Belle, Rumple, and the Blue Fairy, turned out to be a rushed mess. What did work in this episode was the return to the Enchanted Forest. I miss that place so much.

Circling around the mega news that the sword Emma found can kill the Evil Queen without hurting Regina, was the lovely trip back to the Enchanted Forest where all my dreams about what Emma would be like in her fairy tale lifestyle would be…minus the groveling and the crying and the not so super kick-butt princess attitude. Minor detail. The Princess, Emma of the Enchanted Forest, was singing while picking daisies.

That is the most dramatic and most anti-Emma Swan we have seen, and I loved every minute of it.

The alternate fake reality of life in the Enchanted Forest with old Charmings and a crazy Rumple was so reminiscent of what drew me to Once Upon a Time in the first place. The costumes, the regal ceremonies, and the magical creatures all placed in a majestic castle is what the show needed to bring this show to a mid-season break.

The Evil Queen was on to something when she made her wish and sent Emma the Enchanted Forest. Unfortunately, her smart antics were countered by Regina’s quick thinking. They are essentially the same person, so Regina also had reign over the magic lamp and the genie inside.

By the way, Aladdin’s genie outfit was fantastic. I got a sense of nostalgia that had been missing from the Aladdin and Jasmine storyline. When Regina went to find Emma and ended up smack dab in the Enchanted Forest with seven dwarfs marching around, it was great. Her slap back to her formal stopping grounds was jarring for her as well as the people of the land. It is amazing to think how different all the characters are now compared to how they were before the Evil Queen’s curse. This is what makes Once Upon a Time great. The contrasting elements make for an engaging story.

When Regina does find Emma, it’s comical and, at times, just sad. I was completely wowed by Princess Emma and how she literally had no spark of “hero” in her. Even with Regina pretending to be the Evil Queen, a tiny bit of me was excited to see her actually crush Snow and Charming’s hearts.

What was not exciting to watch was Henry attempting to save the day by killing the “Evil Queen.” After all this talk about how the world was not real, Regina couldn’t remove Henry from the situation. This was a giant red flag. After releasing Rumple from his prison and crushing hearts you would think this fact would be engraved in her head. Unfortunately, Regina’s love for Robin got the best of her. Not only did she go to him in a trance-like state, but she and Emma are now stuck in fake Enchanted Forest world because the portal closed.

Now, I will say the silver lining is, Emma did not make it home to have her hooded figure stab her in the stomach. That is literally the only good news about Regina and Emma missing their magic bean trip. As worried as the family was back in Storybrooke about Emma, with Regina gone they have no magic wielding people to help them out with whatever crap storm is about to hit.

The crap storm I am referring to is the disappearance and reappearance of Belle and Gold’s son. The baby that was a baby when he left Storybrooke with the Blue Fairy is now a full-fledged adult who was kidnapped by the Black Fairy. Remember, the Black Fairy is Rumple’s mom. This can’t bode well for family drama and hidden agendas. It makes you wonder if the Black Fairy knew this was Rumple’s son and if so, what’s her plan to speed up his growth to adulthood, and why she wanted to kill Emma. This is where the cliffhanger finale left us.

Once Upon a Time usually does well with their finales and this week did not disappoint. I was happy to see all our characters involved in this week’s story line. The action was great and the reveal was pretty awesome. As mentioned before, I do feel the scenes where Belle and Rumple realize their child is missing along with the cameo appearance of a knocked out Blue Fairy were too short and rushed. But other than that, well done Once Upon a Time! Can’t wait to see what’s in store for us Oncers with the second half of the season.