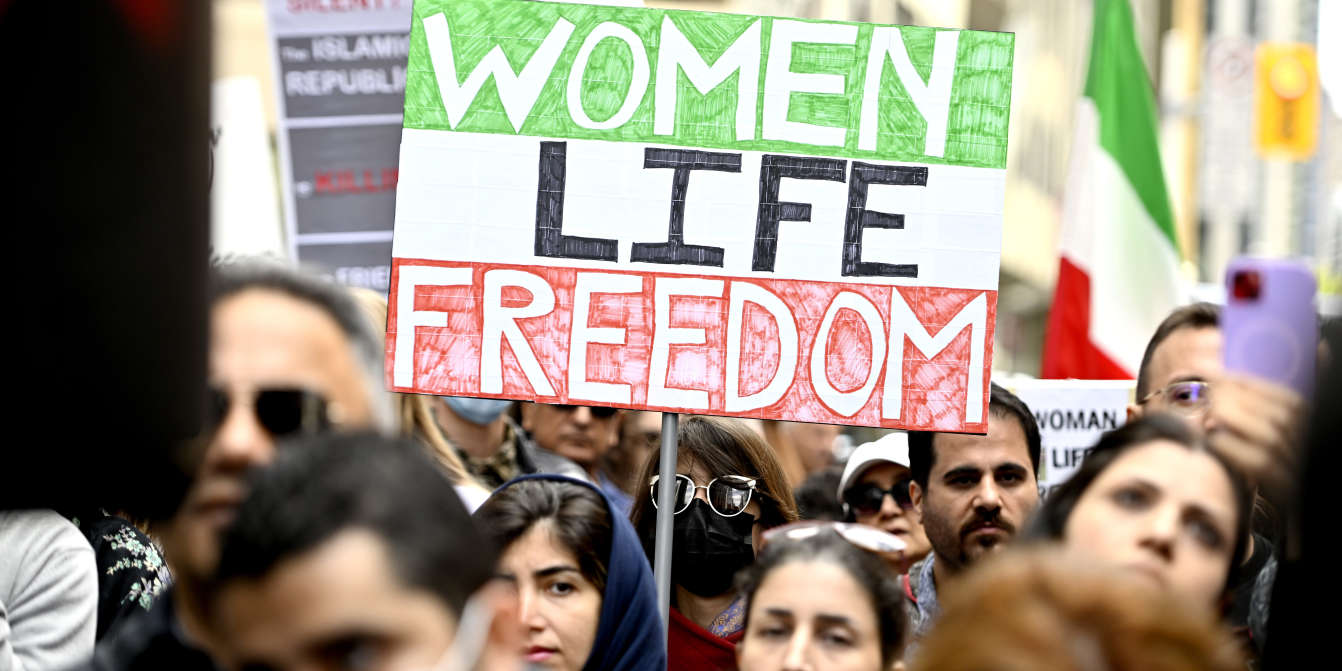 Iranian women are chanting “Women, life, freedom” as they take to the streets to protest the mandatory hijab laws that restrict their bodily autonomy.

Over the past couple of weeks, the women of Iran have risen up in the name of 22-year-old Mahsa Amini who was arrested, beaten, and murdered by Iran’s morality police. Allegedly, she was showing a few strands of hair from underneath her hijab while visiting family in Tehran.

Amini’s death has sparked protests across the country, while Iranians fight for their human rights, freedom of choice, and democracy. On the news, we’ve seen women cutting their hair in protest and bravely marching in the streets. In response, the Islamic Republic is arresting and killing Iranians. They have also shut down the Internet, in order to silence the country.

You may think these extremes could never happen in the United States, but honestly, we know better. When you hear the Iranian women chant, “Woman, life, freedom,” it resonates on a worldwide level, especially here in the United States as women also fight for autonomy. We are still facing the repercussions of the Supreme Court’s decision to overturn Roe v. Wade earlier this year. All over the world, women are demanding autonomy and rejecting the idea that anyone has the right to control our bodies.

The truth is, it’s not just about abortion rights or bodies. It’s sexual harassment and violence in school and the workplace, discriminatory dress codes, and ending period poverty.

The last time Iran saw a large protest like this was after the 1979 Revolution. Several hundred thousand women came out on March 8, International Women’s Day, to oppose the imposition of the mandatory hijab and the takeover of the revolution by Islamic fundamentalists. The fundamentalists used brute force to silence the protests. Women were told that demanding their rights would distract the revolution from its opposition to U.S. imperialism.

The morality police are tasked with enforcing that women cover their hair, bodies, and discourage the use of makeup. Let’s be clear — whether a woman chooses to wear a hijab is a personal choice that outside influence doesn’t need to dictate. Many hijab-wearing women have faced harsh discrimination at the hands of non-Islamic society. This shows that the situation arose out of prejudice and a disregard for personal autonomy.

I can’t help but think about how Black feminist organizations have brought together similar struggles like reproductive justice, class, racial, gender exploitation, gender violence, state violence, and mass incarceration. In the United States, Black women have organized in ways that recognize these intersectionalities.

Black feminist intersectionality, a term coined by feminist legal scholar Kimberlé Crenshaw, defines self-determination as “a struggle challenging the intertwining of capitalist commodification of women’s bodies, racism, and patriarchy.” Poet/writer/activist Audre Lorde, writer-activists Barbara Smith, Beverly Smith, and Demita Frazier (authors of the Combahee River Collective Statement), as well as founder of the #MeToo movement Tarana Burke have all demanded social transformation both at the structural and the personal level. Black feminist abolitionist thinkers such as Mariame Kaba and Romarilyn Ralston call for addressing the intersection of gender violence and state violence, urging our society to reject prison solutions and instead work to build a society in which injustices and root causes of violence are addressed.

Iranian feminists have also engaged significantly in anti-prison activism. For example, feminist activist and writer Narges Mohammadi has been imprisoned for years for her campaign against the death penalty and has published work while in prison. She opposes Iran’s prison system, which has nearly 200,000 prisoners, and she especially opposes solitary confinement as a global form of torture.

We are not so different, after all. Iranian women, Black women, and all women for that matter are fighting on some level for equity and change. If the women in Iran and women in the United States come together to dialogue on what we have in common and what we can learn from each other, women in both countries will be empowered against the growing oppression that is suffocating us all.

Women’s rights and equity are not about normalizing the ways in which society treats people. Instead, it is about honoring a person’s humanity and seeing that they are deserving of respect and dignity when making personal decisions that don’t harm other people.

Whether Mahsa Amini chose to wear a hijab had nothing to do with her personal worth and should never have contributed to the way she was treated by anyone, especially the morality police. Amini should still be alive. Women have long faced oppression and discrimination all around the world, in almost every single society. There have been many women like Amini throughout history, and there will be more victims if oppressive governments continue to control people’s bodies, stripping them of their right to choose. It’s time to make a change.