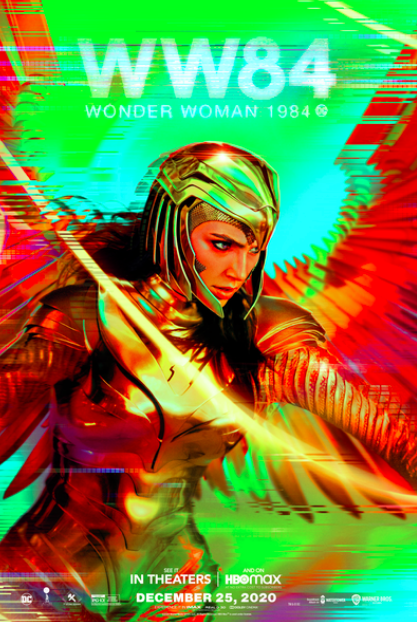 Warner Bros invited members of the press to review an early screening of Wonder Woman 1984 ahead of its opening premiere. What you can expect to see in Diana’s sophomore film is an action-packed love story and she takes on a new adventure with her lover Steve Trevor, the only man who could soften Diana.

Wonder Woman 1984 brings in a whole host of new characters this go round which includes The Mandalorian’s Pedro Pascal as the notorious villain Maxwell Lord.  Then there’s SNL alumni Kristen Wiig who metamorphosizes into Cheetah.  The film also welcomes Insecure actor Natasha Rothwell. Expect to find all of the components you would desire to see in a comic book flick which includes tons of action, villainy, and a captivating love story.

During breakout sessions, Gal Gadot and Patty Jenkins spoke directly to the press via Zoom about the making of the film.

Patty says that when you watch Wonder Woman 1984, “this should be like you’re going to a massive tech bowl in the 80s”.  The film’s 80’s vibe definitely permeates throughout the film and it’s more than just the clothes and the big hair.  The lighting and shooting style gives it that flair as well.

Patty did admit she did take notes from the Warren Beatty film Heaven Can Wait when it came to crafting together Steve Trevor’s story and appearance in the film.

As for Diana’s role in this sequel, Gal states “Diana is learning the complexities of humankind”. She inevitably suffers from the same problems as normal human beings suffer from. According to Gal, it gave her a lot to play with and it was a different experience from playing that “fish out of water” type of role. For Gal it was more interesting for her to show Diana’s flaws and imperfections in this depiction of Wonder Woman that the larger-than-life superheroine we’ve always known her to be.

As for Cheetah, played by Wiig, Patty said “it was really cool to make her [story] arc organic”. And for Patty, she says, “executing Cheetah was harrowing.”

Gal added that she clicked with Kristen immediately and they had great chemistry while working on set.  They did music video clips and had a lot of fun together on set. “One moment we’re laughing, and the next moment the camera rolls and we can get serious.”

The filming took 8 months to shoot with a 6-day a week shooting schedule.  Gal described that it felt like she was living in a commune during that time and jokingly would refer to herself as Wonder Woman.

“I feel like I could make 700 of these movies,” says Jenkins.  The filmmaker further mentions that this film is about teaching love and making peace with mankind which is certainly the heart of what this sequel represents.

Gal wraps it up by saying she was more empowered, more ambitious and ready to take this role to the next level compared to how she was when filming Wonder Woman.  That definitely permeates through her performance in Wonder Woman 1984.