Horror came to WonderCon last night in the form of a familiar doll. Attendees got to see a first look at the new film Child’s Play.

Directed by Lars Klevberg, the film follows a mother who gives her son a toy doll for his birthday, unaware of its more menacing nature. The film stars Aubrey Plaza as Karen Barclay and Gabriel Bateman as Andy Barclay. Along with the director and stars, the panel included writer Tyler Burton Smith, producer David Katzengurh, and producer Seth Grahame-Smith.

We started the panel with a look at the new trailer. It looks good. As a fan of the original 1988 version of Child’s Play, the excitement over a “reimagined” version took over. The red hair, the piercing blue eyes, I’m talking about Chucky of course. It was announced that voicing Chucky would be none other than, Mark Hamill! Hamil is, of course, a seasoned voice actor, having done the Joker in Batman: The Animated Series among others.

This was big news coming out of the horror realm at WonderCon.

When asked how Hamill as Chucky came to be, the producers said, “We asked him, thinking there was no way he would say yes. And, he did and it just happened.” Seth continued by saying, “Reimagining a character like this with Mark Hamill is really something to watch. He creates a voice and creates a character that embodies it.” The writer of the script, Tyler Burton Smith, was even more surprised by the selection when he first found out. “I had never thought Mark Hamill would ever be in this movie when I was writing it. While writing I never even thought about who would voice Chucky. When they told me, I thought it was perfect.”

Reboots of films are all the rage right now. We have films coming from major studios that are being redone. So what does a reboot of Chucky mean? “The first question we asked,” started Seth, “why does this movie need to exist in 2019? We sat around and we came up with the whole genesis and this is a new take of this classic character and story.”

The cast and crew are confident that this new version will have elements of the original. The team stated they wanted to pay tribute without doing it shot by shot. It’s different because of the origin story of how Chucky comes to life. The writers and producers wanted you to think about today and question, “What if Alexa tried to kill you? Kids are left alone with their toys all the time. What if all the things that are supposed to go right, go wrong?”

The way Chucky looks came right out of the script. “It all made sense. It was all tied into the story,” filmmaker Lars said. Lucky for us, it really is a nod to the original. There was never talk about having a fully CGI Chucky.

“We wanted as much animatronic Chucky as possible,” says Seth. It was easier to work with a doll than to work with a green screen tennis ball or X tape for the cast as well. “The only time I would have preferred a CGI doll, is when Chucky is rubbing my leg,” says Gabriel. That is completely understandable. That comes off creepy on so many levels.

As we wrapped the panel, the table gave a shout out to their other star, Brian Tyree Henry who plays Detective Mike Norris in the film. His character is a play on the original one from 1988. “He has an emotional connection with Andy and Karen. He’s dealing with a lot the mystery of Chucky, bing linked to the core relationships,” adds Tyler. Chucky has always been about the relationship between a boy and his doll. “It’s the cat and mouse games of psychological terror that really connect with the original 1988 film.” 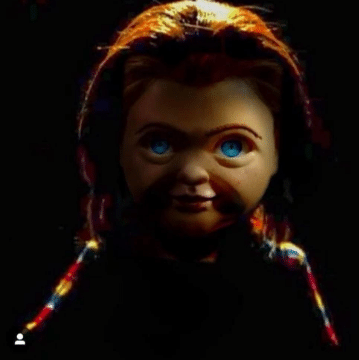 It’s cool because Andy is thirteen in the film, so basically a teenager. So, he’s going through a lot of things on his own. That’s different and more relevant today.

If you need any other reason to see Child’s Play in theaters, just remember, Chucky is back and Aubrey Plaza is in it. She’s a great actress that does well with creepy. But most of all, Mark Hamill is Chucky. (mic drop)