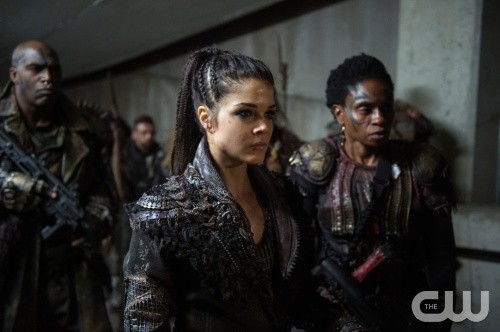 You ever turn on your TV and wonder why the show you’re watching has no white people? Yeah, me neither.

When Ricky Whittle made his fateful exit by execution on The CW’s the 100, fans were understandably outraged. It was a dark time for viewers of all colors who had loved the kind, honest and honorable grounder Lincoln; the original link between the blundering Skai people and the grounder world they had come to inhabit. Even before Lexa, there was Lincoln. Now Whittle serves as frontman for Showtime’s American Gods and a whole season later he is still sorely missed.

Perhaps his death would go down easier if Whittle’s exit from the show represented an isolated event. Lexa, however — one of the only openly queer characters with a recurring storyline on the show — was also killed off without warning. Her death continues the rampant TV trend of discarding LGBTQ characters in quick and decisive succession, and maybe I’m just naive, but I can’t help but wonder…why?

The CW Network has long served as home-base for many a blerd for housing a large bulk of DC Comics’ small-screen presence. The unique partnership between CBS and Warner Bros. Entertainment provides content especially geared toward a young adult viewer. While I understand why this focus may not be everyone’s cup of tea, one has to admit, the content is notably diverse — especially when compared to the other Big 5 networks. So diverse in fact that the network currently boasts one of the highest percentages of female-led line-ups of any major network, with shows like Jane the Virgin, iZombie, Reign and, you guessed it, the 100 leading the pack. However, of those four shows, only one is led by a woman of color. Given the turning tide of TV representation, why is it that diversity must so often be wrapped in (preferably heterosexual) white ribboning to be considered sustainable?

In the first episode of the 100, a populated spaceship falls from the sky to earth and nearly everyone lives, and you know what? I bought it. But now, riding the high of the Black Panther trailer release and with the CW’s own Black Lightning waiting in the wings, it’s time to call BS on the strictly ridiculous idea that diversity doesn’t sell, or that it doesn’t sell for long.

The great Aubrey Graham once said, “I’m here for a good time not a long time, you know I-” and once again, @champagnepapi ain’t never lied. Just do me a favor and point me to the hypothetical universe where I get to live.