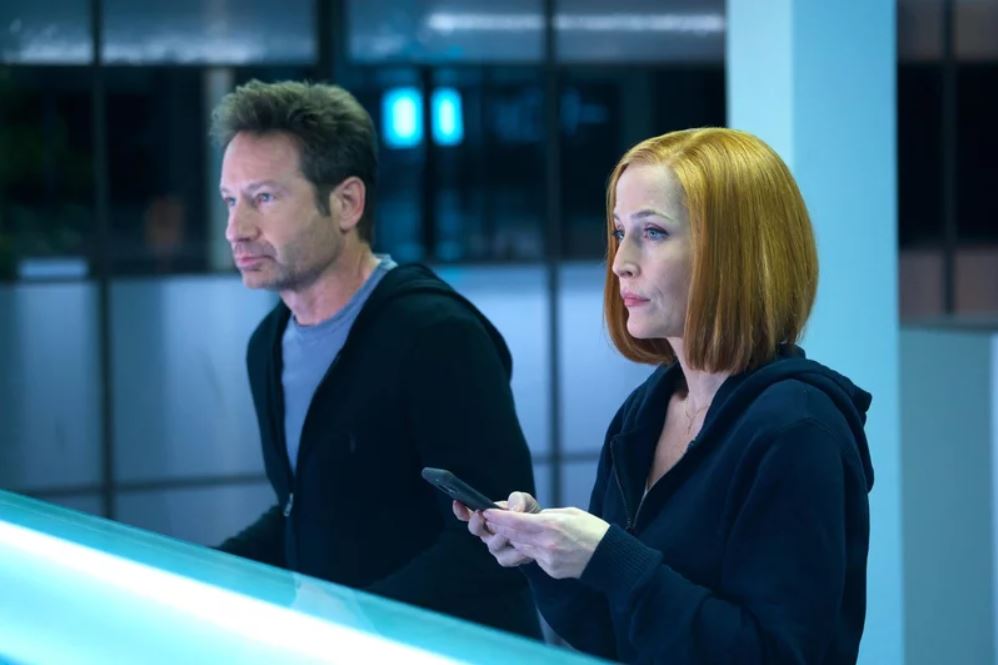 Remember Tay, Microsoft’s chatterbot that was meant to mimic a 19-year-old American girl? The cold open of this week’s episode of X-Files is a call back to it. It introduces us to a new chattterbot that followed a similar path of Tay, quickly becoming a hate spewing publicity nightmare as it learned offensive language from the real life users it was interacting with. The cold open ends with the following warning: “Humans must take care in teaching A.I. or one day, we will be the ones deleted.” The theme of this week’s episode is artificial intelligence gone rogue. Not in the robot apocalypse way. Instead it’s more insidious, fitting in with how we use technology in our daily lives – everything from malfunctioning GPS to annoying pop-ups.

The episode opens with Mulder and Scully in a fancy sushi restaurant. They’re completely alone, no other diners or staff. They enter their orders in a tablet. Other than the sounds the tablet and their phones, the scene is silent. The technology speaks while the humans say nothing. Scully’s meal is fine but Mulder’s turns out to be a blobfish. They laugh and Scully takes Mulder’s picture with it. It’s a quiet interaction that speaks to how comfortable they are with each other. Moments like these subtly remind us of how long they’ve been together. Mulder tries to take the meal back to kitchen but it’s manned by robots. He decides not to tip, beginning their troubles in this episode.

On the way home, Scully’s driver-less car trip is faster and more dangerous than she intended. Then, instead of going home, Mulder’s GPS leads him back to the restaurant. Meanwhile, a message telling him he still has time to tip keeps popping up on his phone. Scully’s home alarm system won’t accept her password. Drones stake out Mulder’s home while one delivers a mysterious package to Scully. The package turns out to be a rhoomba like robot that gets more violent when she refuses to rate it. Technology continues to turn against them in these small annoying ways while also letting them know they’re being watched at all times.

It’s things we go through all the time: websites not taking their passwords and automated systems refusing to understand them. It morphs from mundane annoyances to something more familiar to a “tech gone wrong” sci-fi movie. Mulder’s home is besieged by hundreds of small drones. Scully’s smart home begins to malfunction, at one point locking her in with a gas leak. The rhoomba sparks a flame, causing an explosion that Scully narrowly escapes thanks to Mulder. Their tech is obviously trying to kill them now and won’t let them call for help.

In the background, Crosby, Stills, Nash & Young’s “Teach Your Children” plays everywhere. It serves as a message from our technology which has grown sentient. We created it to serve us, and in a way it is our child. The example we provide isn’t always a good one. After multiple attempts on their lives from the A.I., a robot gives Mulder his phone back. The message asking for a tip pops up one more time, ticking down as the robot hovers menacingly over them. Mulder finally capitulates, tipping the restaurant. Everything goes back to normal. The A.I. sends one last message to Mulder: “We learn from you.” “We have to be better teachers,” Mulder replies. The episode ends with them sitting in a dinner filled with people. They put down their phones in favor of holding hands and being in the moment.

The episode title, “Rm9sbG93ZXJz,” translates to the word “Followers” in Base64 code. One of the things that I liked about this episode is how silent and isolating it is. Mulder and Scully speak more to technology than they do each other. It reflects how often we loose ourselves in our phones, tablets and computers, ignoring the people and environment around us. Before the A.I. starts actively trying to hurt them, a lot of the annoyances of this episode are based in reality. Knowing that, who knows, one day we might get to a point when not tipping our robot manned restaurant can lead them on a killing spree against us. The message of this episode is that we have to teach our robot children to be better than us and remember to sign off. That or always remember to tip.