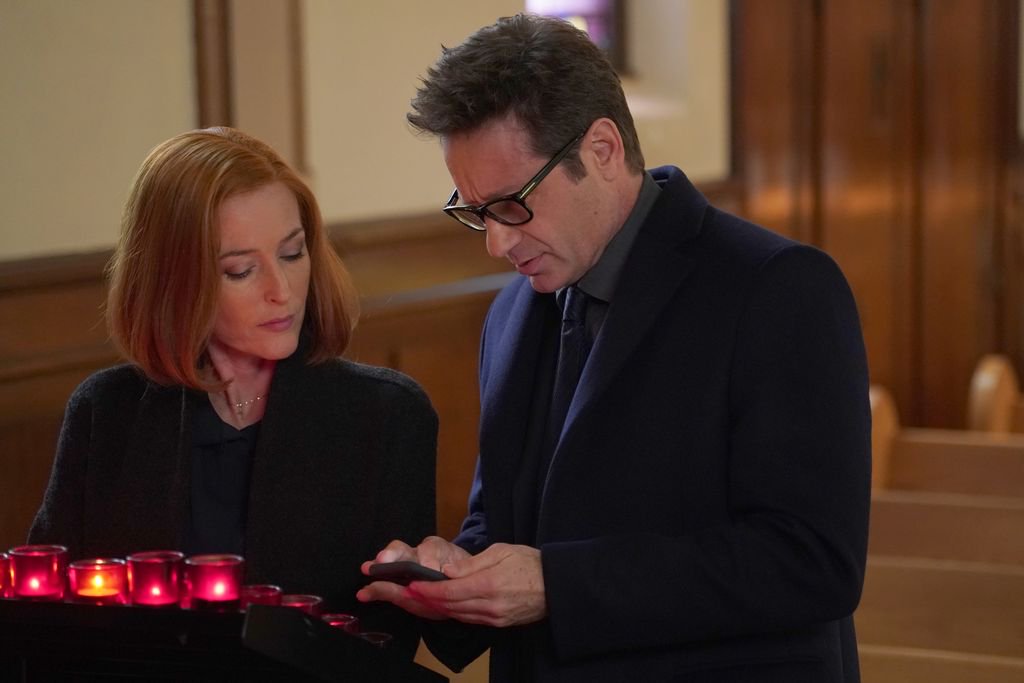 What wouldn’t you do to stay young and beautiful? The latest episode of X-Files, “Nothing Lasts Forever” asks us this question and more. This episode isn’t for the faint of stomach. In the cold open, we see a couple of surgeons illegally harvesting organs from a dead man. Outside, a man listens to the Tad O’Malley show in a van while a praying woman watches from the roof above him. Is this an X-Files episode or the beginning of a comic book vigilante movie?

In case you hadn’t grasped the full depravity of these surgeons, one takes out the pancreas that was deemed too bad for harvest and licks it. The praying woman makes her way into their illegal back alley surgery and kills the man transporting the organs along with one of the surgeons by impaling them with metal rods to the chest. The other surgeon gets away with an organ-filled cooler. The woman leaves the other cooler of organs outside of a hospital with the message ‘I will repay’ written on the outside.

Scully and mostly Mulder muscle their way onto the case. In a cute sequence, Scully teases Mulder about his new glasses, and he asks her if she got a new haircut. Really, Mulder? It’s been weeks.

We flash to a scene of Mulder and Scully in a church. Religious imagery is juxtaposed between the priest offering comfort to Juliet (a.k.a the rod pounding vigilante) and her sister, Olivia, offering blood to Barbara Beaumont. The organs weren’t meant for a donation, they were meant for Beaumont’s cult. Through ingesting an organ and blood smoothie, Beaumont and her followers have obtained a level of youth and beauty. Olivia is part of that cult, and Juliet is trying to get her back. The priest tries to offer Juliet comfort, but she only has revenge in her heart.

Scully tells Mulder about when she first believed in God. Scully’s faith is something the show has wavered between ignoring, briefly touching upon, and heavily featuring. This episode is more of the latter. Scully may not believe in miracles anymore, but she does believe in the power of faith. Her mother’s necklace is a symbol of that. I think back to episodes like “One Breathe” when miracles did happen, and Scully’s faith was proven true. However, maybe she’s seen too much to have the simple faith that allowed her younger self to believe God performed a miracle when she got a puppy for Christmas. She wants Mulder’s faith. She sees him as bearing ‘true north’ no matter what happens. Mulder knows that isn’t completely true. The series is dotted with moments where Mulder has had serious doubts and has lost his faith only to find it again.

“I think all I have – all any of us have are the results of all the choices that we’ve made. And at the end of the day, we just hope we made the right one,” Mulder tells her. Mulder and Scully have both made their choices over 11 seasons and those choices have led to the people they have become. They haven’t always been the right ones. However, as long as they believe most of them were right, they’re faith remains intact. More than Scully’s faith in God and Mulder’s faith in the truth, is their hard earned faith in each other.

Outside of the church, Mulder notices that three rods are missing from the church fence. The same rods were used in the surgery massacre. As Mulder notes, Juliet is literally using the church to exact vengeance. Juliet is also the result of her choices. While Scully’s faith waivers, Juliet is resolute. She will be the miracle that saves her sister. She believes her actions are justified in the eyes of God.

For Barbara Beaumont, anything is justified in her quest for youth and beauty – including murder. She’s surrounded herself with other like-minded individuals who see her as the reason they’re all beautiful now. Her choices define her as a vapid, self-serving, and possibly psychotic actress long out of her prime. Rather than wait for Dr. Luvenis, who is the brains behind this operation, to retrieve the organs left at the hospital, she lets one of her cult members offer his own. In a particularly macabre sequence, Barbara sings “There’s Got To Be a Morning After” while the cult member guts himself and the other cult members pull out his organs. Dr. Luvenis called the cult members their seeds. For Barbara, they’re only means to an end.

Scully has the hospital put a tracker in the one of the organs that Luvenis stole. Juliet tracks them to Babara’s location. They find out that Barbara Beaumont is actually an 85-year-old who obviously looks much younger. While Mulder and Scully try to figure out what is happening, the cult members attack them. Juliet bursts through the door and immediately stakes Barbara. Mulder later confronts Dr. Luvenis who is now surgically attached to Olivia. He claims to have found a cure to aging. The smoothies, the attaching to people – all of that is part of the cure. After knocking him out, Juliet tells Mulder and Scully not to feel sorry for her. She made a choice and would happily trade in her mortal life for a lifetime in heaven. Now, her mother has a different daughter to cry over.

It’s the ending conversation about prayer that really makes this episode. Mulder may not believe in God but he believes in Scully and will pray through her. When she doubts, he will light her candles with his own.  “Are we together?” Scully flat out asks him. It’s a question I’ve been wondering about all season. She doesn’t give him a chance to answer.  Instead, she talks about how she believed she could protect their son but ultimately failed. She believed they could live together, but she fled. Mulder talks about his regrets. Mulder thinks about what would have happened if she left him much earlier. Scully could have had a better life without the loss, pain and misery she endured by his side. Though he blames himself, she doesn’t blame him for how her life turned out with him. She whispers her prayer to him. She follows that up by saying, “That’s my leap of faith forward and I’d like to do it together.” They’re older, more tired, and beaten down, but now, more than ever, they still have each other.