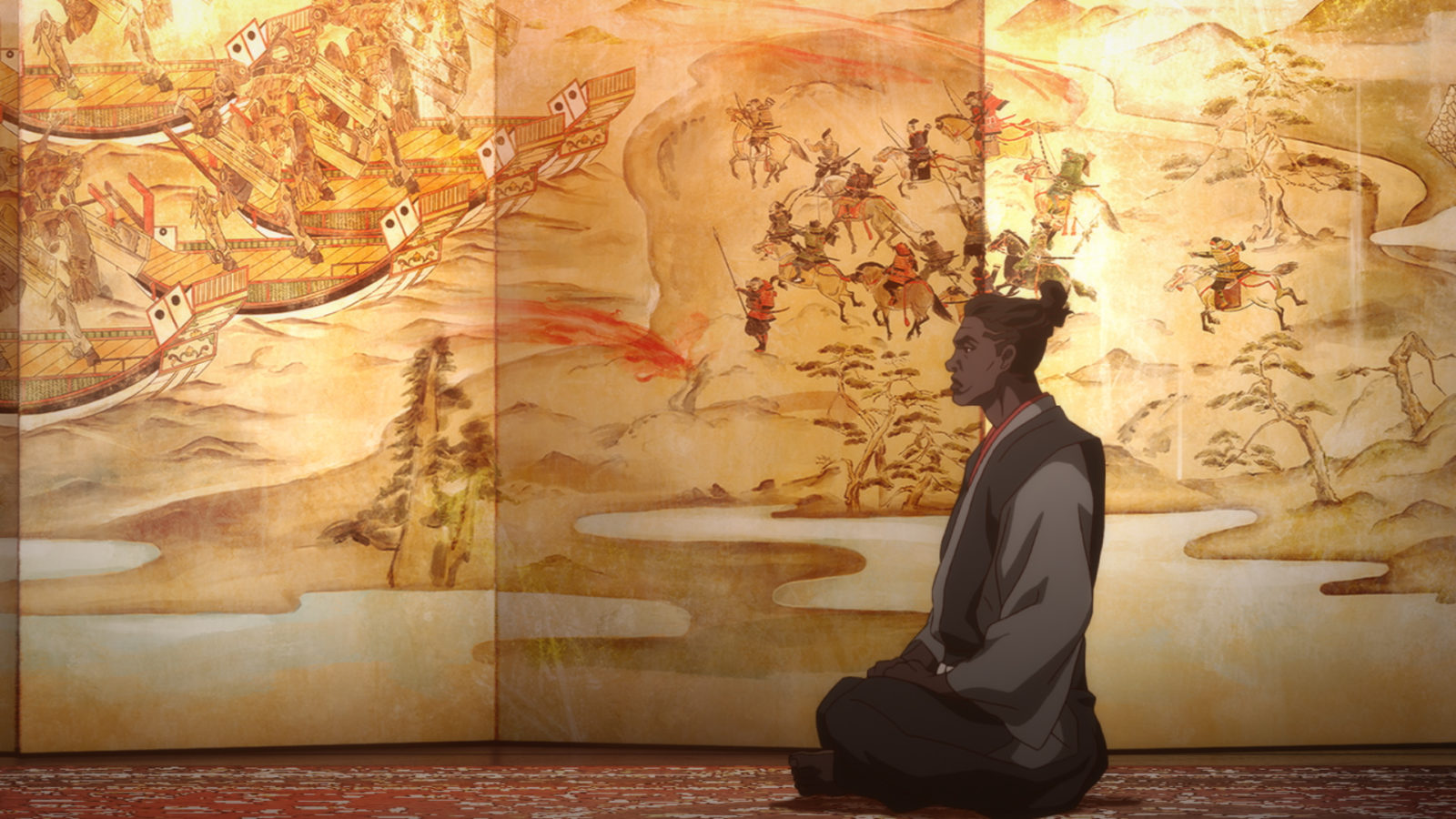 After 150 years of feudal chaos, three heroes emerged to unite Japan and forge a shogunate that would rule the nation. The foundations of this nation were laid by Nobunaga Oda, an audacious autocrat and an accomplished warrior; however, as he made his final reach for power, disaster struck…

Ryoto 1582, a magnificent war between samurais and robots is underway. Mystic powers are utilized to protect the few left. An army of monsters with powers arrive to slaughter the men of Nobunaga (Takehiro Hira). Not far from the battle stands the Honno-Ti Temple. Within the temple, Yasuke (LaKeith Stanfield) informs his lord that the Dark Army is on its way. Drunk Nobunaga questions why Mitsuhide declined his offer for land and how he could be so stupid. He continues to drink as Yasuke does his best to sway him from continuing to drink and to get a move on.

Nobunaga demands that Yasuke takes a drink with him, questions if his son was ushered out safely, then states all that is left is an honorable death. Yasuke states a plan that could stop the army that is on its way. Nobunaga finishes off his drink then appoints Yasuke as kaishakunin, and it is his final command. Just as Yasuke refuses, arrows and fire come through the wall, distracting him. Nobunaga takes the moment to plunge a sword through his body and demands that Yasuke finish his task. Yasuke raises his sword to the words of Nobunaga and with a swipe of his sword, he opens his eyes.

Yasuke awakes in a wooden and messy home twenty years later. He takes a drink before he steps out of his home by the river. Shortly later, he gives rides to people on the boat, catches fish, and throws some to kids he races beside him, then later takes a drink at a local bar where he enjoys a performance of a singer. While he drinks, he is “attacked” by Ichiro (Ian Chen), a young kid who is eager to learn how to fight. Yasuke, known as Yassan to the villagers, leaves, unimpressed by the attack or the kid. Ichiro asks him a lot of questions about how Yasuke learned to fight, then goes on to tell him how he will one day become a samurai. Before he steps into his boat to leave, Yasuke tells Ichiro that a true warrior prays for peace not war. Ichiro replies by stating that war brings peace and peace brings freedom. Yasuke takes his leave on his boat, shaking his head.

In the woods, Ichiro overhears a couple of soldiers attack a man. When he steps back to run, Ichiro makes a sound and is seen by the attackers. He falls as he runs away. When he arrives in the village, Ichiro is questioned by the adults and kids if he fought any bad guys today. He states that he fought two soldiers outside of the village. He is bullied by a group of boys with stones, and he runs off to see his good friend, Saki (Maya Tanida). She’s sick, but Ichiro does his best to make her smile by handing her his bokken. Saki accidentally breaks it in her hands with a strange surge of power. Her mother, Ichika, the singer from the bar, hears Saki cry out from outside. She comes in with medicine and checks Saki’s temperature. Ichika thinks it is time for Saki to see a doctor and mentions it would take a few days to get to him by foot. Ichiro suggests that Yasuke take them on his boat, which will be a day or two, while Ichiro himself protects them. He claims that he will be a samurai someday.

Later in the bar, a very tall woman walks in, asking for vodka. The barkeep doesn’t understand. The woman states that she is looking for a woman with a child. Barkeep states that there are a lot of women with children. Two very drunk men walk in and catch the woman’s attention. She tells them to come with her to have some fun. She chooses one and walks out with him hand in hand.

Yasuke wakes up the next day from the same dream. Today he wakes up to an empty bottle. Outside, he is greeted by two soldiers who hold a knife up to him and question what he has for them. Yasuke states all he has is lunch, gesturing to the fish in his boat. After he leaves the bar, Yasuke is “attacked” by Ichiro again. Ichiro questions how well he did today but is sad when he has to reveal that his bokken was broken. Ichika comes out of the bar and requests that Yasuke take her and Saki to see a special doctor. Yasuke states that the village has a decent doctor and there is no need for them to leave. Ichika insists that her daughter needs to see the doctor or else she will die. Yasuke doesn’t budge on the matter and brings up that the child will die going up north because of the warring territories. When he tries to leave, an upset Ichiro tries to hit Yasuke with his stick then yells at him for having no honor. Yasuke points out that being willing to give up your life isn’t an honor.

1579 in Nanban Trade port, Nobunaga is checking out beautiful merchandise when he overhears a man yelling and threatening to hit a child. Yasuke interrupts the man and asks what honor there is at striking a child. The man angrily yells at the merchant for allowing his servant to speak. The merchant pulls at Yasuke but Yasuke doesn’t budge. He tells the man to leave the boy alone. The man takes his sword and attacks Yasuke. Yasuke defends himself and is able to take the man down and take the sword in the process.

Nobunaga, impressed, applauds Yasuke. The merchant states that he will punish Yasuke, but Nobunaga doesn’t want him to be punished and demands that Yasuke is washed. Nobunaga is surprised that Yasuke’s skin isn’t cleaned off and questions if Yasuke inked it. Yasuke informs him that he was born with black skin. Surprised, Nobunaga asks him what his name is, which Yasuke replies, Eusebio Ibrahimo Baloi. Nobunaga struggles to pronounce the name. The merchant responds by apologizing for Yasuke’s rudeness, stating that the Yao people have a strong cultural identity. Nobunago names him Yasuke, then tells the merchant that he will take him, too. Yasuke meets Ichika and Saki outside of their home late at night, stating that he will take them on their journey.

In Shiga Prefecture 1579, Yasuke is greeted by a female samurai who is ranked Onna Bugeisha. She was at the port the day that Yasuke saved the young boy from the angry man. The boy happens to be her brother. She thanks him for doing so. Yasuke asks about her high ranking and why she didn’t defend her brother. She informs him that the code of samurai forbids her to interfere when honor is challenged. Her brother made a huge mistake and Yasuke has her respect. He asks for her name and is told it is Natsumaru (Ming-Na Wen).

Yasuke wakes up on the boat. Ichika informs him that he snores. Yasuke asks why Saki sweats so much. Ichika asks him why Ichiro wants to be so much like Yasuke and points out that she notices so much about Yasuke, how he is haunted by his past. Yasuke notices her necklace, stating he has seen it before. Ichika asks him why is willing to help now, and Yasuke explains that he was raised in a village where everyone takes care of a child. He points out that he has never seen a child so sick.

As the two talk, the boat stops unexpectedly frozen in place. Fog creeps in. The three are joined by three people (one happens to be another Black man) and a robot. They are surprised by the fact that Yasuke is Black and speaks Japanese. When the tall woman demands the child, Yasuke refuses. A fight breaks out between them. Mystical powers are used by the attackers while Yasuke only uses what he has. When the tall woman turns into a bear, Ichika steps in to help fight. She is able to get the bear woman away but is blasted by the robot and loses an arm. When Yasuke runs toward Ichika and Saki, he is chased by the attackers. An upset Saki screams for the attackers to leave them alone and hits them with a force. While they are floating midair, Yasuke reaches out to Ichika but is only able to get her necklace before landing in the water.

This is a slow start to the series. I was not expecting the supernatural and futuristic elements of the story. I went in with no prior information because I didn’t want anything to hinder my experience of the show. I do wonder how this child and her mother play into the life of Yasuke. Also, how much of this story is true to the real life Yasuke. If you watch the credits, you can see the early lives of both Yasuke and Ichika with Saki. The animation is quite nice.