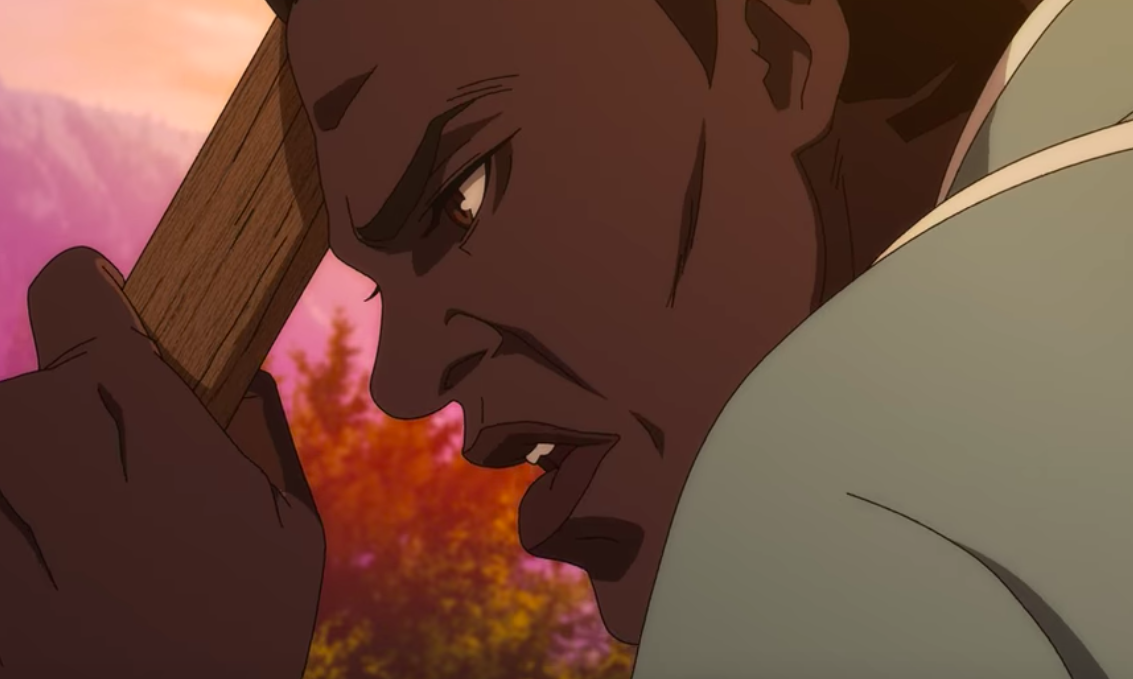 In the village, the priest and bounty hunters drag a chained Yasuke through the town for everyone to see. Once they stop, people have gathered around the priest and his bounty hunters. The priest informs the people that Saki’s mom was murdered by Yasuke. The people whisper about the news until Ichiro yells that the priest is lying. The priest responds by showing the necklace worn by Ichika and asks for Saki to be given to him as he would provide care for her. Ichiro gets close to Yasuke to question if it is true. Yasuke tells him to leave him and forget him.

In a building, the priest has Yasuke, who is tied up, awakened so that he may question him about the girl’s location. They ask what the priest thinks he will get out of Yasuke, but the priest goes off saying that he expects the young girl to be found. The tall lady and the robot go off to search for Saki. The priest speaks to Yasuke about how he lied about the child and the prophecy. The prophecy only spoke about her powers, and he wants to help her get to safety from dark forces. Yasuke tells him to do what he needs to do. The priest takes out brass knuckles then proceeds to punch Yasuke, questioning where Saki is. The robot and tall woman find Saki in the village when Saki uses her powers to get away from them. The tall woman, Nikita, tells Saki that they didn’t kill her mom. The robot blasts at Saki until she has nowhere to go. Saki jumps into a wagon of fish and loses them.

Yasuke continues to taunt Abraham, the priest, until he is knocked back to a memory. Yasuke spars with Natsumaru then talks about the plan Nobunago has for them to attack Hattori Hanzo at dawn. He leaves when Natsumaru reaches out to him, stating they should rest. At night, he notices Natsumaru creeping out of camp and follows her where he sees her speaking to a samurai of another party. Abraham puts down his brass knuckles and instead uses his powers to electrocute Yasuke for information. The other two bounty hunters are surprised to find out that the priest has any powers.

Saki jumps out of the wagon and finds herself in the forest. While walking, she punches when someone comes near, only to find it is Ichiro and three other boys looking for her. Ichiro tells her that Abraham is looking for her and she told them what happened to her mom. Saki insists that Yasuke saved her and her mom. They stay away from Abraham. When her emotions overpower her, Ichiro reaches out to her, but Saki’s powers unleash, resulting in Ichiro being tossed into a rock and knocked out. Saki tries to apologize then runs away. Abraham is pulled off of Yasuke by Achoja (William Christopher Stephens) who thinks that they are wasting their time. They should just go find Saki. Yasuke weakly says, “Forgive me, Natsumaru.”

Tensho Iga War: Natsumaru is surprised by the number of people that Nobunaga has brought for the war, but Yasuke says nothing. Nobunaga revels in how Hattori Hanzo came to attack them as Yasuke told Nobunaga would, much to Natsumaru’s surprise. Nobunaga calls for an attack in which many armed men appear out of the ground to attack the Iga army. During the clashing armies’ fight, Natsumaru saves Yasuke from being blindsided. She points out that he knew where Hattori Hanzo would be attacking. Yasuke informs her that it is because she told him where to be. He’s also seen the symbol on her necklace on the neck of the Iga general he killed, then calls her out for treachery. Natsumaru tells him that she is not an Onna Bugeisha; she is Hattori Hanzo’s besshikime, a warrior in his personal guard, and she was only acting out of loyalty to her clan. She moves to attack him, but he disarms her and kills her with her own sword. Yasuke goes through several memories then imagines himself cutting his own head off, which produces a tree with blooming flowers.

Saki wakes up to the voices of the robot and Nikita then magically apprehends them, demanding to know where Abraham is. Just when Abraham has given the other two bounty hunters the command to kill Yasuke, Saki walks in, glowing in blue light. She uses her powers against everyone who attacks her and even fights against Abraham’s powers. Abraham tells her to come back home with him, but she refuses then uses her powers to attack. When she is worn out, Abraham grabs her and electrocutes her. Yasuke finally wakes up to the sounds of Saki’s screams. He uses his chains to break Abraham’s neck. Abraham drops Saki but turns around to look at Yasuke. Saki uses her powers to put a wooden cross through Abraham, killing him. As they leave, Saki grabs her mom’s necklace from the corpse.

I think I’m starting to connect the dots a little. The necklace in question happened to be worn by Natsumaru and Ichika. They are a part of the Iga clan. I’m not sure if Saki is Ichika’s true daughter, but I am glad that she is not in the hands of Abraham, the mutant priest. I do wonder if Yasuke had any feelings beyond friendship for Natsumaru. Unifying Japan through war seems like a lot of work but Yasuke is faithful to the cause.