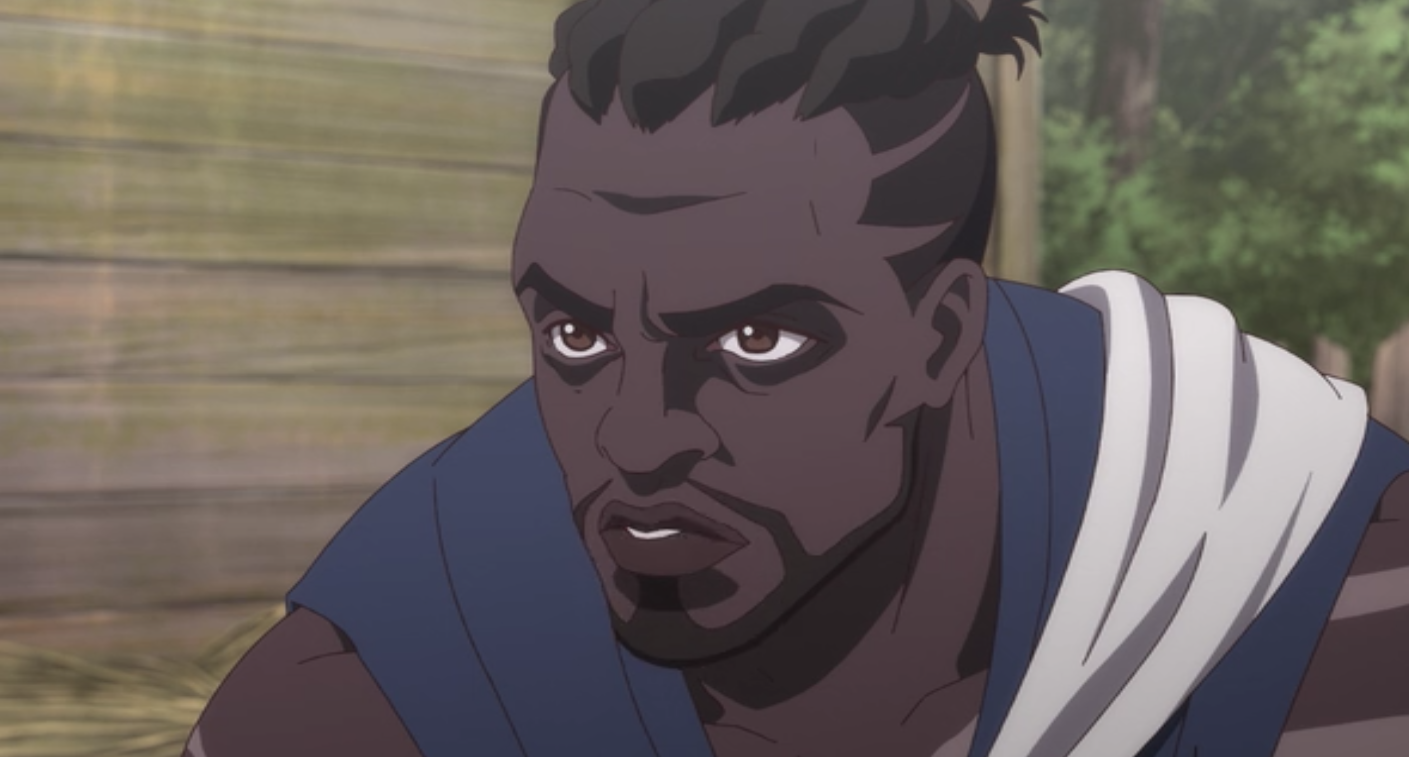 Daimyo (Amy Hill), a creature feasting on the land, is looking for the strong power to allow her salvation from the prison she is in. She gives one of her lieutenants some power.

Yasuke wakes up to Saki standing over him and splashing water on him, wearing his samurai helmet. She apologizes for touching his stuff and splashing water on him. He thanks her for saving his life, stating he owes her the greatest debt, and asks her if she is hurt or still ill. She dodges the second question by asking him about random items he has. Yasuke tells her that she will need to leave the village since the people have seen her powers and they probably have the attention of Daimyo. Saki wants to go to the doctor but Yasuke says he will take her somewhere safe and hidden. Saki uses her powers to throw items at Yasuke and demands to see Doctor Morisuke. Yasuke is surprised by the name before getting hit in the back.

Lieutenant Kurosaka arrives at the scene of Abraham’s body where a small pack of soldiers are gathered. She tells them to burn the place down and continue to search for the power source. Yasuke and Saki discuss Ichika’s plan for Saki to be seen by Morisuke. Morisuke happens to be a soldier who has powers, and it would seem that Ichika was taking Saki to him so she could be trained. Saki asks how Yasuke and Ichika would know a warrior like that and if he will be taking her to see him. Yasuke tells her that they will be traveling by foot. The two prepare to leave but not before Yasuke grabs his sword for the trip. Saki is hesitant to leave without saying goodbye to Ichiro and apologizing.

In the village, Ichiro’s dad is yelling for Saki then informs people what she did to her son. Lieutenant Kurosaka arrives with her soldiers asking what has happened. When she is questioned, she has one of her men hit the woman who questions them. Ichiro’s dad tells them what the kids saw, and Kurosaka has them tell her exactly what happened.

Saki struggles to walk through the forest, tripping over branches. She points out that the road is right there and they should walk on it, but the two see two armed men running down the road. Yasuke states they will need to go deeper. The two stop at a village, where they hear a woman screaming. Kurosaka’s men ask the villagers whether they saw Yasuke and Saki but don’t believe their answers. Saki wants to go in and help but Yasuke stops her. Saki states that a woman is about to die because of them. Yasuke steps in and saves the woman then proceeds to take out the men, one by one.

Kurosaka arrives when the last man dies. She thanks him for killing her men, then the two exchange words before they fight. Kurosaka uses her powers to attack Yasuke, as the two move the fight from the village to the forest. When Kurosaka gets the upper hand by blasting Yasuke then takes an axe to his head, Yasuke swiftly pierces her with his sword. The action jars his memory of when he did the same to Natsumaru and has him frozen.

Kurosaka conjures a small blade to stab him with, but it disintegrates from Saki’s powers. Kurosaka disappears. Yasuke picks up his blade and apologizes to Saki for failing to protect her. Saki points out that she has mind powers and doesn’t need anyone to protect her. He asks why she wanted him to take her to the doctor. She didn’t want to be alone or face anything alone. The two bargain on protecting each other as they continue on.

In another village, the two stop at a bar and Yasuke asks for the doctor. The patrons claim they don’t know of any man named that. While Yasuke and Saki drink tea, they are kidnapped and taken to a building where kids are training. Yasuke introduces Saki to Morisuke (Paul Nakauchi) who greets the Black Samurai. Yasuke states that he is not a samurai in this life but Morisuke insists that he still sees the proud warrior that he once stood next to. Morisuke informs them of how he has had to hide and train kids in preparation of what is to come then asks why Yasuke is there if not to fight. Yasuke informs Morisuke that Saki has powers more powerful than his. Morisuke tests her powers then kneels when he sees how great she is.

Daimyo is disappointed to see Kurosaka without the child. Kurosaka claims the powers given to her were not enough but doesn’t get to finish her sentence as Daimyo takes her life and powers to give to another. Morisuke is surprised that Yasuke is about to leave without staying to fight. He tells Yasuke that Saki will do well there and Yasuke should not run from injustice, but Yasuke takes his leave. Outside the guarded wall, Yasuke takes out two guards then walks through a door in the wall to find an army of men walking towards the village.

This felt more like a filler episode. We get introduced to Daimyo, who is a creature that wants more powers, specifically Saki’s, and has a hand in the wars on the land. Morisuke is a gifted warrior from Yasuke’s path that is basically training an army of kids with special powers. Saki is named the most powerful one. The two had a bumpy journey but at least Saki is finally safe.