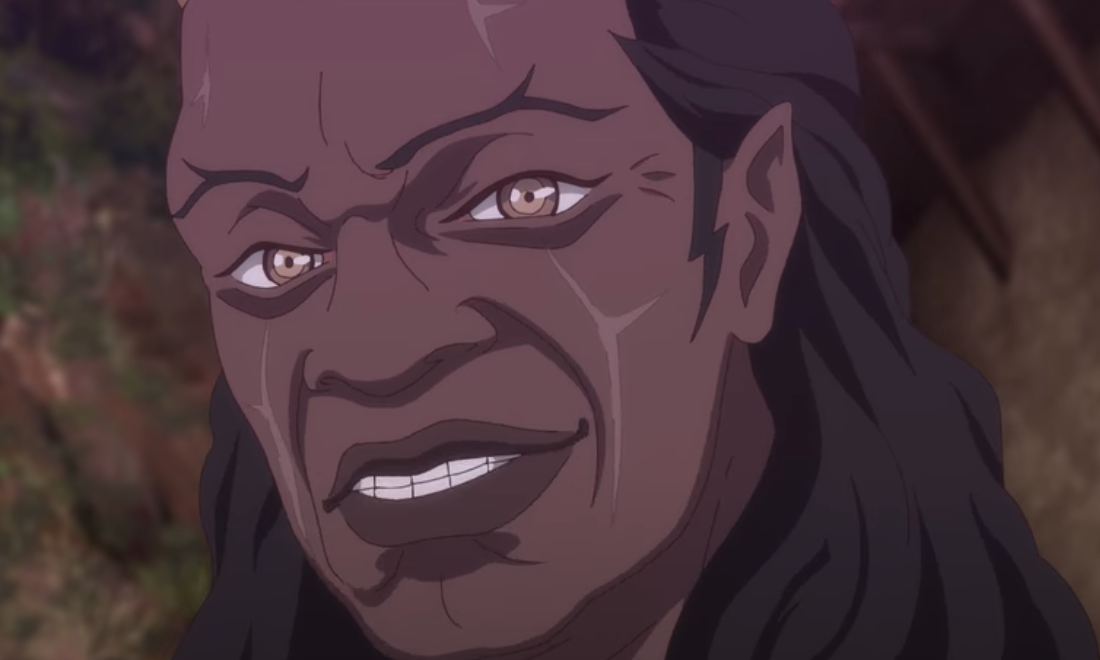 Yasuke informs Morisuke of what he saw outside the walls and asks if this is all the men Morisuke has. Morisuke reminds him that this is a school. Two of Morisuke’s men suggest they hand over what the army wants, but Yasuke refuses. The group is informed that the Dark General’s army has arrived. The Dark General stands with a huge army.

Morisuke and Yasuke discuss their trap for the dark army. Saki groans in pain and unleashes her powers. Morisuke puts blocks around Saki and tells Yasuke that Daimyo is speaking to Saki through the Astral Plane and is after Saki’s powers because they can rejuvenate her, helping her live another century. He thinks that the Dark General is a conduit for Daimyo to connect to Saki’s mind and Saki will need to fight for herself.

Yasuke goes to help fight against the Dark General but not before asking Morisuke to bring her back. Morisuke enters the astral plane. Yasuke gears up and meets the Dark General, stating that he wishes to settle this the old way. The Dark General comes forward and removes his mask; it’s Mitsuhide, who thinks he should have killed Yasuke years ago.

Yasuke questions what happened to the old man and asks him to stop this war so that they can unite Japan. He also points out that Daimyo has turned Mitsuhide against his people. Mitsuhide states that Nobunaga turned his back on his people when he took Yasuke in; he himself liberated the people from their toxic ways. The two exchange words before Mitsuhide boldly claims that he will break Yasuke’s spirit then body. The two spar for a bit. Yasuke informs Mitsuhide that his betrayal is the reason Nobunaga is dead. Mitsuhide says that Nobunago is dead because his loyal servant chopped his head off.

Morisuke finds Saki’s spiritual body in the astral plane. He tells her to prepare for what is to about to happen to her body. Daimyo reveals herself, stating that she is the dark and the balance is tilting towards the night. The two use their powers to fight and pull at Saki.

Mitsuhide and Yasuke continue their fight while Yasuke’s men take their places in the woods to prepare for an attack, flanking the Dark General’s army.  Mitsuhide states the old way doesn’t suit Yasuke, to which Yasuke replies that he knows and lied about fighting the old way then yells attack. Arrows go flying through the air and into the dark army. Mitsuhide is surprised by the stalling tactic, then more of Yasuke’s men come up from the rear to attack.

Morisuke does his best to protect Saki from Daimyo, who is impressed as to how well he is holding things down for a human. He telekinetically communicates with Saki and tells her that Daimyo is trying to take her powers and Saki is the only one able to defeat it. She must free her mind and tap into the life force. Saki does it and appears at the war ground where she touches Mitsuhide while everything is paused.

When action starts up again and Yasuke’s sword clashes with Mitsuhide, an explosion occurs. Everyone is blown away by it. Saki unravels herself in the astral plane and attacks Daimyo. Daimyo is unbothered by Saki’s attack but leaves laughing. Saki and Morisuke awake from the astral plane.

Mitsuhide is surprised to find himself coughing up blood and getting hit. Daimyo’s magic no longer protects him. He instructs his robots to blast through the mountains, unleashing more of his army. They are joined by the bounty hunters who help Yasuke’s men. Yasuke and Mitsuhide continue their fight as Mitsuhide continues to call Yasuke a servant. Yasuke cuts through Mitsuhide, who with his last breaths calls Yasuke the Black Samurai who will always be a servant. Yasuke states he serves no man then swiftly cuts Mitsuhide’s head off.

Back at the school, Saki is happy to see Yasuke and tells her what she went through in the astral plane. Morisuke thanks the bounty hunters for helping them fight. They ask him for the money owed for joining the fight, informing him that Saki spoke to them telepathically, promising them cash. They are surprised that Yasuke is a Black Samurai.

The robot bounty hunter detects an incoming attack but Ishikawa looks out at the field from the top of the wall and sees nothing. While the two talk, the robot has an alarm go off stating that multiple targets are coming fast. Ishikawa turns to look just as the robot states the targets have arrived. Thunder claps and she stands still. The robot calls out to her, but the only movement is Ishikawa falling off the wall. His readings tell him that she is dead, but he keeps talking to her.

They are all attacked by thousands of arrows and take cover. Morisuke looks beyond the gate walls and sees another army making its way towards them. He demands they close the gates. The robot doesn’t go with the rest of the bounty hunters but instead flies towards the army, going into self-destruction mode. The rest of the group runs toward the temple to hide Saki. The robot hits the heart of the army as he blows up but that doesn’t stop them. They climb over the wall and go through the forest. When they reach the temple, Nikita doesn’t go in with the rest but instead turns around to face the army. She turns into a bear and fights them off until she is hit with magical powers that dismember and break her body.

Within the temple, Morisuke points out a back door that will lead Yasuke and Saki out of the temple towards a destination. Yasuke doesn’t want Saki to leave, but Morisuke points out that Saki is the only one with power strong enough to defeat Daimyo. The two leave to go defeat Daimyo as Morisuke, his students, and the last standing bounty hunter hold off the dark army for as long as possible.

I can’t put my finger on it but this episode was pretty nice. In a way Yasuke is fighting all of his demons that are working for Daimyo who somehow knew who to use against him. I’m not really convinced of her evil great power but her army did kill the robot’s friend, which was heartbreaking. Seeing him sacrifice himself for the rest of the team was cute. I’m lowkey annoyed that the world’s fate rests on this little girl’s shoulder.