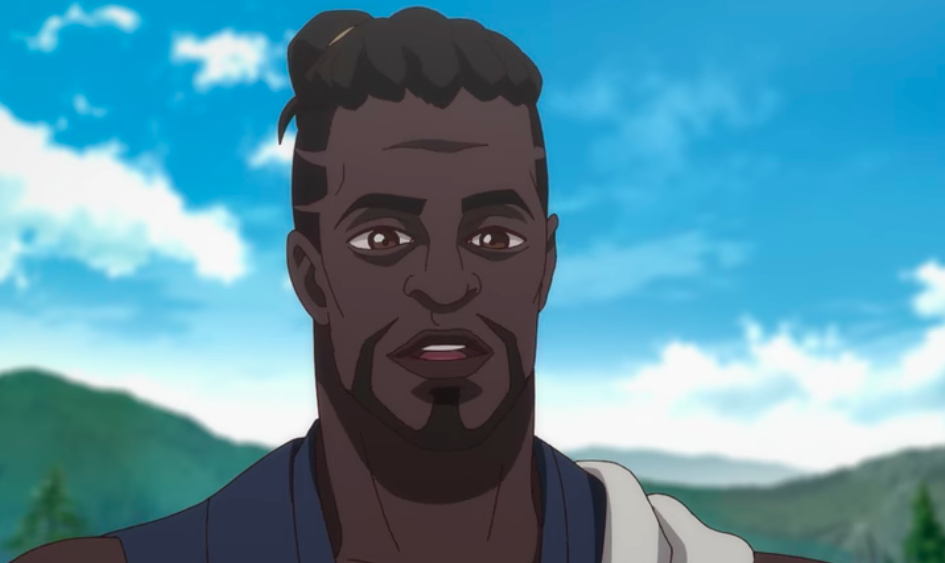 Morisuke prepares his army and students with a speech on how they need to show the dark army what they can’t take from the village. Saki and Yasuke arrive outside of Azuchi Castle where Daimyo is located.

The dark army stands outside of the temple. Morisuke tells his students that it is time. He and the students get into position and unite their powers to shield against the attacks. Achoja states that any blade can get through a shield eventually. Yasuke takes a moment to jump on a robot’s back and snag its wires so that it attacks the rest of the dark army, allowing him and Saki to run past them as they are distracted. He gets to the bridge when Saki finally uses her powers to toss another robot at the men chasing them. The two get into the castle, and Saki falls to her knees. Yasuke tells her she will rest soon but first they need to find Daimyo.

Saki uses her powers to search for her and tells Yasuke that Daimyo is everywhere. While walking through the castle, Yasuke places Saki in a closet, suspecting an attack soon. Daimyo exhales something into him while he has his back turned. Saki comes out of the closet to find Yasuke on his knees, then he starts swinging at monsters around them, claiming they are Iga soldiers. The two are visited by a bloody Nobunago who states that he is there to help Yasuke defeat Daimyo who usurped him. Yasuke kneels to greet Nobunaga and follows him. Saki doesn’t know who Yasuke is speaking to because she doesn’t see anyone.

Yasuke follows Nobunaga up a several flights of stairs then finds Nobunaga’s body tethered to the castle. He is told the only way to get him out is to destroy Hojo Masako, whose power holds him tethered and who must be killed, but we see Nobunaga is truly Daimyo who is tricking Yasuke. Saki calls for Yasuke, stating she won’t leave him, then sees a vision of Daimyo standing over Yasuke. Saki uses her powers to find where Yasuke is located and flies to him. On her arrival, Daimyo Nobunaga tells Yasuke that Saki is the Daimyo and must attack. Yasuke, only seeing Daimyo, rushes Saki.

At the temple, Morisuke is doing his best to hold the wall, hoping that they can give Saki and Yasuke more time. Achoja uses his magic to fight against the new monster that is attacking the temple.

Saki holds off Yasuke’s attacks. Daimyo claims that Yasuke has abandoned her in the same way her parents did when they sold her. Saki does her best to reach out to Yasuke as he continues to fight Daimyo Saki, while the real Daimyo tries to persuade Saki to kill Yasuke while also persuading Yasuke, disguised as Nobunaga, to take his sword and plunge it into Saki’s heart. Saki fights against Daimyo’s power, stating that Yasuke is her friend. Yasuke raises his sword but stops at the necklace around Saki. He now sees Natsumaru from a memory, telling him not to do this. Yasuke thinks it is a trick but realizes that he does see Natsumaru. She tells him that he has honor and tries to do the right thing and has helped his friends like her. Then he sees Saki who repeats words that Yasuke has said to her, and he realizes what is happening.

Daimyo Nobunaga urges Yasuke to kill Daimyo, which Yasuke agrees to and aims his sword at the Daimyo who turns back to herself. Daimyo states that she was just amusing herself and has other ways of taking Saki’s powers then disappears. While Yasuke checks on Saki, the candles within the whole castle go out, and Daimyo reemerges as a giant version of herself then attacks the two, capturing Yasuke in the process. He cuts himself out of her hold then joins Saki. Yasuke realizes that the two of them need to work together to fight Daimyo. Saki protects Yasuke with her powers while he fights Daimyo. Daimyo blasts the two hard enough that it knocks Saki out, disconnecting her from him.

ALSO READ
‘House of the Dragon’ #DragonsYall Recap: “We Light the Way”

Morisuke’s temple gets its roof swiped off by the dark army’s monster. He and Achoja stand to watch as the monster stands over them.

Daimyo captures Saki and does her best to hit Saki with a surge of power but Yasuke stands in the way, taking the hit until Daimyo impales him. Daimyo encapsulates Saki as she begins taking her power. Saki unravels herself from Daimyo’s bounds and reveals herself with blinding light that takes out the castle.

The monster standing over Morisuke’s temple falls to pieces. Achoja realizes that they won and begins celebrating. Their army and village join in. Morisuke comes to realize that the victory must’ve cost them something.

When Saki calls for Yasuke to celebrate their victory, she notices that he is not moving. She sobs over his body until a light shimmers from her to his wound then above them. Yasuke breathes in then gets up, asking what happened. Saki tells him that he saved her. He turns to find Daimyo in a heap, dying, then points out that Saki isn’t looking sick anymore. Saki cheerfully states that she feels more balanced. Daimyo says that won’t last for long, Saki will want so much more that it would take the whole world to sustain it. Saki refuses, stating that she has friends. Daimyo requests that Yasuke kill her so she won’t have to suffer, but he refuses, stating the people she tormented will decide her fate. Outside the temple, Morisuke is pleased to see Saki and Yasuke alive. The men celebrate.

Yasuke and Saki walk back to their village. Saki is worried about how they will treat her, but the villagers are happy to see the two, stating that they have been dealing with Daimyo’s old guards. They also have heard what Saki did and call her one of their own, to her surprise. Ichiro, on crutches, comes out to see Saki, still her friend. His parents state they all owe her so much and offer her a place to stay. Ichiro asks Yasuke if he is back, but Yasuke states it was never his home but a retreat. Then says he can stay until Ichiro’s training is complete. Saki offers Yasuke her mother’s necklace to hold until she is older. She and Ichiro go inside to check out the toys he was given when he was knocked out. Yasuke watches them with a smile.

After credit scenes: Yasuke visits Natsumaru’s gravesite where her little brother, now older, is standing. He states he remembers Yasuke when he saved him years ago. He asks if Yasuke sent his family the chest of Nobunaga’s gold and states that Yasuke is the only one who spoke of him like a friend. Yasuke hands him Natsumaru’s sword. He asks Yasuke how she died, to which Yasuke responds that she died with honor for her clan. The young man bows then thanks him but Yasuke is gone.

Yasuke walks through the forest, clean, shaved, and happy.

A nice little ending to the story. Who knows if they will live happily ever after. The story gives closure to the friendship that Yasuke had while in the army. However, it doesn’t go deep enough into the life Yasuke had as a samurai. That is where I feel the show fell flat. I wasn’t expecting huge element of supernatural and futurism with robots. Quite frankly, I wish that it focused on the historical life of Yasuke. I digress. The story has a slow start but does wonderfully with visuals and music. LaKeith does wonderfully as a tired, drunk samurai who wants to live in seclusion but gets wrapped up in a supernatural fight that didn’t end at the death of his lord Nobunaga. I could listen to him talk all day. I would be lying if I didn’t state I’m curious if this where the story ends for Netflix.