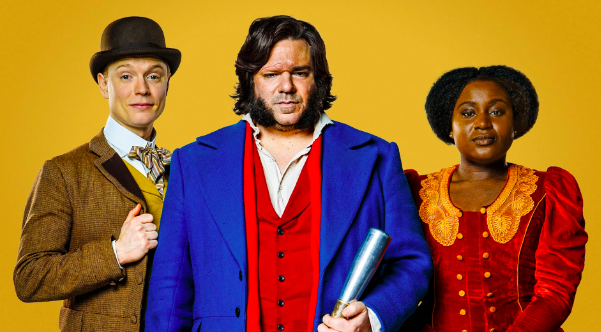 IFC’s Year of the Rabbit is a sidesplitting good time!

Most comedies find their footing after the first episode or even first season, but Year of the Rabbit manages to be hilariously funny from the onset. With its comedic timing, great acting, and time-period quips, this show parallels those of fan favorites. There is so much to love about this Victorian police comedy.

The director of this series is Ben Taylor. He is noted for directing Sex Education, a series on Netflix, which has received positive reviews from audiences and critics alike. This alone would be enough to get viewers to watch his latest series. Yet, when combined with two terrific writers, the show cannot be anything but hysterical. The two writers, Kevin Cecil and Andy Riley, have won Emmys for their work on Veep. So, it comes as no surprise that these two powerhouses have joined together again to produce a work that captivates with humor.

What this show has that many other comedies don’t is its principal characters. The leader, Rabbit, played by Matt Berry (who also plays a vampire in the TV series What We Do in the Shadows), is magnificent. When Berry steps onto a set, you know exactly what you are getting. Keep your eyes on him, because you are going to have a good time. Freddie Fox plays the sidekick, Wilbur Straus. He is a goofy, hard not to love, overall good person, who had the misfortune of being paired up with Rabbit. But, to our good fortune, he does so without missing a comedic beat. Susan Wokoma plays Mabel Wisbech, who wants to be more than just a police chief’s daughter and who later becomes known as a police officer. This surprising odd-ball trio works together to protect and serve the streets of London.

Wokoma as Mabel really steals the spotlight in this comedy. She does so with a lot of elegance, perseverance, and resilience to become the first ever female copper, but not only that, she also manages to become a part of a dynamic trio force. With intelligence, grace, and an almost unbelievably tight corset, Mabel Wisbech keeps up and even outperforms her colleagues when it is time to shine.

The detective police comedy is set in the Victorian era and delivers appropriate time-period insults to its criminals. Rabbit finds himself in the midst of an all-female secret society. Their plans are deliciously evil, and they are ready to serve it at a moment’s notice. Each step this matriarch gang takes allows them to move ever closer to the final reveal. The criminals who attempt, with much fault, to advance their flawed and corrupt plots are stopped in their wake by Rabbit, who foils their misdeeds.

This cannot be said enough: While watching this comedy, it was refreshing to see a show that takes place in the Victorian era. As a scholar who genuinely enjoys Victorian literature, I found seeing this on the screen allowed the era to feel more relevant than before. The costumes are perfectly dirty, and the peasants’ sense of hunger and sadness permeate the screen. This world has children running around selling odd items, and one cannot help but to laugh at all the material these kids have to offer their fellow citizens.

The short British program, Year of the Rabbit distributes laughs after laughs with each episode. The marvelous use of sexuality in the show helps to dispel certain stereotypes of the Victorian period, as well as helping to draw out the world around them. Year of the Rabbit utilizes lighting by not simply posing their actors in the best light, but by making lighting jokes. The light that is powered by electricity is constantly being thrown around, but there are some ladies whose beauty only shines in the light of a smoky lit room. The power women have in this series only pushes this comedy to its height. From the helpful sidekick, all-female gangs, and even the bartender, each one uses their skills to help, hinder, or point Rabbit in the right direction.

A historical comedy that breaks from other period pieces has come to answer the question, can the Victorian era be funny? After watching this, the answer is clearly yes. This is just the kind of adult comedy that is needed after a long stressful day. If you are a fan of comedy, love to laugh, and enjoy spending a few hours relaxing in front of the television, then this series has to be on your must-watch list. The show has a short run, maxing out at six episodes for the first season, which can allow for even the busiest of persons to enjoy an episode or two.

Bresha Webb: From ‘Love That Girl’ and ‘Marlon’ to IFC’s ‘Sherman’s Showcase’