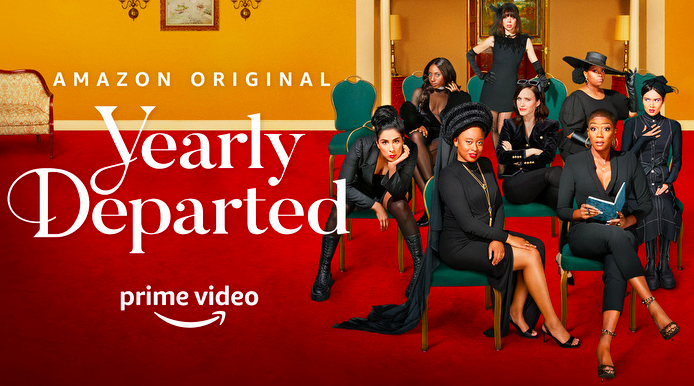 There is no shortage of COVID-19 jokes. Thanks to Saturday Night Live, late-night chat hosts, Twitter and everything and everyone in between, we’ve heard a plethora of jokes about the amorousness quarantine-life can cause for single people while married types gripe about spending far too much time with their spouses and virtually educated children. And apparently, everyone is going about their days sans pants.

What sets the new Amazon Prime comedy special Yearly Departed apart is that viewers will get to hear some of the funniest women in America lampoon everything from noncommittal coitous to society’s racial reckoning when it premieres Dec. 30.

Big names such as Tiffany Haddish and Sarah Silverman share the spotlight with the lesser-known Patti Harrison and Ziwe. There’s also Rachel Brosnahan, who doubles as an executive producer, and not one, but two Natashas -— Natasha Leggero and Natasha Rothwell. And Phoebe Robinson of 2 Dope Queens fame expertly emcees the show, which is set at a faux funeral, affording all of these brilliant minds a platform to step up and flippantly eulogize this dumpster fire of a year we all know as 2020.

While some deliveries are stronger and funnier than others, there is a sense of appreciation in knowing a sisterhood of comedy synchronized to make us laugh, if only for 45 minutes.

Not surprisingly, the strongest sets come from Haddish and Silverman, who bookend the special with Haddish opening and Silverman closing. Haddish, who delivers a refreshingly and uncharacteristically droll set, jokes about the death of casual sex and noticeably benefits from having writers Akilah Green (A Black Lady Sketch Show) and Bess Kalb (Jimmy Kimmel Live) on her team. To be sure, Haddish is naturally funny.  She references the “British nature man’s voice” when talking about David Attenborough, for instance, and compares not wearing a mask to having sex without a condom in ways that only she can. However, her delivery on Yearly Departed for these jokes and others proves why sticking to a written routine matters.

Silverman’s conversational style remains and when she lays to rest “Making America Great Again,” the seasoned comedian cleverly waves good riddance to MAGA and Donald Trump’s divisive presidency without ever saying his name. An always sardonic Silverman runs down the worst grievances Trump committed during his four-year term and perfectly punctuates the way No. 45 botched the handling of COVID-19 by even mentioning the late Herman Cain. These are not jokes for Trump supporters but then again, neither is this special.

Detractors will most certainly note how liberal and Blue leaning Yearly Departed is but again most mainstream comedy is. Honestly, Americans would be hard pressed to find pro-Trump standups. So, anyone watching Yearly Departed in hopes of getting away from politics and pressing social issues will have to get her kicks elsewhere.

Brosnahan jokes about gender pay disparities — though this does make one Google her much-written-about pay bump in season 3 of The Marvelous Mrs. Maisel — and gives a nod to the #MeToo movement. And Rothwell (Insecure) condemns Hollywood’s tendency to valorize cop culture. Rest in Peace, police procedurals? Not quite. A new season of The Rookie premieres on ABC the first week of January.

Ziwe’s set is arguably the most confrontational because she tackles America’s post-George Floyd racial reckoning by eulogizing beige Band-Aids and castigating performative anti-racism. The end result is a sobering and satirical message that is less about punchlines and more about poetic witticism. Ziwe and her satirical blend of symbolism and snark feel both out of place and perfectly placed. Viewers will laugh along with Haddish and Silverman but Ziwe? She’s going to make more than a few stew and think about her words long after the credits roll.

Provocative is better than overreaching, which is unfortunately how Leggero’s bit comes across. Leggero, who is best known for her pithy takedowns on countless Comedy Central roasts, flounders in her attempt to satirize childcare, or a sad lack thereof, for overwhelmed parents surviving the pandemic. Her best joke about motherhood compares loving her daughter in microdoses the way one does with LSD. There’s also a funny mention about wildfire causing gender reveal parties. The rest of her pandemic parenting material, which she serves up while wearing ripped hosiery and smeared mascara, consists of derivative poop jokes and quips about food delivery apps. This is the part of the special that Leggero and the writers needed to develop better.

Harrison’s ode to the end of wealthy social media influencers is equally undercooked unfortunately and also would have benefited from a fresher and deeper approach. Although Harrison lands a few zingers about vaginal rejuvenation and excessive boating, the cleverness gets eclipsed by social media lingo and far too many shrug worthy Enron references. Both Harrison and Leggero should have followed Robinson’s less is more approach which allows the emcee to seamlessly transition between comedians with aplomb while referencing everything from Sterling K. Brown to the horrors of 2020.

“We are here to tell you to rest in peace,” Robinson says to 2020. “Even though you destroyed every ounce of ours.”

The fact that the special ends with a surprise musical guest and later, Avenue Beat’s “F2020,” helps maintain Robinson’s upbeat tone and that of the show. Because more than anything, Yearly Departed, even with its weakest and most somber moments, is a really good time. It’s a great way to grab a drink or two and bond with girlfriends if only over Zoom. Heck, even this very special came to be through clever and cautious social distancing and green-screen maneuvers, an act that couldn’t sum up 2020 any better if it tried.