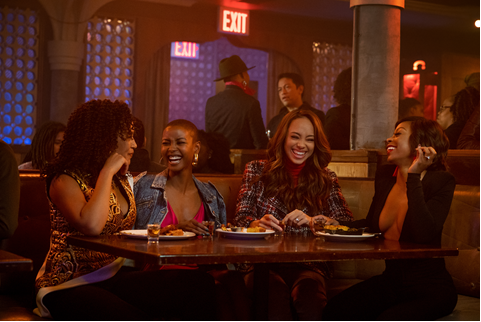 Starz, a Lionsgate company, released the first look trailer and photo from its new STARZ Original series Run the World. The eight-episode, half-hour series is created by Leigh Davenport (The Perfect Find, Wendy Williams: The Hot Topic, Boomerang) who will executive produce with showrunner Yvette Lee Bowser (Living Single, black-ish, Dear White People). The series is currently filming in Harlem and is produced by Lionsgate Television.

The trailer gives us a glimpse into the lives of Amber Stevens West (The Carmichael Show) as “Whitney Green,” Andrea Bordeaux (NCIS: Los Angeles) as “Ella McFair,” Bresha Webb (Marlon) “Renee Ross” and Corbin Reid (Valor) as “Sondi Hill,” accompanied by bustling scenes of Harlem and Manhattan, and the vibrant sounds of Kaytranada’s hit track “Together.”

Run the World is the story of a group of Black women – vibrant, fiercely loyal best friends. At its core, it’s an unapologetically female show about enviable friendship and not only surviving – but thriving together.