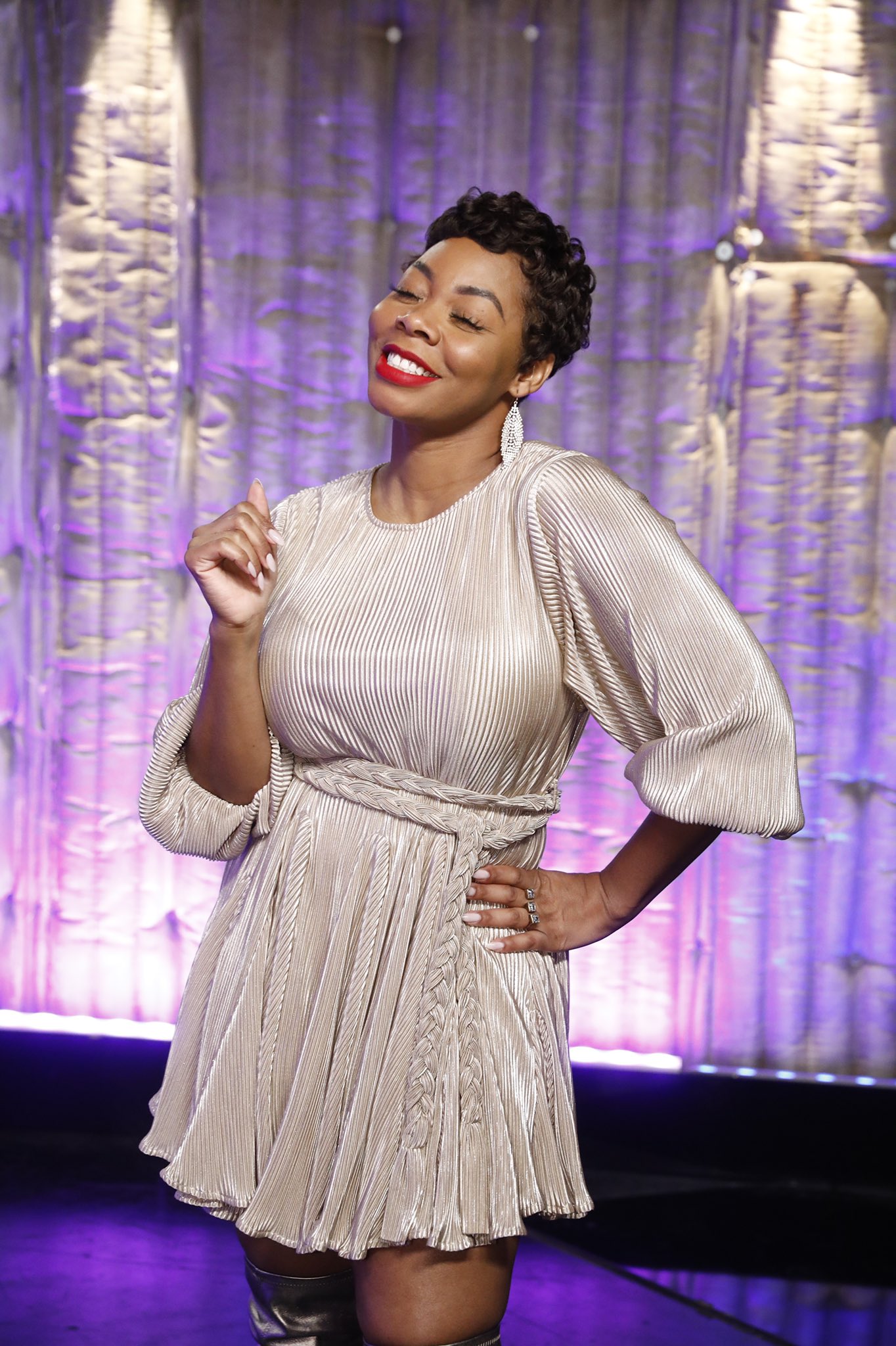 It’s all about timing when it comes to Zania Alaké’s journey to the national stage on NBC’s The Voice. The Detroit native tried to audition for The Voice before, but was unable to get to the blind auditions. Alaké is a young mother of two who worked full time in the banking industry. She’s always been able to scratch her creative itch by performing locally and producing her own content such as her Anita Baker revue and her single Tempted, which can be found on Facebook. Alaké’s voice is smooth and while she has range, it’s her Anita Baker-esque contralto that really allows her to shine.

Even though she enjoyed these outlets, she knew from a young age she was meant to be a star. She began singing at a tender age and was placed in a performing arts school by her mother. She was looking for a way to make music her full-time career while also making sure she upheld her responsibilities to her family. The opportunity for The Voice came around again, and, after a lot of soul searching, Alaké decided to give it one more try. For the first time, submissions were accepted virtually and Alaké’s audition was selected.

I got to sit down with Alaké over Zoom and talk about her journey on The Voice and the surprising source of the best advice she’s received.

Black Girl Nerds (BGN): I’ve always been very involved with American Idol, X-Factor and The Voice, any of the singing competitions. But I find that in order to really segue into a career and make a name for yourself, you really have to go above and beyond. I love the story that you’re a banker. Being in finance and trying to do the entertainment thing is great, but they’re are bills that have to be paid.

BGN: Exactly! So I wanted to ask, I know you were able to scratch that itch by performing locally and producing your own projects and music. What was it that pushed you to audition for The Voice?

[Alaké tells me the story above and adds on that it’s all about timing.]

ZA: You don’t realize that until you’re going through it. Timing is everything, it’s all about timing, but when you actually live it, you can be like, “Now I see!”

BGN: I love that you have such a timeless sound and it’s one that can fit into any generation, or any style of music, but of course I feel the time we’re in has such a specific sound. What is it that sets you apart as an artist, or that makes your voice unique in the current musical landscape?

ZA: I listen to a lot of Ella Fitzgerald and songs from the classic era. Those are my go-to’s and for so long I was trying to figure out, “How can I fit that into what’s going on today?” Some people might not accept it, but somehow it’s working out for me! I’m just gonna keep going down this lane.

[Alaké has already amassed a popular fanbase thanks to the show. They love her flawless tone and impeccable control. She seems to have a natural grace under pressure. I asked how she was able to maintain her composure when judge John Legend turned his chair for her. When Legend turned his chair for Alaké (later followed by Kelly Clarkson), his hands immediately went up and he began to groove to her dulcet tones.]

BGN: So how did it feel the moment that John turned his chair for you? Was it hard to continue performing? Did you just want to scream? Tell me about what you were feeling.

ZA: I probably screamed internally! [Laughs.] I try to keep it internal. No matter what type of distractions you have, you need to keep singing that song, keep performing. You never know who needs to hear that, you know? You’re entertaining and you gotta know how to block things out. But when [Legend] turned around, I literally felt like it was just a relief. He opened his arms and I was just like, “Oh my God, thank you!” He turned so fast for me!

BGN: While watching the blind auditions, I saw your beautiful children. Your son said, “That’s my mama!” after you performed and the audience started applauding. How do you maintain your balance between trying to chase your dreams and maintaining your family?

ZA: It is extremely hard, but I have so much help. From my kid’s father and my parents, my sister, I have a lot of help, so I’m thankful for that. Before I had my son, it was a stressful time for me. I was trying to figure out, “Okay, I want to do singing, but I’m about to have a baby! How am I gonna…” But somehow it all worked out. I had everybody I needed in my corner so I’m thankful for my support system.

[After being selected for a team, each member is introduced to their team’s mentor and a mega mentor. Normally, huge industry names are pulled and this year was no exception.]
ALSO READ
Kat Graham Partners with GLAAD & Announces New Album, 'Long Hot Summer', Out June 3rd

BGN: How excited were you to find out that Snoop Dogg was the mega mentor and Brandy was the mentor for Team Legend?

ZA: It was intense! So let me start with Brandy. The vocal bible? She’s got it in the bag, so when I first saw her I was like… “That’s not Brandy.” Then she started to move around and I was like, “Oh, she’s real!” After that, I centered myself because I still had a job to do. She gave me some extremely good tips about breath support and things that help me get through those tough or high notes. Actually seeing Snoop was interesting, because he was so unexpected. But he literally gave me the best advice. You never know how people will turn out, so don’t judge a book by it’s cover. You never know what kind of experience somebody has to make you better.

It was beneficial for Alaké to learn from someone who had been a vocalist for so long. Alaké certainly has taken the advice to heart as she’s sailed through both competing rounds. The Voice has several stages after the blind auditions. During the battle rounds, coaches create pairs within their team and they sing a duet, after which one is eliminated. Alaké won this round against Durrell Anthony singing the BeeGee’s Emotion. The knockout rounds allow contestants to choose their own songs to compete against others in their teams. Alaké delivered an excellent performance of If I Were Your Woman by Gladys Knight and won the round over Rio Doyle. After winning these rounds, Alaké will advance to the live rounds where viewers will decide how far she continues.

BGN: Both Rio and Durrell were fan favorites. Even though it’s a competition, is it hard to be competitive with someone that you respect as a vocalist?

ZA: Wow, that is a very good question. At the end of the day we’re all here for a reason. It’s not necessarily that we’re here to gain friends, though that’s a great advantage. It’s not the reason we’re here. I adore Durrell and Rio, their spirits and their personalities are awesome. But my goal? Is to win this thing! So here I am!

BGN: So what’s the feeling that you get when you do win these rounds? Is it vindication, validation? What goes through your mind?

ZA: I would say validation and relief. A lot of the times, like when I’m going over my music, I’m like, “Am I doing this right?” I want to make sure I’m delivering the song in a great way. So when they call my name it’s like what I’ve been doing for years is really starting to pay off.

BGN: Live rounds are just around the corner and the contestants are working with the mentors to prepare their final numbers. How do you mentally prepare for something like that? It’s as “on the spot” as it gets. And do you have a song in mind that you want to perform?

ZA: I have a few things in mind… [Laughs.] I mentally prepare by trying to meditate as much as I possibly can, before I even get out of bed, because there’s so much pressure right now. Everything is moving at a fast pace at the moment so you have to learn songs more quickly; you gotta be prepared for whatever they throw at you. So yeah, meditation, I do my vocal warm-ups every single day and go for walks. I try to center myself and stay fit. Just understanding that I’m here for a reason and I don’t beat myself up too much when I don’t think I can do this because I know I can.

BGN: Confidence is something that everyone is born with their share of, but in order for it to grow it needs to be nurtured, fed, and shaped. Collectively, what lessons have you learned from judges Snoop Dogg, Brandy, and John? I know you kind of mentioned a few things, but was there anything overall that you’re learning from them?

ZA: Yes! So overall, it’s very important to tell a story. You have to tell a story with whatever you do, you can’t just get up there and sing the song. You want people to feel and love or maybe even hate with you. To have some type of reaction. So just telling the story is key.

BGN: What would it mean to you, your fans and family if you won The Voice?

Alaké’s performances are filled with passion and each performance does seem like its own little musical story. You can tell she understands the lyrics intuitively and can tell a story in a flawless run. Be sure to check out Zania Alaké’s journey on The Voice, which airs Monday nights on NBC.