This year was my first year as an attendee at AwesomeCon, and I must say it was pretty AWESOME.  Inside of the grandiose Walter E. Washington Convention Center was everything a nerd could ever ask for.  There were bottomless piles of comic books everywhere, arcade and tabletop gaming centers, cosplay contests, celebrity guests and so much more!  I was only in town for one day and couldn’t soak up the con like most patrons, but the few hours I had was a blast.  I’ll walk you through my journey. 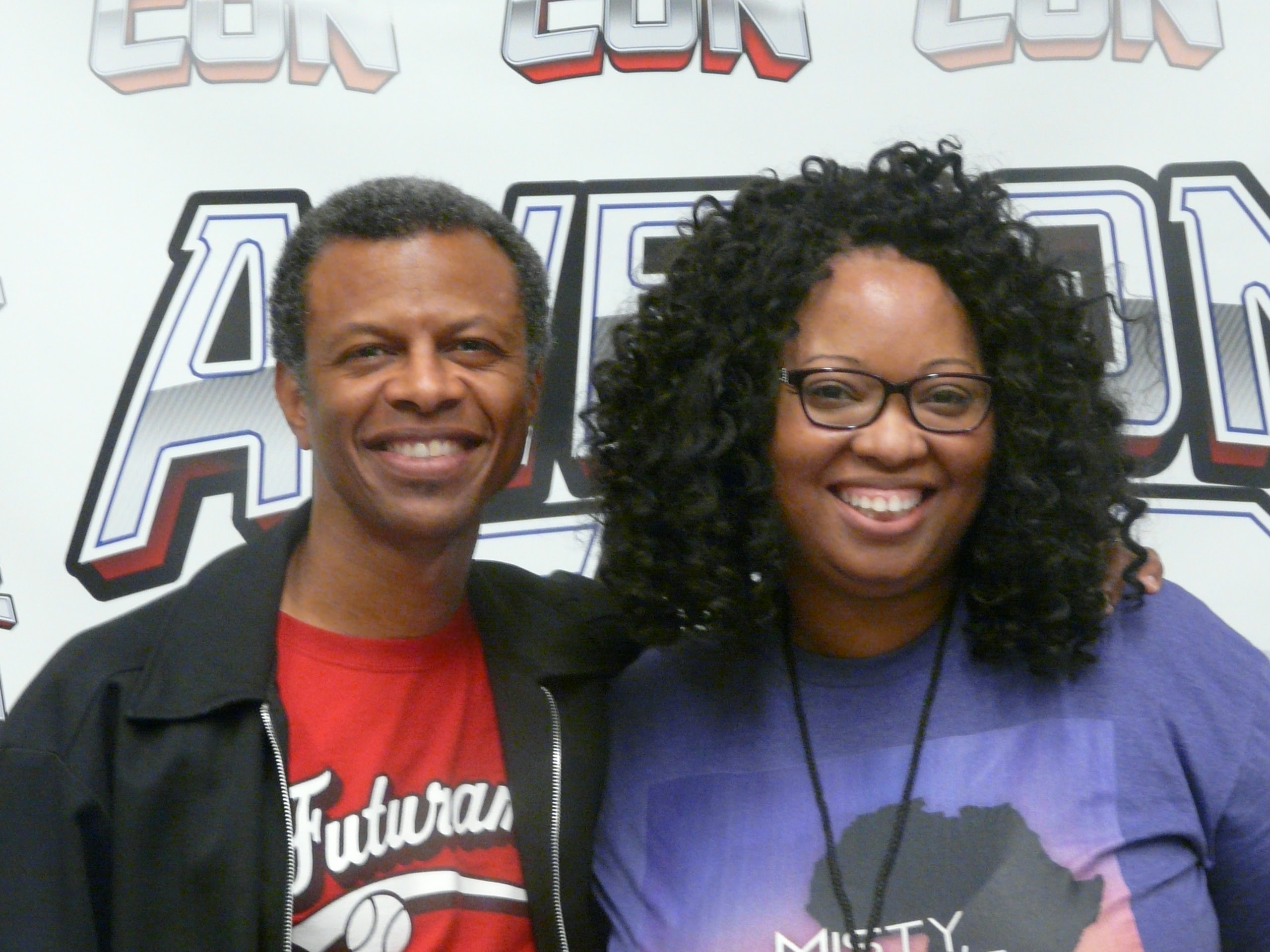 I was committed to reach out to Universal Fan Con guest Phil LaMarr because he’s been so gracious to work with us (in case you didn’t know I’m a co-founder of the con) and I’ve been a fan of his for years, so I had to ask about his work as not only a voice actor but his work in TV and film.  Stay tuned to our interview on the Black Girl Nerds podcast.  Lamarr chats about his work at MadTV and how we met on Twitter during our #90sLiveTweet of Pulp Fiction. If you don’t know already, LaMarr has voiced several animated characters over the years on shows such as; Samurai Jack, Futurama, Justice League Unlimited, and Static Shock just to name a few.  His resume goes on for miles, and he touched on parts of his work as a voice actor and also filled us in on the work/life balance between working conventions and working on acting gigs.  It was a funny, entertaining, and informative interview. 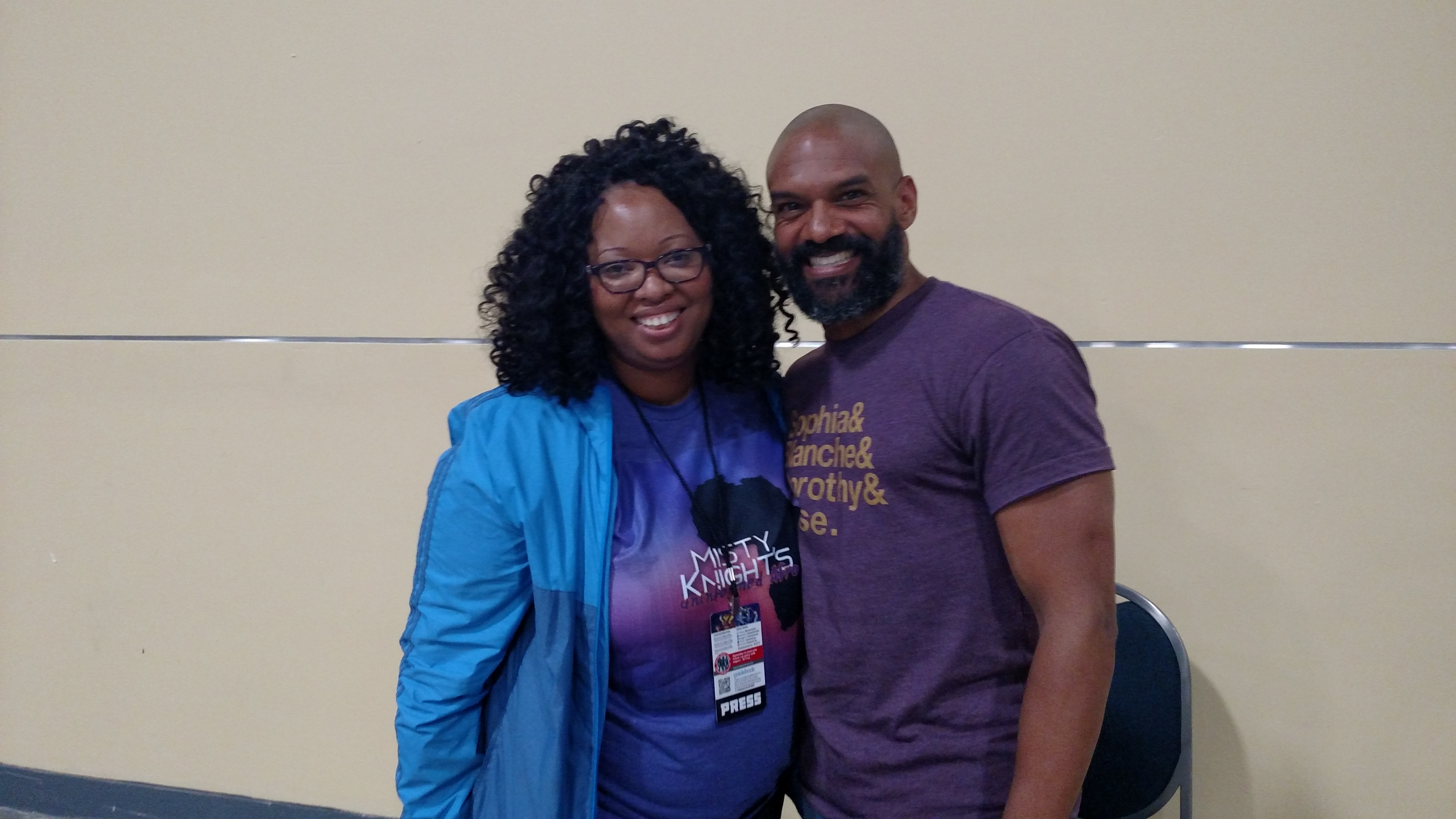 Shortly after interviewing Mr. Lamarr, I scored a second interview with yet another prolific voice actor Mr. Khary Payton.  Payton is solely responsible for the popularity and resurgence of Cyborg; who you know best from Teen Titans. Payton is also currently starring in AMC’s The Walking Dead as King Ezekiel.  We talked about everything from Ezekiel’s wig to an interesting tidbit about Payton once doing training videos at Sally’s Beauty Supply store.  We also chatted about Cyborg and his gateway into the DCEU with the impending Justice League movie coming out.  There will be a lot of laughing in that interview since Payton likes to make you laugh and feel at ease.

I walked down the exhibit hall and throughout the convention center and took some photos of cosplayers.  I have to say, the cosplay from one year to the next just keep getting better and better.  The cosplay community never ceases to amaze me! From Garnet of Steven Universe to Ruby Rhod from The Fifth Element. 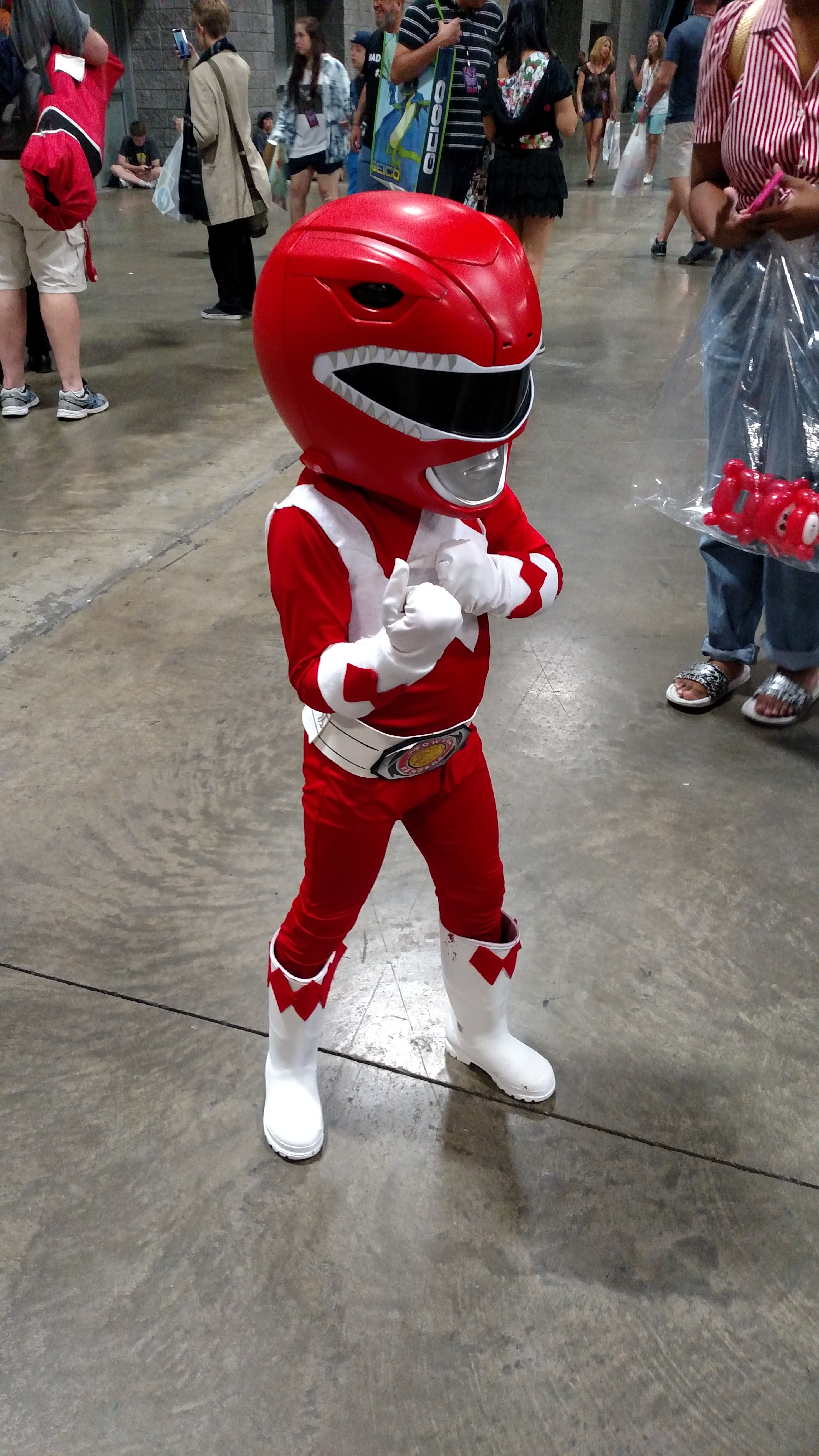 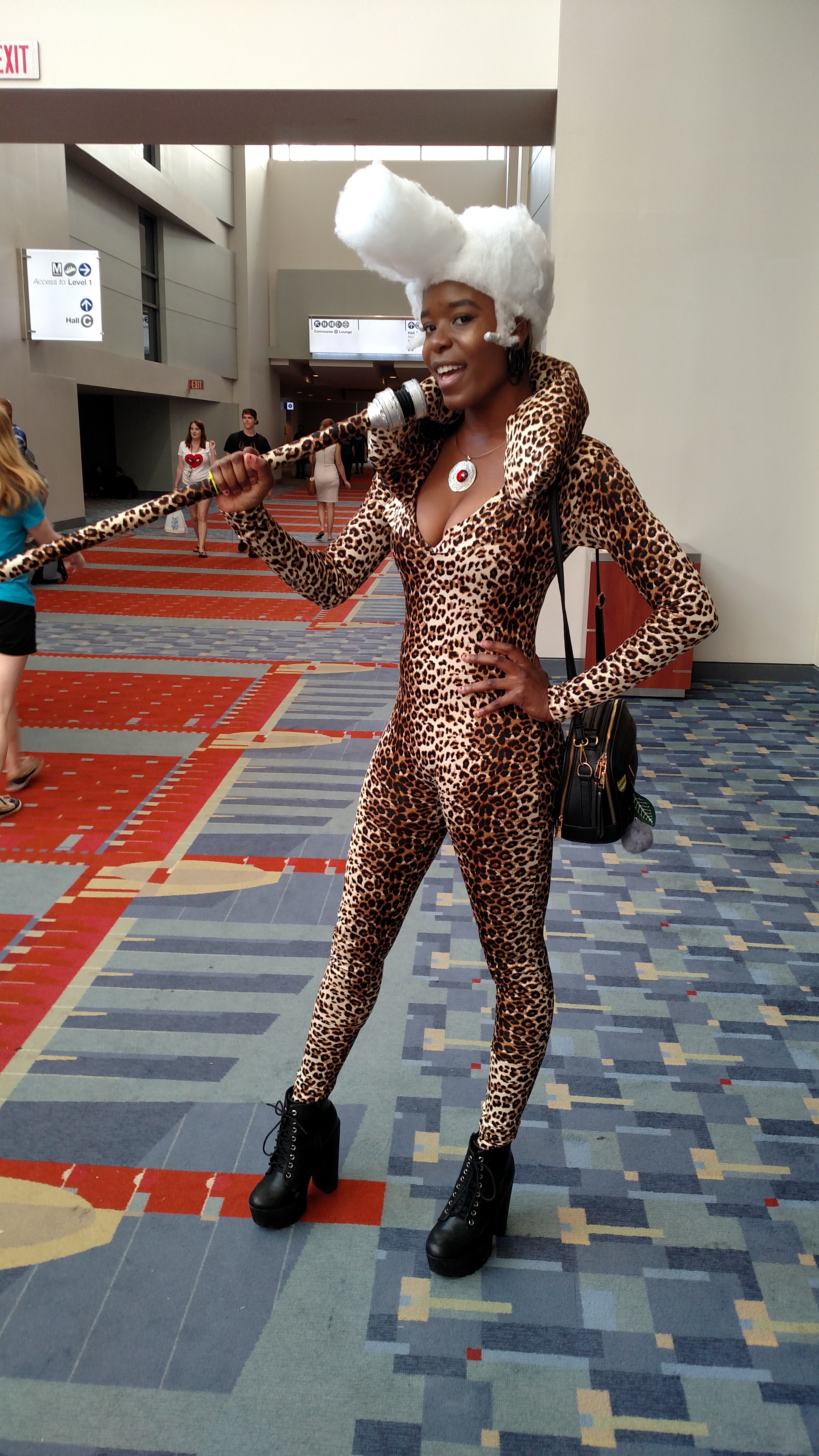 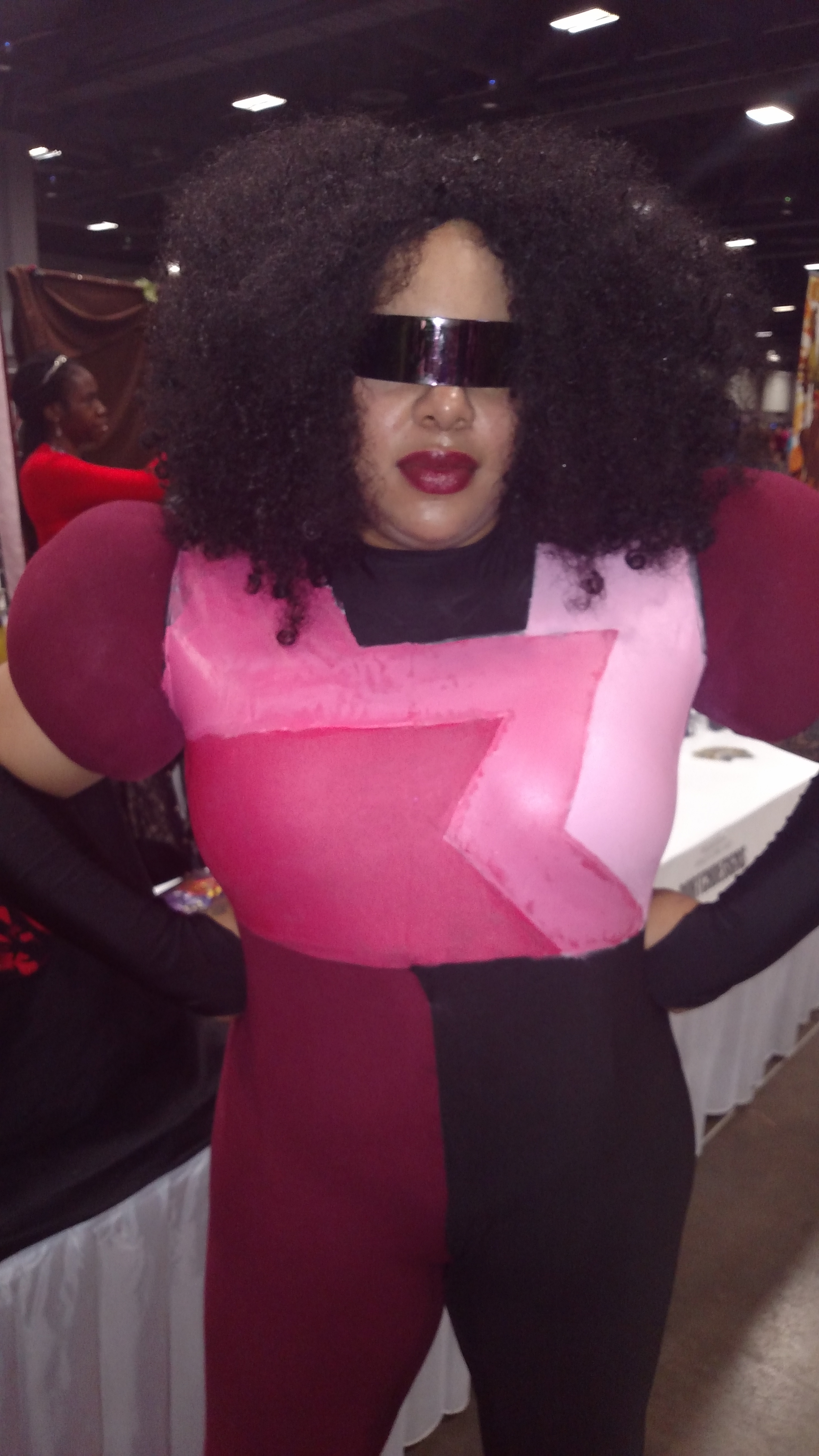 I decided also to try to check out some panels but was only limited to sitting in on one since most of my day was consumed by interviews.  The consumption was worth it of course, but for me, the best part of cons, are learning new things and hearing different perspectives from experts and influencers on their work and how they got there.  In this case, I decided to peep the panel Blacks & Women: True Diversity In Comics.  I will selfishly admit, the moment I saw a panel on the program that had the words Black, Women and Comics in it, my interest was piqued.  I was ready to explore, absorb and grow from this discussion that was about to take place.

Sadly, I was sorely disappointed. 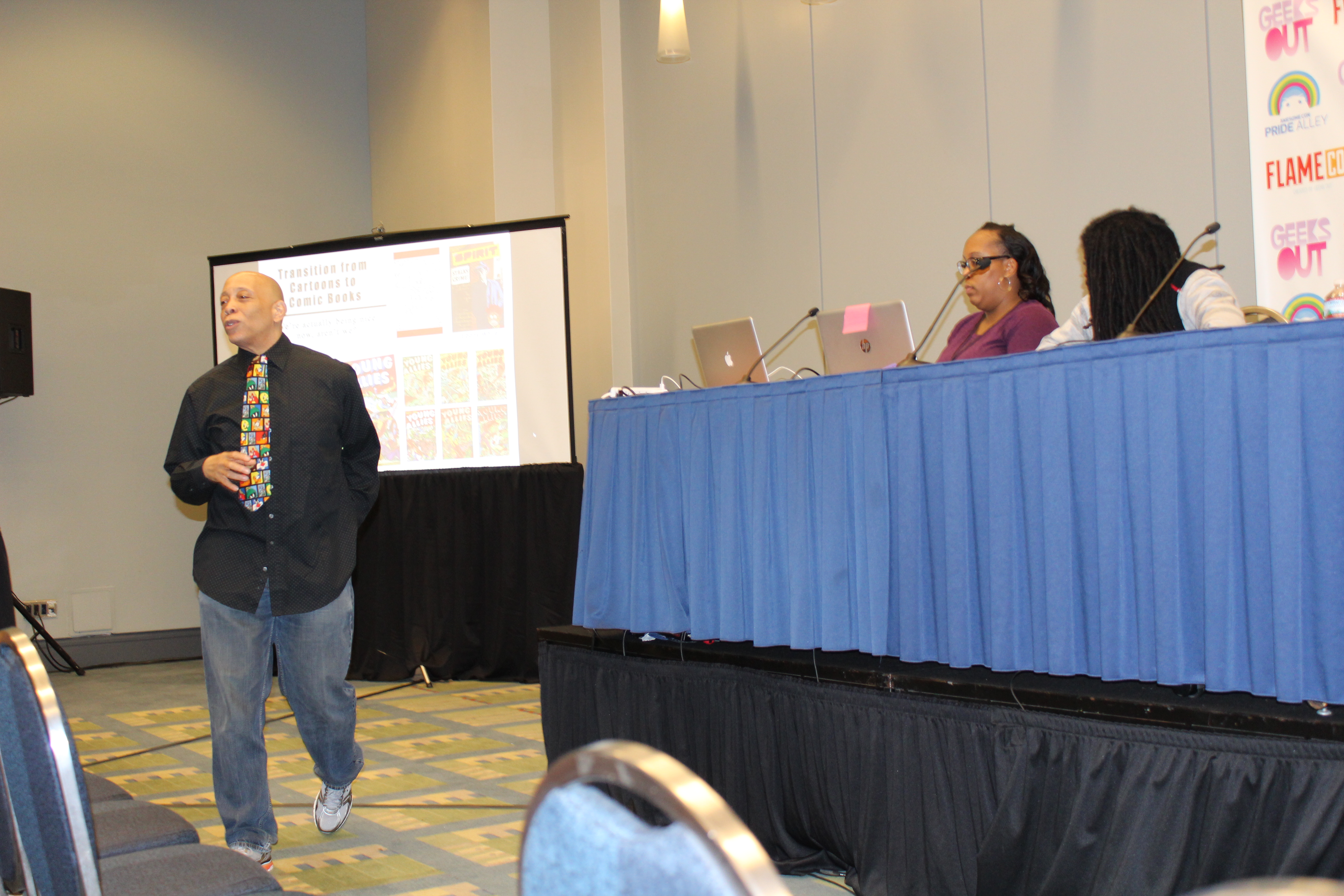 This was not a panel but a lecture by comic book artist Darrell Goza.  I never heard of him nor have ever seen his work, but he’s definitely a historian in comics and knows his stuff about the timeline and lifeline of several comic book characters over the last several decades. Mr. Goza walked throughout the room and engaged more with the audience instead of the customary style of moderating a panel behind a podium.  I commend Goza on keeping the audience interested in his lecture, he asked questions, quizzed us, and kept many attendees laughing throughout his discourse.  However, I was unimpressed and also disturbed that the one Black woman on seated at the panelist table, who works in marketing in the comics industry; was operating a PowerPoint presentation instead of sharing her knowledge as someone who knows things like metrics, analytics, and trends and how marketing works in publishing.  I’m ashamed that I didn’t catch her name since it was mentioned briefly more like an afterthought as opposed to an introduction.  There was another male on the panel who said nothing and I wasn’t sure what his role was exactly; again I didn’t catch his name, and the two were silent during the 45-minute lecture by Goza.

Goza seemed to talk more about himself than anything else, and it would have been more appropriate to have this called Darrell Goza Q&A as opposed to a discussion about Blacks and Women in Comics.  I will add that Goza spent a good five minutes discussing Black women in comics and mentioned pioneers like Jackie Ormes and current Black women creators like Ashley A. Woods, Alitha E. Martinez, Amandla Stenberg and Afua Richardson.  The rest of the 40 minutes was about comic book history and his personal work and relationships in the industry.

Wondering why a panel called Blacks and Women In Comics have a man doing all the talking and the ONE Black woman hasn’t said a word? pic.twitter.com/ry1zzRFArQ

He backpedaled and stated that Black characters should have their own agency and not serve to be supporting story arc to a white character.  His response to me had nothing to do with queer representation nor sexuality of characters in comics.  I’m not sure if he was not articulating himself well or if he misunderstood me, but clearly, this was someone not suited to be a speaker on diversity.  In my opinion, diversity it not just about race or gender.  It’s also about sexuality and people with disabilities.  There was no discussion whatsoever on disabled characters in comics by the way.  And there was no discussion on transgender characters as well.

I don’t expect for all bases to be covered when I am listening to topics about diversity.  Let’s be frank, most of us feel comfortable speaking from our own experience.  I can only speak from the lens of what it is to be a straight, cisgender Black woman.  So if I am invited to a panel, I may not talk about queer representation, transgender representation or other people of color (Latin, Asian, Indigenous, etc. ).  That’s why it’s important to have panels that comprise of the people that represent those groups.  So it is disingenuous to call a panel that speaks about Black women in comics and have no Black women perspectives whatsoever.

AwesomeCon has since reached out to me after seeing my tweet and state they are open to a conversation.  I’ve sent them an email and look forward to their feedback about this panel. 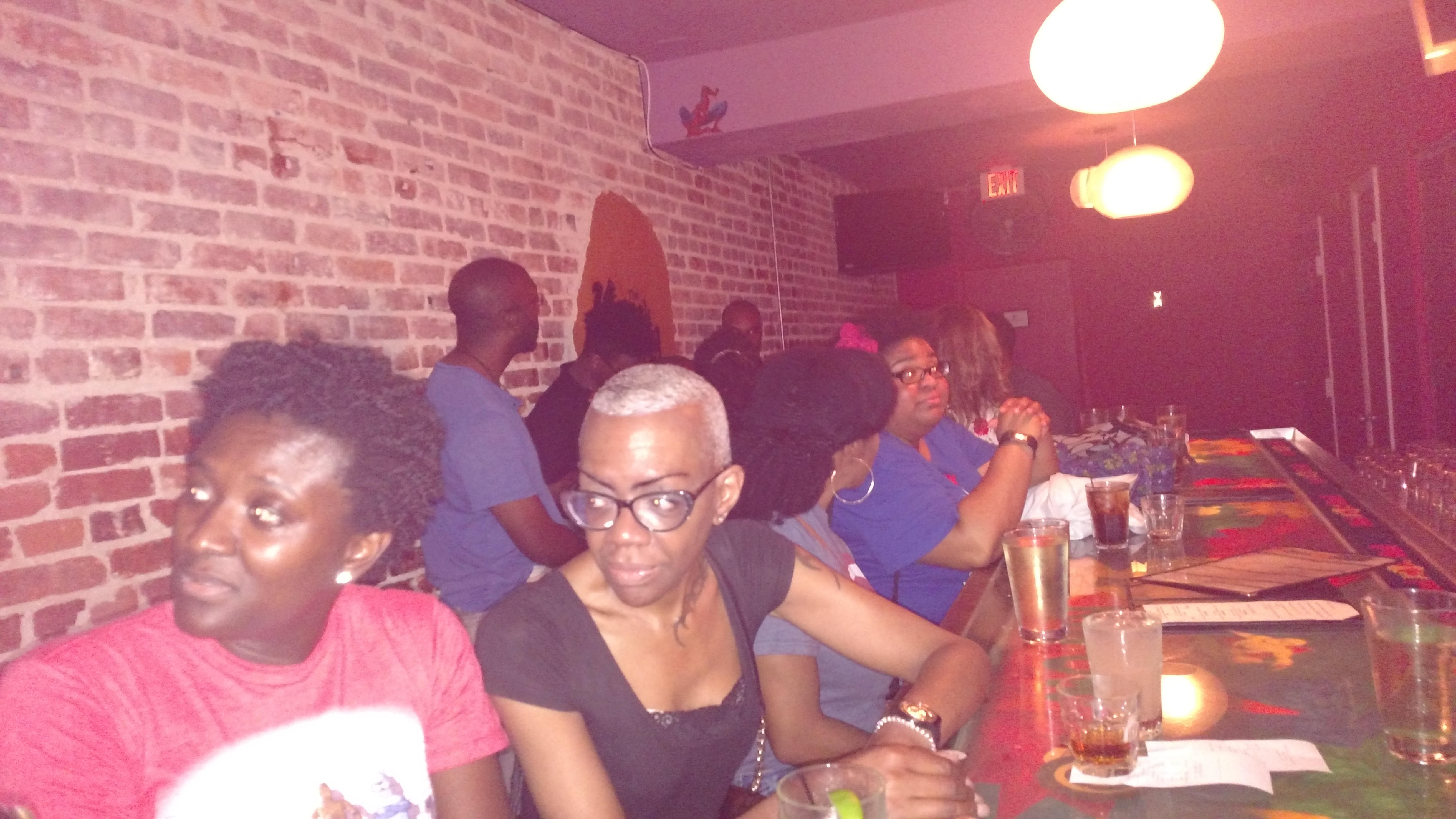 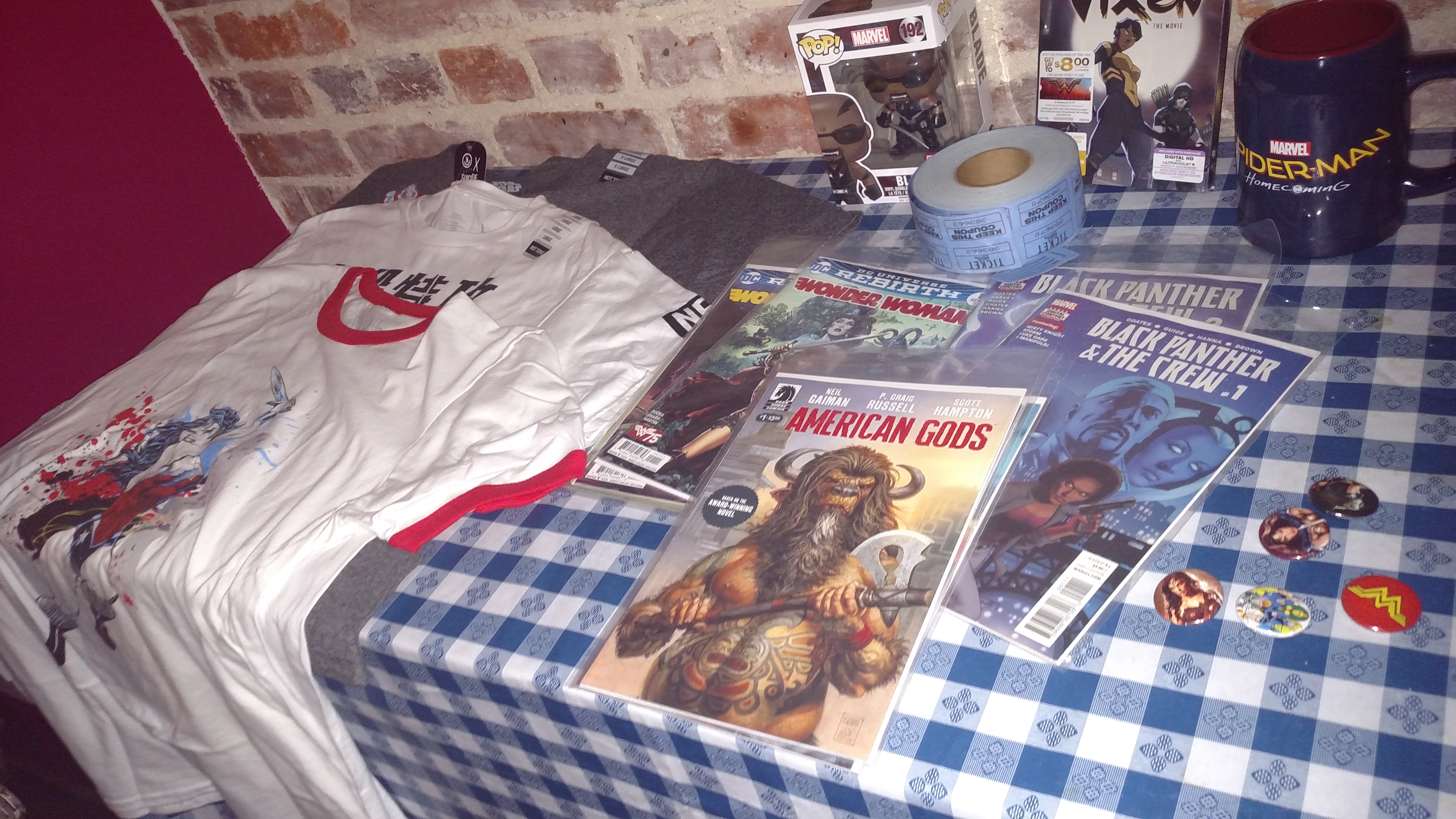 After the panel ended things perked up for me since I was helping to host the Universal Fan Con Meetup over at the Black Squirrel in downtown DC.  We had a great turnout, and I was so excited to meet new fans and old to come and geek out with us for a few hours.  I’m both co-founder and Director of Community Outreach, so it’s important to meet and greet with fellow geeks and nerds in the community and have some face-to-face time and leave the digital corners of the internet.

The hot and humid DC weather was pervasive, but it didn’t stop any of us from having a good time with some adult beverages to cool us down.  There was also a fantastic giveaway hosted by Big Baba Rob and cool items like comic books, coffee mugs, and T-shirts were given away to all who came out to see us!

What I enjoy best about these meetups, is having the same conversations that take place on Twitter about our favorite fandoms and all things in pop culture geek entertainment discussed in person; and sometimes we may not always agree, but at the end, we always have a good time and create some incredible memories!

To close out this roundup, my first experience with AwesomeCon was definitely an exciting and interesting one!  All of this happened within a span of 24 hours so if these adventures are what one can expect from an AwesomeCon experience, then I’m ready for a full schedule for AwesomeCon 2018!  Thanks to the friendly staff and everyone there who helped make my AwesomeCon a pleasant experience.