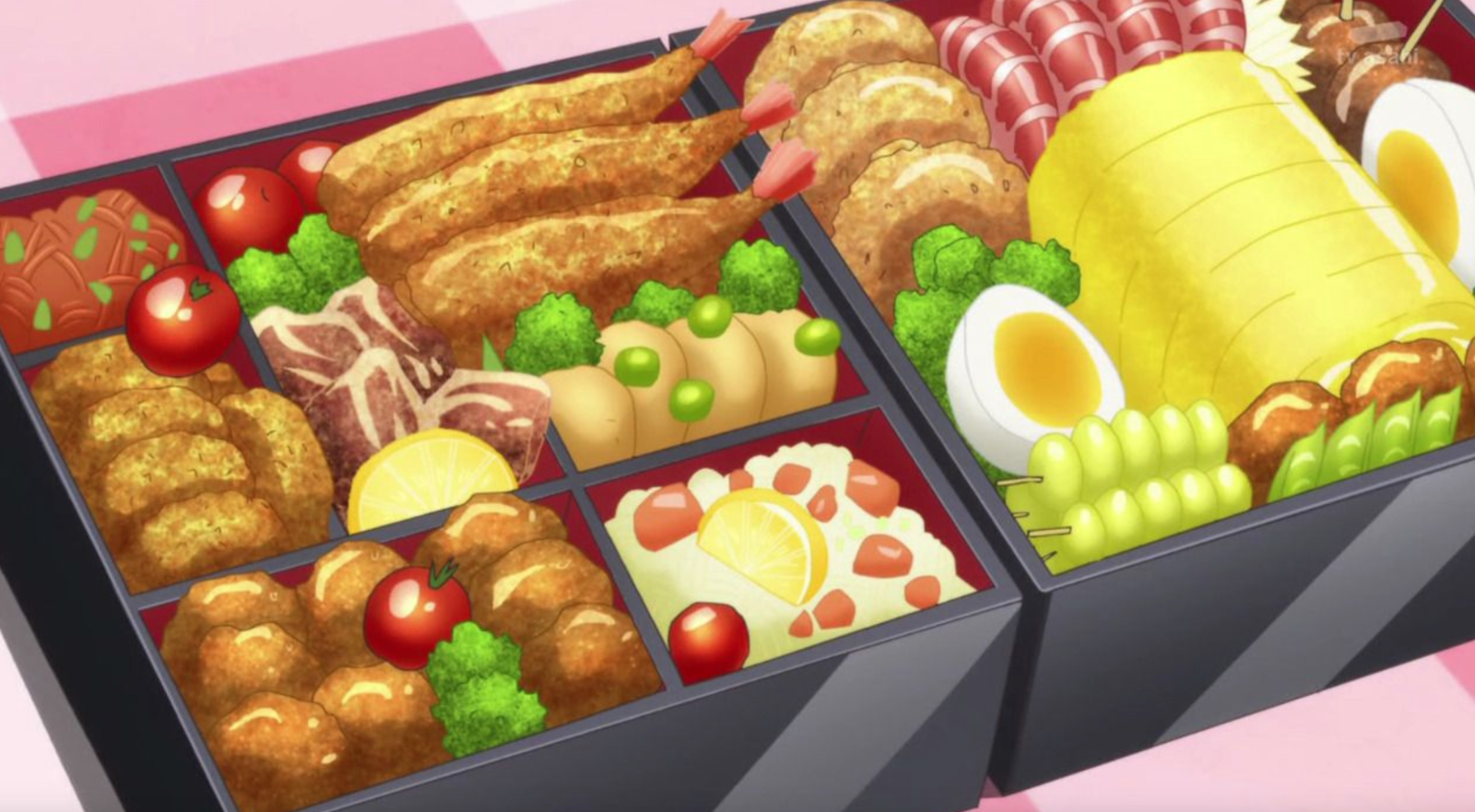 Anime is an art form that comes in a broad spectrum of options, with shows and movies available in all kinds of settings, styles, and genres. However, even with each title varying drastically, there are several fundamental themes that can be found throughout the history of Japanese animation that unite them under one umbrella, giving anime distinct characteristics that help set it apart from other forms of motion picture entertainment. Some of these themes are so common that you have to ask yourself: If what you’re watching doesn’t have these five tropes, can you even call it an anime?

Otakus all over the world, both young and old, can agree: if you’re watching an anime, it will feature scenes of mouth-watering Japanese dishes that’ll have you looking up recipes for curried meals on Pinterest. Whether you’re watching a slice of life, shonen, or seinen, detailed drawings of food can be found throughout the series and are often major components of character personalities. This is especially true in shonen like Dragon Ball Z and Naruto: both of which have main characters who are known for their insatiable appetites. Food is such a major component of anime that it has taken on a life of its own, inspiring restaurant chains IRL and birthing entire shows that focus on the culinary arts.

Anime does a great job of making images of meals like ramen, curries, stews, and bento boxes so realistic you can practically detect the scents of stir-fried meats and veggies wafting from your TV screen. The world-famous Studio Ghibli is an example of an anime studio well known for its visuals of hearty meals, so much so that it inspired an exhibit in their Tokyo-based museum. By incorporating home-cooked meals and five-star dishes into a movie or series, anime studios are paying respect to their Japanese heritage, but they’re also revealing key details about the cast and setting that help make their stories more personal. ITADAKIMASU!

In anime, the idea of “will they or won’t they” is teased between two principle characters through an on-again, off-again flirtationship that usually lasts for several arcs before we get the satisfaction of reaching a climax. If you’re lucky, the writers will appease you with a few intimate embraces that may or may not result in your favorite MC being pummeled to a pulp or being punched so hard that they’re sent flying to another orbit (complete with a twinkle in the sky to top it all off). However, most of the time, viewers will be forced to settle for close encounters with lots of blushing, gasping, and inner monologue until someone finally gets brave enough to relieve themselves of the emotional tension that has been teasing audiences all season long. Shows like Inuyasha, Love Hina, and Sailor Moon are just a few examples of titles with popular love/hate flirtationships. The two characters may bicker like siblings and even try to convince themselves that they can’t stand each other, but don’t let that fool you. All that build-up makes it all the more satisfying when they finally give in to their hidden desires and share the kiss you’ve been begging for all series long.

Everyone who knows anime knows about the hilarious “anime faces.” They’re so animated and distinctive that they’re the first thing that comes to mind when people think of anime. Anime expressions are so popular that they’ve been adopted by American culture, making appearances in shows like Avatar: The Last Airbender and Totally Spies! (which are often confused for Japanese animation.)

Some facial expressions are self-explanatory, like teary eyes symbolizing sadness and blushing showing embarrassment. However, some anime faces aren’t so on the nose and may require you to watch a series or two before you get used to them. If you’re unfamiliar with anime expressions or need clarification on what they mean, allow us to break down some of the most popular ones:

Exaggerated anime expressions are one of the artform’s most common tropes, with countless lists and drawing references being made in their honor online.

Oversharing in anime usually occurs during some kind of showdown, conflict, or horrific situation. Most of the time, a character is explaining themselves or the context of a problem, even though we can clearly see it happening in real-time. Sometimes it helps add clarification to a scene, revealing a character’s feelings and motives. However, most of the time, it’s a character stating the obvious in a way that’s so straightforward it’s almost comical. (Who are we kidding? It’s hilarious!) With that being said, knowing how a character thinks helps bring them to life: those explanations of strategy and thoughts are helpful to character development, giving us an intimate dive into the cast’s personalities, ideas, abilities, and feelings, something that, although obvious to audiences, isn’t obvious to other characters in the scene.

Anime-splaining is a strategy used throughout anime history; it’s a way of adding an extra layer of background (and backstory) to a scene that gives us a glimpse of the inner workings of some of our favorite heroes immerses audiences even deeper into the action. Some of you may think that this isn’t necessary, but it wouldn’t be an anime without anime-splaining.

Just when the plot of your favorite anime series is moving along at a steady pace and you’re sure you’ve reached the peak of an arc, the writers will throw something in the mix to pump your breaks and make you hang on just a little bit longer. Brace yourselves: you’ve arrived at the filler episode.

Filler episodes occur when the writers want to prolong the development of the plot, so they’ll throw in a casual “fun” episode where the character does something off-key to stall the threat of impending doom. Yeah, we know the Earth needs him to train, but Goku still hasn’t gotten his driver’s license, and, according to his wife, that’s more pressing at the moment. Filler reminds us that most of these characters still live ordinary lives, despite being our favorite superpowered heroes. At the end of the day, no matter how strong they are or how cool they seem to us, a lot of our MCs are students, spouses, parents, or children, and that comes with responsibilities. Also, being responsible for saving the world is a lot of work, and sometimes characters just want to have fun no matter how long you’ve been waiting to see them reach a new power level.  Don’t make the mistake of trying to skip past it, either. The writers will likely throw in a gem right at the end, making it impossible for you to miss no matter how much you want to.

These five tropes help set anime apart and add to the appeal of the anime culture.