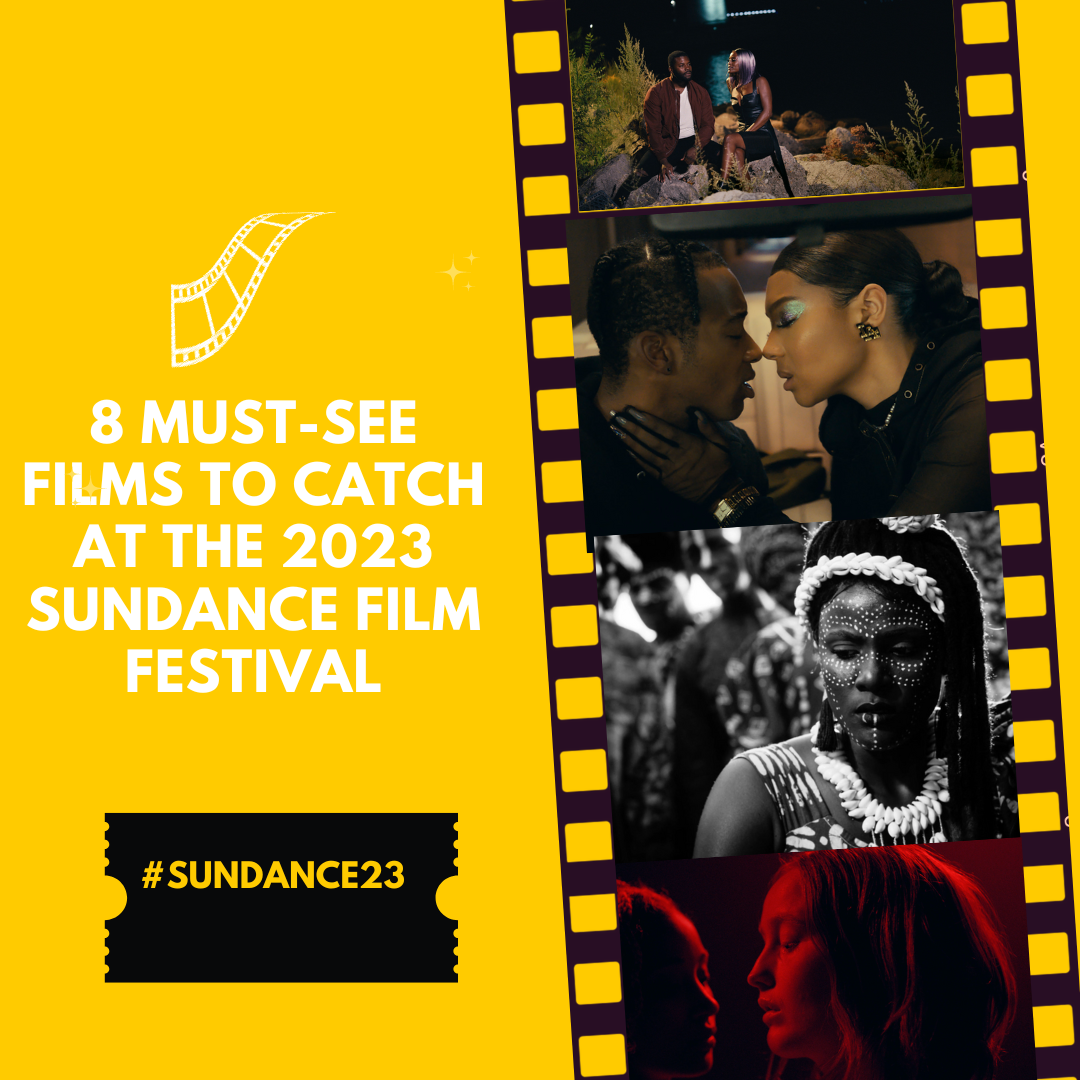 Get your snow boots on and get ready, because this year the 2023 Sundance Film Festival will be back in Park City, Utah.

Due to the pandemic, the last couple of years the festival was shut down and attendees checked out the event virtually. This year, Sundance will be a hybrid festival, meaning both virtual and in-person attendance is welcomed at this year’s event.

The roster of films is exciting, from big name stars to indie hopefuls. We’re looking forward to seeing what the first festival of the year will bring to cinephiles everywhere. I covered a video earlier about the Black films coming to Sundance, and if you’re still interested in seeing that, it’s worth checking out below.

Whether you plan to go to Park City or to attend virtually, keep these 8 films on your shortlist of movies to catch during Sundance. From a lesbian werewolf hockey player to a couple going on Bonnie and Clyde robbing spree — these should definitely be on your radar!

The beauty of Mami Wata is not only its lush cinematography but its bold and elaborate costume design and rich textured makeup. Audiences are hungry for more stories rooted in African mythology and mysticism and Mami Wata does not disappoint. An elder who serves as the intermediary between the townspeople and the water deity Mami Wata is questioned when a sick boy dies in her hands. There are doubts about her abilities, and there is a heated battle between opportunistic militants, who betray the trust of their own community by promising technological progress. The female lead protagonists enrich a powerful story about matriarchal spiritual order. The film feels like fantasy, yet it is very modern and real at the same time. Directed by C.J. “Fiery” Obasi, the film is multi-layered, inspired, and offers an in-depth look into African spirituality and the corruption of Western influence. The film is screened under the World Cinema Dramatic Competition at Sundance.

To Live and Die and Live

Remember how Nicholas Cage drank his sorrows away in the 1995 film Leaving Las Vegas? Tonally that’s what you can expect from Qasim Basir’s latest film To Live and Die and Live. Amin Joseph delivers a powerful performance as Muhammad, a struggling filmmaker battling his addictions to booze and pills as well as picking up the pieces after the death of his stepfather Khalid. While the film is a love letter to Detroit, the movie is truly a character piece about Muhammad and how he navigates and interacts with the people around him. At times, he keeps us a bit on edge as Muhammad’s toxic behavior and choices feels like he’s a walking grenade ready to explode. This film is screened under the Next category at Sundance.

It’s one thing being a teenager. It’s another thing being a queer teenager…in the ’80s. Oh, yeah and to be a werewolf. That’s gotta be tough. Heather (Bobbi Salvör Menuez) has to deal with all of these issues in the film My Animal directed by Jacqueline Castel. When Heather wants to join an all-boys hockey team but can’t because she’s a girl, she feels like the odds are stacked against her when it comes to just about everything that is happening to her. However, that all changes when she meets Jonny (Amandla Stenberg), and the two have a connection that seems impenetrable. The incredible cinematography and nostalgic ’80s horror score gives it a creepy tone that’s perfect for a late night screening. This film is screened under the Midnight category at Sundance.

If you need something upbeat on your list of films to watch, specifically in the rom-com category, then make this your go-to. Rye Lane is a saccharin-filled comedy about two Londoners, Dom (David Jonsson) and Yas (Vivian Oparah), who have some baggage with their exes. Dom’s ex just cheated on him with his best friend, and Yas just recently got out of her own relationship. If you’re into British rom-coms or movies about breakups, this one will melt your heart. Visually the production design is very creative and colorful, which adds to the upbeat tonality of the film. This film is screened under the Premieres category at Sundance.

The documentary category is one of the most exciting categories for me personally because I’m always looking for films that will educate me, and the documentary Kokomo City did not disappoint. Filmmaker D. Smith explores the lives of transgender sex workers in this riveting social commentary doc. This subculture community of marginalized women are finally given a voice through Smith’s storytelling about how they are viewed by the cis gender and Black communities respectively. Filmed in black and white, the cinematography and gorgeous close-up shots tell a story within a story about the lives of women who are often erased and discarded simply for being who they are. The film is screened under the Next category at Sundance.

Director Adura Onashile makes her feature length debut in this poetic coming-of-age story about a mother and daughter each dealing with their own issues of womanhood. Grace (Déborah Lukumuena) is dealing with her past and has insecurities about raising her daughter Ama (Le’Shantey Bonsu). Ama is a prepubescent girl coming to terms with her body, identity, and discovering who she is through a new friendship that may pose a threat to Grace and Ama’s relationship. The universal story about growing pains and navigating through this awkward journey called life is a film that will appeal to just about anyone. The film is screened under the World Cinematic Dramatic Competition at Sundance.

A poignant documentary told in parts of the past and present day, filmmaker Milisuthando Bongela shares intimate details about her personal experiences growing up within the apartheid class structure. Bongela provides a historical account of the Xhosa community Transkei — an unrecognized state in apartheid South Africa. Milisuthando has an incredible amount of archival footage and photographs expanding further on how these communities were impacted. She also dives into how she’s carried some of the systemic racism she endured into her present day relationships with white colleagues, further illustrating the long-lasting effect of white supremacy’s impact on Black people. Add this to your list if you’re into documentaries that educate and inform you. The film is screened under the World Cinematic Documentary Competition at Sundance.

If you’re into Bonnie and Clyde-type of stories, this is a film you do not want to miss. Directed by Thembi L. Banks, the story is about a teen named Brandon (Algee Smith) who just got fired from his job. His life seems to be going into a downward spiral until one fateful day he’s robbed at gunpoint at a convenience store and meets Cassidy (Sierra Capri). The trajectory of his life and his story in this movie changes shortly after meeting her. His single mother raising two younger siblings is played by actor Sanaa Lathan, who also serves as executive producer on the film. If you’re into movies that have unexpected twists and turns then keep this one on your short list. The film is screening under the Next category at Sundance.

The 2023 Festival is January 19–29, 2023, in person in Park City, Salt Lake City, and the Sundance Resort, along with a selection of films available online across the country January 24–29. Happy movie watching!