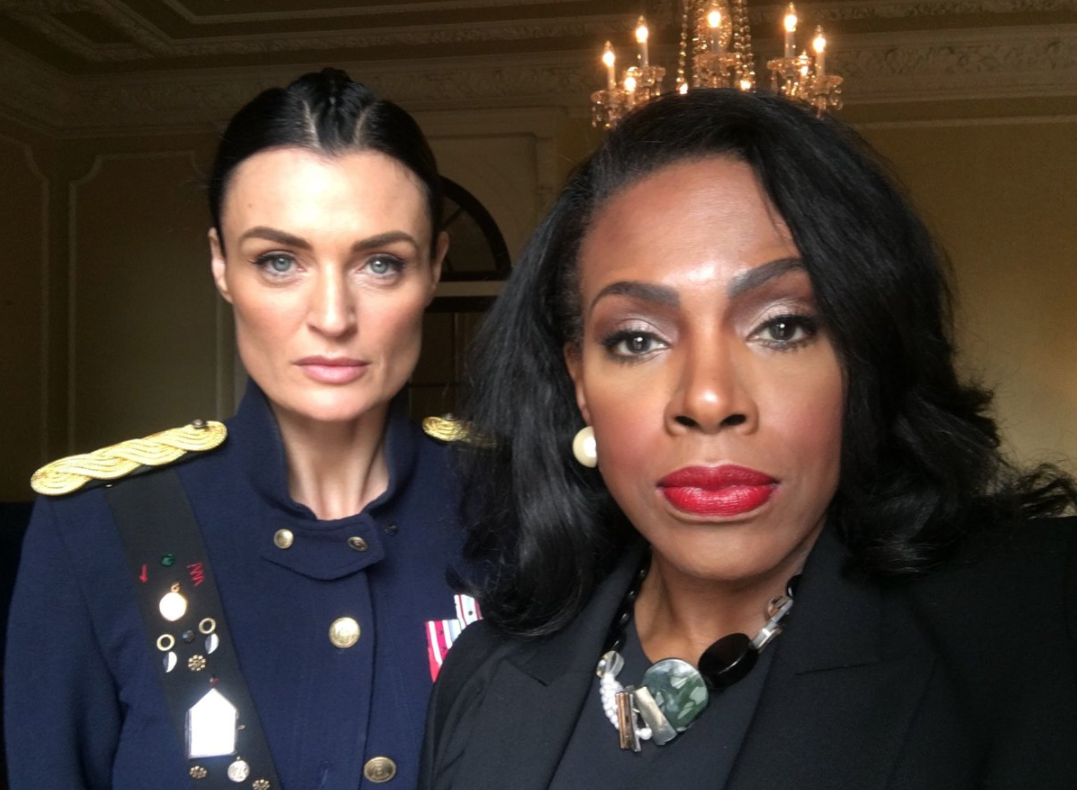 Sheryl Lee Ralph was in the original Broadway cast of Dreamgirls. Her list of over 100 TV credits over 40 years includes roles on Good Times, The Jeffersons, Moesha, HBO’s A Black Lady Sketch Show, and many more. Ralph currently plays President Kelly Wade in the Freeform hit Motherland: Fort Salem. The world of the show is an alternate reality where women hold political power and teenage witches are drafted into the US Army to protect civilians with magic. BGN spoke with Ralph via Zoom about playing the president of the female-dominated United States.

Talk to me about the power struggle between President Wade and General Alder.

The general is a witch who has been alive and in power for hundreds of years. She uses witchcraft to maintain her youth by literally sucking the life out of young women. Adler takes their beauty and uses their lives to maintain her own. At the end of last season, Adler possesses President Wade, controlling what she says so that she [Adler] can hold on to power. Alder is threatened by President Wade’s power, and in our world, our Hague says controlling another human being is one of the worst things you can do to a human being. But for General Alder,  there are no consequences for her. Interesting, huh?

In this next season, we learn that when witchcraft is used to get into other people’s heads, you leave a bit of yourself in that person. Adler has no idea what she’s left behind in President Wade. But I tell you it’s gonna be a very interesting journey for Adler, but then again, in this show, we don’t know who’s who. I mean the first season we thought it was The Spree. In Season 2, we think it’s The Camarilla, but now it’s like, wait a minute. Who’s your friend here? Where should your alliances really be? Who can you trust?  Well, President Wade knows you can’t trust anybody because they can’t hear what she can hear. They don’t know what she knows. So I have a funny feeling more must come.

Motherland: Fort Salem has been wildly popular with young women during the pandemic. Has it felt liberating to play the president at this stage of your career?

It’s just so wonderful to be at a point in my career where I’m not being typecast and to still be here in an industry that has been unrelenting since I was 19 in telling me that there’s no room for me, that there is no place for me. I’m being given the opportunity to play roles that I would not have been considered for because the person had not been born yet who could think in a way that would let a person of color in for that experience.

I’m the person who has been asked, “Why are you going to the Emmys? It’s not like they’re nominating you or anybody else Black. Roots was a long time ago.” And I was like, “Whoa, whoa, whoa, They really said that.” That was during Moesha.

That’s just the tip of the iceberg. But I’m so happy to have been able to hang in there, to be myself the way I look. There are so few now in my age group and generation who are able to reap some of these benefits. I’m so excited to see Angela Bassett as the highest-paid actress of any color on TV. Just thrilled.

As a teenager, I was inspired by your playing Maggie Bryan in the NBC action series Codename Foxfire. How does playing Maggie in 1985 compare to playing President Wade in 2021?

When I think back about doing Codename Foxfire, Maggie Bryan was so against type altogether, it was just so like, Wow, are they going there? Unfortunately, the series didn’t last long. I think it was like eight episodes. I got to go beyond what people would think of me doing.

Then I did a show called The Neighborhood with Howard Rollins Jr. (Ragtime, A Soldiers Story), which was about, what we called at the time, a young “Buppie” [Black yuppie] couple moving into a white neighborhood and everything that they had to fight. The Neighborhood was one of those shows that if they redid it now, they wouldn’t have to change anything, because it’s still happening right now.

I remember being that young Black actress who was absolutely going against type but I’ll never forget, there was a producer doing a spin-off of I think it was Sanford and Son. And that man told me I was not Black enough. I wrote about it in my book Redefining Diva.

Now, who would not want to be me?  Woman of color me, playing the president of the United States in the alternate reality where women run the world?  When you can see someone like Issa Rae go from the Awkward Black Girl on YouTube to a seven-figure deal in Hollywood — when I was younger I wouldn’t have dared think the industry would be evolving like this in my lifetime. I’m so thrilled for every time I opened my mouth for change, I opened my mouth for better, even when people would say, “You’re stupid,” or “You’re a loose cannon,” or “You need to shut up,” or “Nobody really cares about race.” Though it was hard at times to take it, I’m still here.

What right now is bringing you joy?

I choose joy every day. You should follow my Twitter [@thesherylralph]. On my Twitter, I always have to put it out there. Remember diva. Remember, go where you’re celebrated; don’t stay where you are tolerated. Remember diva. I’ve said it before I will say it again, God can do in 60 seconds with you cannot do in a lifetime. Remember diva. Choose joy, choose to be happy, walk in your footsteps, rapid. Open your eyes and look at it, choose joy, because the burden we have been carrying has heavy.