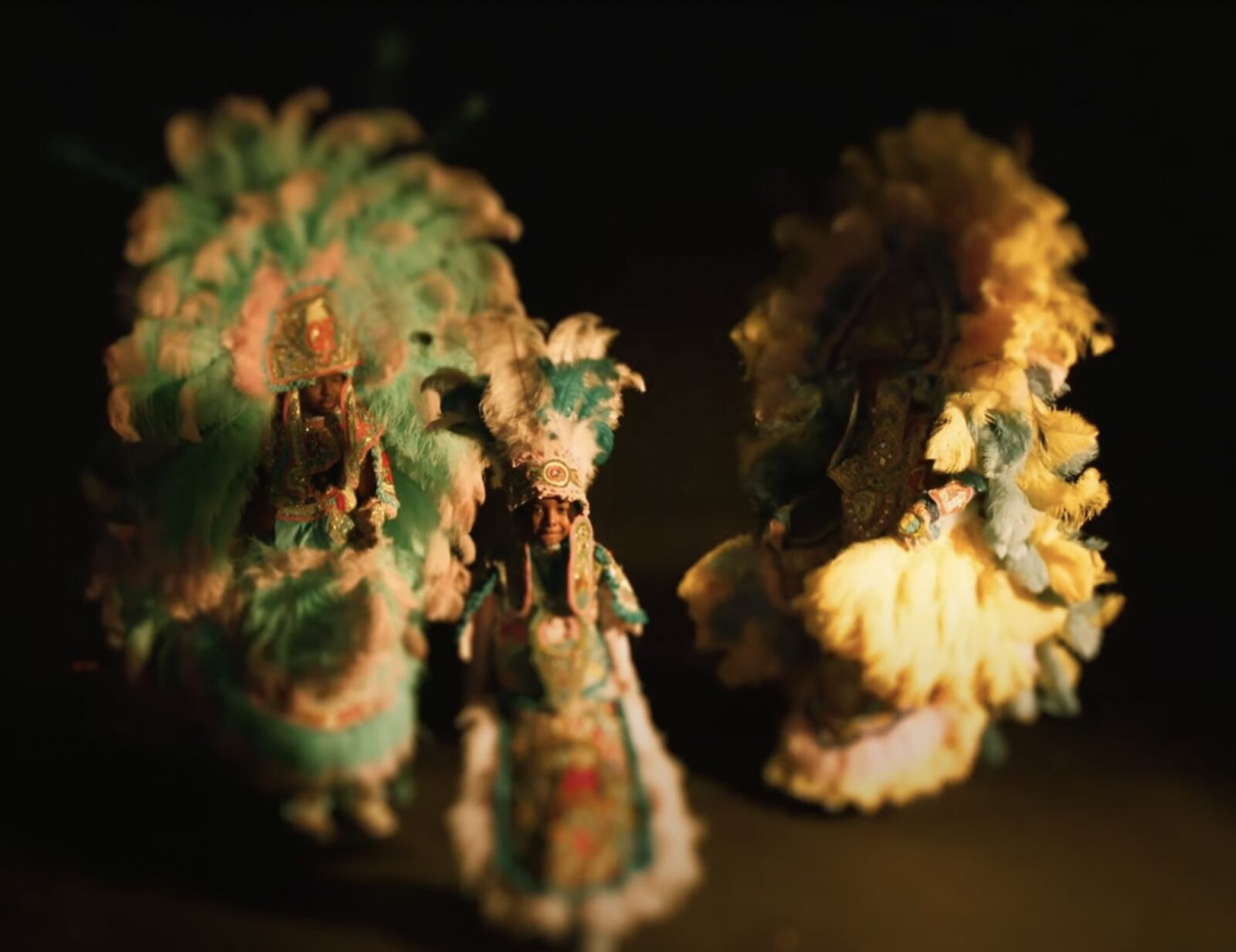 We all have an image in our minds about Mardi Gras — Bourbon Street, excessive drinking, massive crowds, beads. That’s the commercialized Mardi Gras. In Big Chief, Black Hawk, writer-director Jonathan Isaac Jackson (Greenlight) takes us into the world of the Mardi Gras Masking Indian tradition in New Orleans. Many will recognize the colorful outfits, but few already knew their significance (myself included). It’s a mix of African and Native American traditions. Masking is more than a hobby or just a yearly event. For the people who pursue it, it is their lives.

Terrance “Big Chief Tee” Williams Jr. is the leader of the Black Hawk Hunters, a tribe that practices the Mardi Gras Masking Indian tradition. It’s a lot of responsibility for a 16-year-old, but he carries it well. On top of being a chief, he’s also an athlete and member of the school band. He’s truly a remarkable young man and an inspiration for young and old alike.

As the oldest of three boys, Terrance guides his younger brothers, Tyrell “Flagboy Ty” Williams and Simeon “Spyboy Fatman” Israel Jr., as they grow up and participate more each year. This tradition is more about self-expression and honoring their ancestors rather than pure entertainment. The dancing, the music, and the sewing of their own suits is all very personal. There’s a very emotional moment during a performance when Big Chief Tee embraces his mother.

Mardi Gras and Black culture in general face several obstacles to maintain their spaces. The film examines three specific examples — gentrification, COVID-19, and police harassment and brutality. Gentrification happens all over. In New Orleans, wealthy people often buy the beautiful historic homes as a second property rather than an actual place to relocate. In their eyes, it’s like owning a lake house. Except, in cities like New Orleans, what they’re buying is a piece of history.

Big Chief, Black Hawk also talks about cultural appropriation, which is related to gentrification in a sense. In both acts, people can reap the benefits of Black and Indian culture without the investment. In the film, sociologist Dr. Charity Clay says that gentrification “profits on the allure of Black culture while simultaneously removing the people that produce and create the culture.”

When it comes to the pandemic, people have been affected in different ways as well as very similar ways. Music artist and scholar Melissa A. Weber (aka DJ Soul Sister) describes COVID-19 as a “culture killer” for the masking community. The tribes thrive off of gathering and celebrating together as a community. When socializing isn’t acceptable or allowed, they’re left without an integral part of their culture.

Like all over the country, New Orleans has a problem with police officers harassing Black people, often for no real reason. Interviewees of all ages recount terrifying encounters with police that could have ended in their unjust incarceration or death. In one scene, Terrance’s youngest brother Simeon is asked what Black Lives Matter means and how he feels about it. He says, “It makes me feel like they don’t care about us.” He cries after saying this, making it all the more heartbreaking.

Cinematographer Blaze Heru (A Dream for Sale) uses interesting camera techniques. At times, the close-ups feel overdone to the point where it’s hard to see the subjects. Maybe there’s a metaphor there. I liked the intimacy of other shots, like following the back of T as he walks. The angles were always eye-level or slightly below. Framing them this way made their presence powerful, or at the very least, grounded.

There’s a dream-like quality to the archive footage from the 1970s. It has the classic Super 8 style, but something about it is almost otherworldly. Other shots have the tribe dressed in their suits and dancing in an all-black room with colorful lighting. It’s slick like a music video, which is fitting since Jackson is known for his music video work. The grainy archive footage and the high-quality scenes are an interesting contrast.

Big Chief, Black Hawk is a fascinating exploration into a culture many probably aren’t familiar with but that very much deserves the spotlight. We learn about a deeper history of New Orleans and Mardi Gras, beyond the more commercialized depiction. The cinematography is exceptional, with some shots being more on the experimental side. Jonathan Isaac Jackson’s visual love letter to New Orleans is also a celebration of Black culture worldwide.

Big Chief, Black Hawk premiered at the American Black Film Festival November 2021. Stream it for free from November 3–28, 2021, at www.ABFFplay.com.