This entire flagship season of American Gods was chock-full of social commentary thinly masked in the show’s stories about some very colorful characters. The final episode was no exception. There, we find two Queens or powerful old goddesses who managed to survive the wave of public apathy towards gods to remain sated by worship in the present day. Those deals came at a cost, one that is revealed in the season finale. How much of that deal was necessary for survival and how much of it was selling out one’s cause for comfort? And, is there a lesson for today’s women in the details?

I have to say, it was wonderful seeing Mr. Nancy back again, and with another tale. It felt just that he lay out the story of our first Queen, Bilquis and the backstory we have been needing all season. The ancient Queen of Sheba literally devouring the men who thought themselves powerful enough to take her down was empowering. (This, dear Essie, is how you use your feminine wiles!) Mr. Nancy narrated as we watched this powerful ebony and gold goddess evolve.

His story leaves no detail untold. I honestly want to party with Disco Bilquis. That woman was so glamourous, she glowed. She WAS the party. Yet again, men came to take away her crown. She eventually came to the US where black women are not treated as good as she was accustomed. Her dark skin earned Bilquis a place on the street, selling her body to remain in existence. The toll from such an existence showed in her wrinkles and scars. 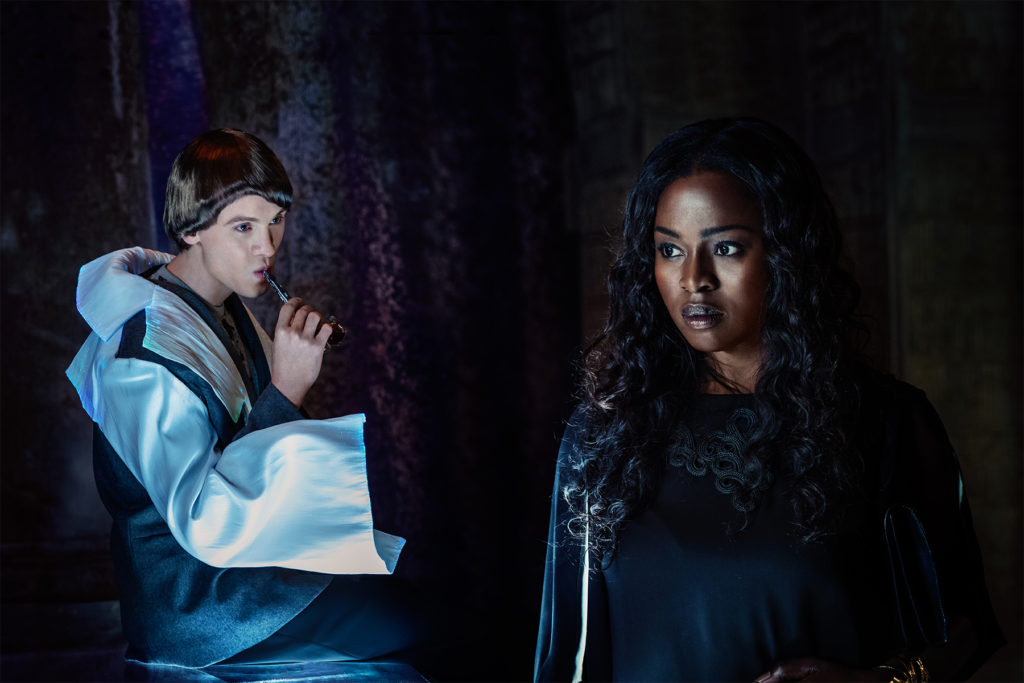 Bilquis was lower than she had ever been when Technology Boy offered the goddess a new start. She would have followers, worshippers, and an endless supply of meat for sexual satisfaction. All she had to do was join the new gods.

Now, all throughout the season, in practically every episode, Wednesday talked about how the gods, if they are no longer relevant, they die. Bilquis was on her way out when a chance to survive was offered. I have to say that my heart fell when she took the deal, and I knew that little twerp Tech Boy would come back with something more sinister next time. I sat in my room trying to shout her down from the offer. In the end, however, a girl gotta eat and Bilquis was languishing from hunger.

We don’t see Easter’s deal being made, but we do hear all about it. Her fake friendship with Media wreaks of a deal that nobody really won at. Easter would go along because the deal was lucrative. Without it, she would be as washed up as Bilquis was before her offer can in. The new Easter was very popular, especially with all the Christians in her garden playing with the pagan trappings of the religion. Too bad it was all a façade.

Both goddesses are glamourous, both beautiful and both prospering under their deals with the new gods, or so it seems.

The hookups and followers that Bilquis draws from the app and the yearly sideshow that Easter plays to Christianity (and all of those Jesuses) are not hitting the spot.

When Wednesday gives Easter space and encouragement to show what she is truly made of, the woman’s face is pure ecstasy. Her hair falls free from is perfect, uptight coil, as she draws the life out of the land, using her full power for probably the first time in eons. It is a power that blows away Media and her minions. Even Shadow is speechless. When she is done, Easter looks truly happy.

The deals these women made ensured that they survived where other gods have withered away to dust. The deals were offered when the women needed them most, ensuring that they would agree without considering the consequences. These are the sacrifices that had to be made for survival.

Sacrifice is no surprise to women across America. We sacrifice daily for our families, our work, and some for our faith. These sacrifices chip away at who we are until the pieces of our real selves are gone. Think back to those movies where the wife leaves her family after decades of care and says that she “lost herself” in them. Well, she sacrificed so much for that family until she has nothing left. She has become so unhappy, so depressed, so unable to go on with her life because there is nothing to move on to, but laundry. These women get into these positions through deals called motherhood and marriage.

I don’t see the deals the Easter and Bilquis made as selling out. Sell outs get something for their trouble. They usually do so for their own comfort. These women are not comfortable. They are still craving the old way every day. The current situation is thus not selling out, but survival plain and simple.

There is a message in their stories so far. Maybe that we shouldn’t lose so much of ourselves in the deals we make to marry or build families or to even build careers. Maybe we should be wary of the compromises we make with white guy politicians obsessed with our ovaries. Whatever the moral, this one is yours to find. I am just waiting to see how Easter and Bilquis fare in the next season.

Will they break with the old gods to join the new?

Or will they remain pawns for Mr. World’s disposal?