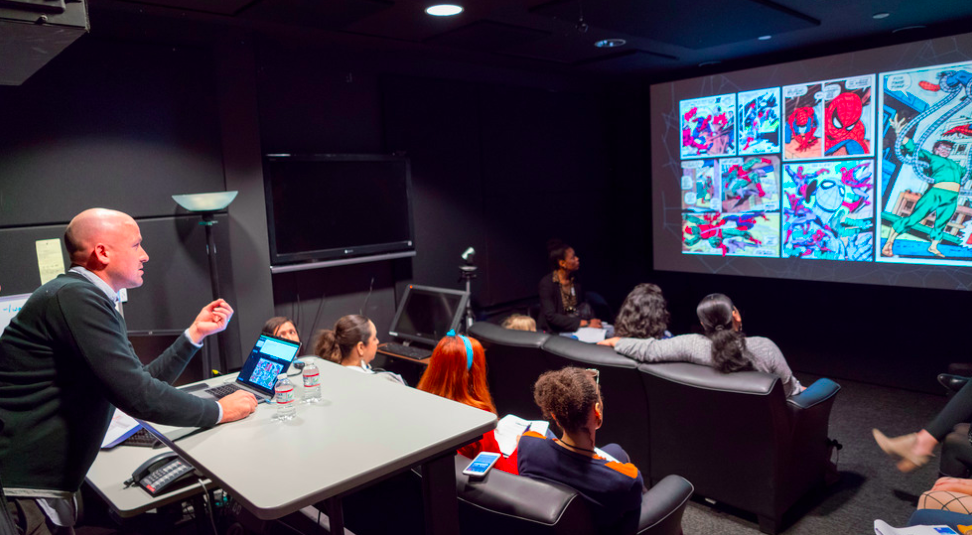 Spider-Man: Into the Spider-Verse is now an Academy Award winner! The feature is now available on Digital and on 4K Ultra HD Combo Pack, Blu-ray Combo Pack and will be available on DVD on March 19th.

In one of the Bonus Materials included in the digital release, Phil Lord, writer, and producer shares that “it’s a powerful idea that in order to be a hero you can still bring your spin to it, your personality, that uniqueness is what makes you great.” This rings so true in regards to Miles Morales and the other Spider-Men that we fell in love with! 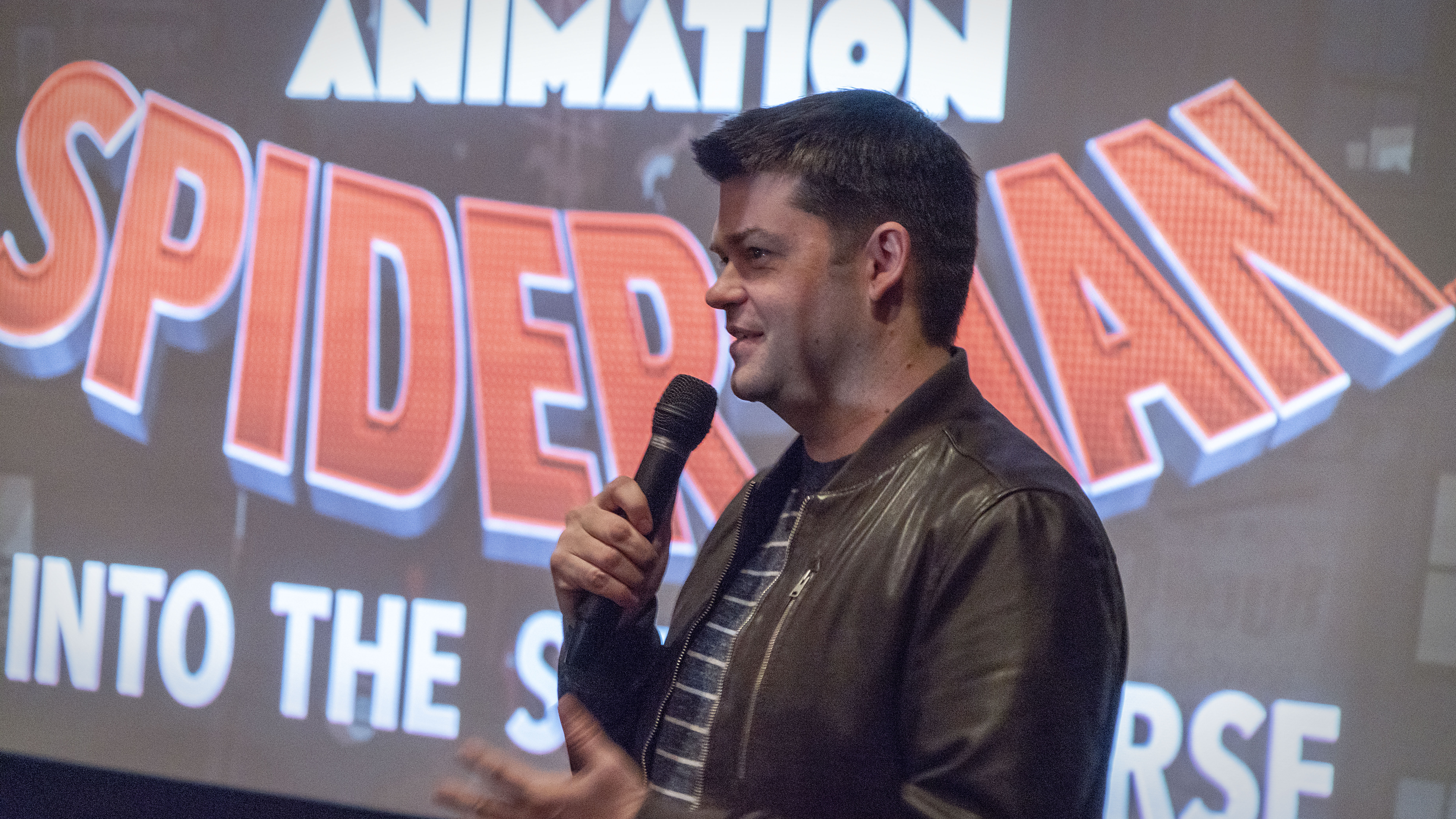 Phil Lord and Chris Miller (producer) kept that same energy when encouraging the Spider-Man: Into the Spider-Verse team to push the medium of animation to a place it has never gone before. I had the ultimate Spider-Man: Into the Spider-Verse experience when I got the opportunity to go to Sony Pictures Animation and get an accelerated master class for the making of the film from Story Artist – Denise Koyama, VFX Supervisor – Danny Dimian, and Head of Character Animation – Joshua Beveridge.

She shared with us that the storyboard artist is the first part of how a film gets made. Essentially, they are visualizing the written script for the director. Through their work, they are giving ideas to the director on how a sequence should run, the locations, and the characters acting. 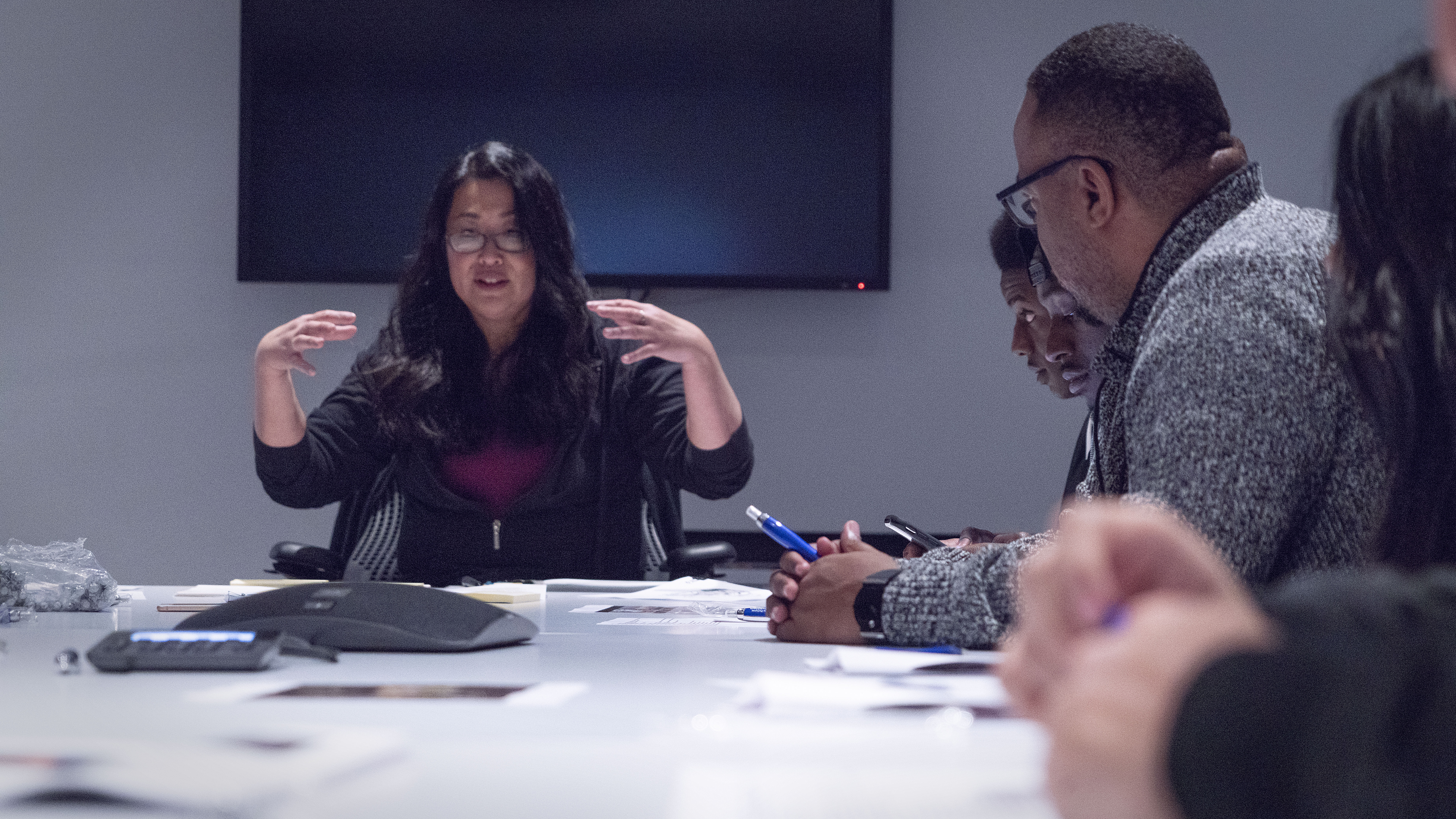 The storyboard process goes as follows; project preparation, sequence launch, preparation for the sequence, draw it, pitch it to directors, and If it gets approved to send it over to editorials. Denise explained to us how much fun the preparation was with reading comics, watching films, etc. Her most challenging part of the process with any project is reading the script (she shared that as an artist she doesn’t actually read a lot), but Spider-Man: Into the Spider-Verse was such a great script because she was able to visualize every scene as she read.

She shared the art of studying characters, particularly Miles. Not just how to draw characters, but understanding their personalities. For example, if you look at even a still image of Miles he is flowing, always in motion, even when he is standing still.

After reading the script and researching, the director chooses an artist to create a sequence launch. The artist is given about 3 pages of a script or sometimes just an outline. Considering a 120 plus page script, the task of storyboarding can seem overwhelming, but a Denise shared with us that she always starts with stick figures and post it notes. Spider-Man: Into the Spider-Verse started with the process of visualizing a script with stick figures and post it, and then the final product became a fresh and rich academy award winning animation.

Danny shared with us that in his 25 years of his professional career, he has never had the freedom to do, what he had on Spider-Man: Into the Spider-Verse. Early on in their process, the team decided that they wanted to maintain the spirit of the comic books. That meant three things when designing. Spider-Man: Into the Spider-Verse needed to be their version of a printed comic book that could be moving, show the hand of the artist, and above all else, art over accuracy. 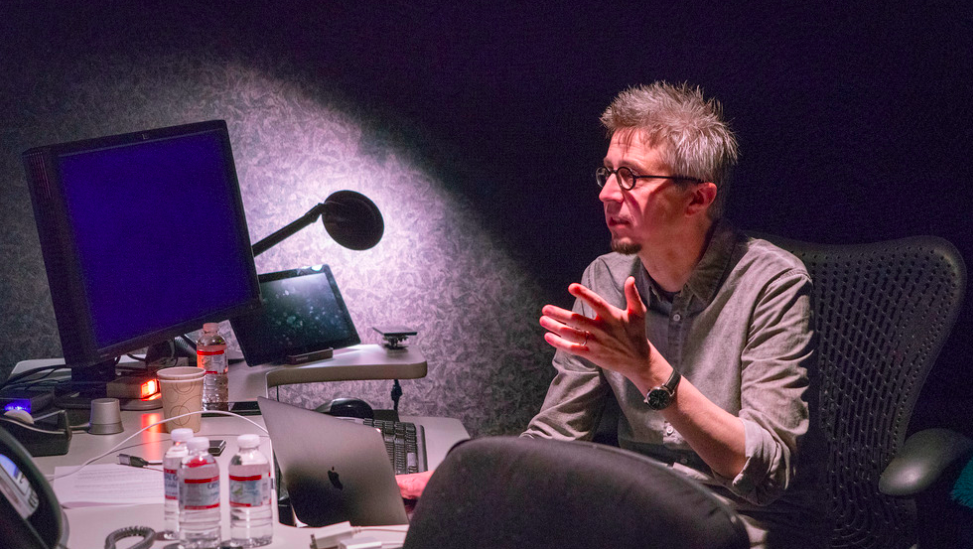 The aesthetics began to cultivate with the art department painting illustrations. Then the team was able to lock in a look and really hone in on the art over the realism. By choosing this path, the team was able to draw things for ultimate feeling, that may not at all be real. For example, in the scene when Miles as Spider-Man leaps off the building, New York City is framed around him for the ultimate impact of emotions. Design choices like these mixed in with the lights and shadows are what make the film more artistic rather than literal.

Danny shared that with the freedom to create and ability to “just go for it” the team still needed to create some rules so that everything felt consistent. One of the rules they established, which was also homage to the comic book was the importance and level of detail of the line work. The rule that I found to be the most intriguing was the teams choice to avoid things that are soft and smooth. For me, this is what most makes the film feel more like a moving comic than anything else. Most films use the lens to blur things out and focus on characters or objects to tell you where to look, but in Spider-Man: Into the Spider-Verse they tried not to use the blur images. Instead, the RGB colors are actually misprinted and not aligned properly. This creates a smear rather than a blur effect. You will especially notice these smears if you freeze the film on any of the fast camera movement scenes.

Joshua shared that one of the main reasons the team took these distinct risks was because they were trying to create a new look. They didn’t want to call it a cartoon and they were not recreating reality, so they created a world which lived in-between the two. The team picked and chose their favorite things from both of those worlds. Then, they deconstructed the images from the art departments paintings and went to work! 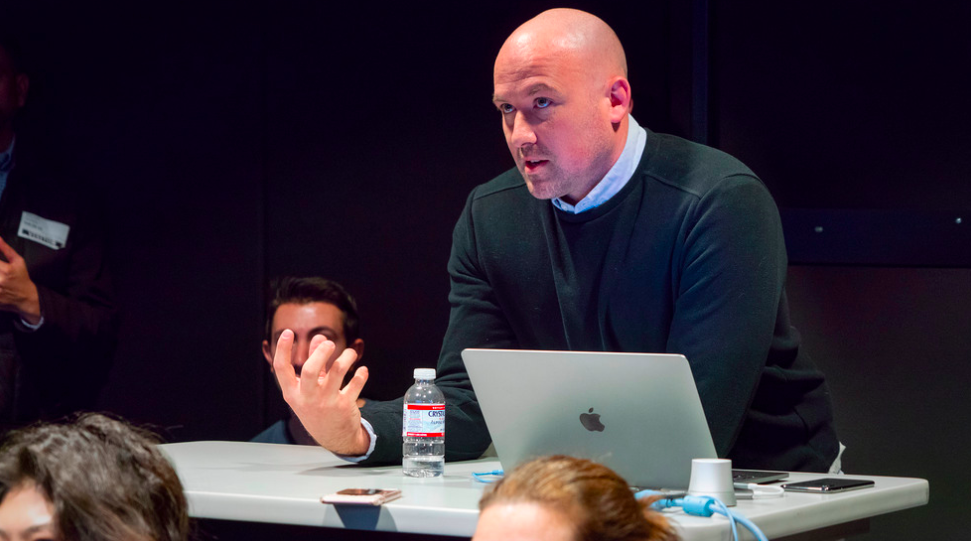 Joshua also went into great detail about what makes Miles feel so fresh and new. The character animation department did a great job of not creating nostalgia within the character. Miles is a hero that shows skepticism. Once he is established as an artist and he begins to question his world it comes from a more thoughtful place. He is established as more of an introvert, a lot of his real problem solving happens in his own internal space. This is what exaggerates the difference between Miles and Peter in a sincere and honest way. However, what makes them both Spider-man is their low center of gravity, having the arch in their spine, and stretched out limbs.

Spider-Man: Into the Spider-Verse created a new look and there are a plethora of things that make this animated universe stand out, from the line work to the smears, etc. However, I believe what ultimately makes this film’s animation stand out is the freedom that the artist was able to take. They were able to create a visual language that put the hand of the artist at the forefront and allowed for the color, action, and emotion of the film to shine through! 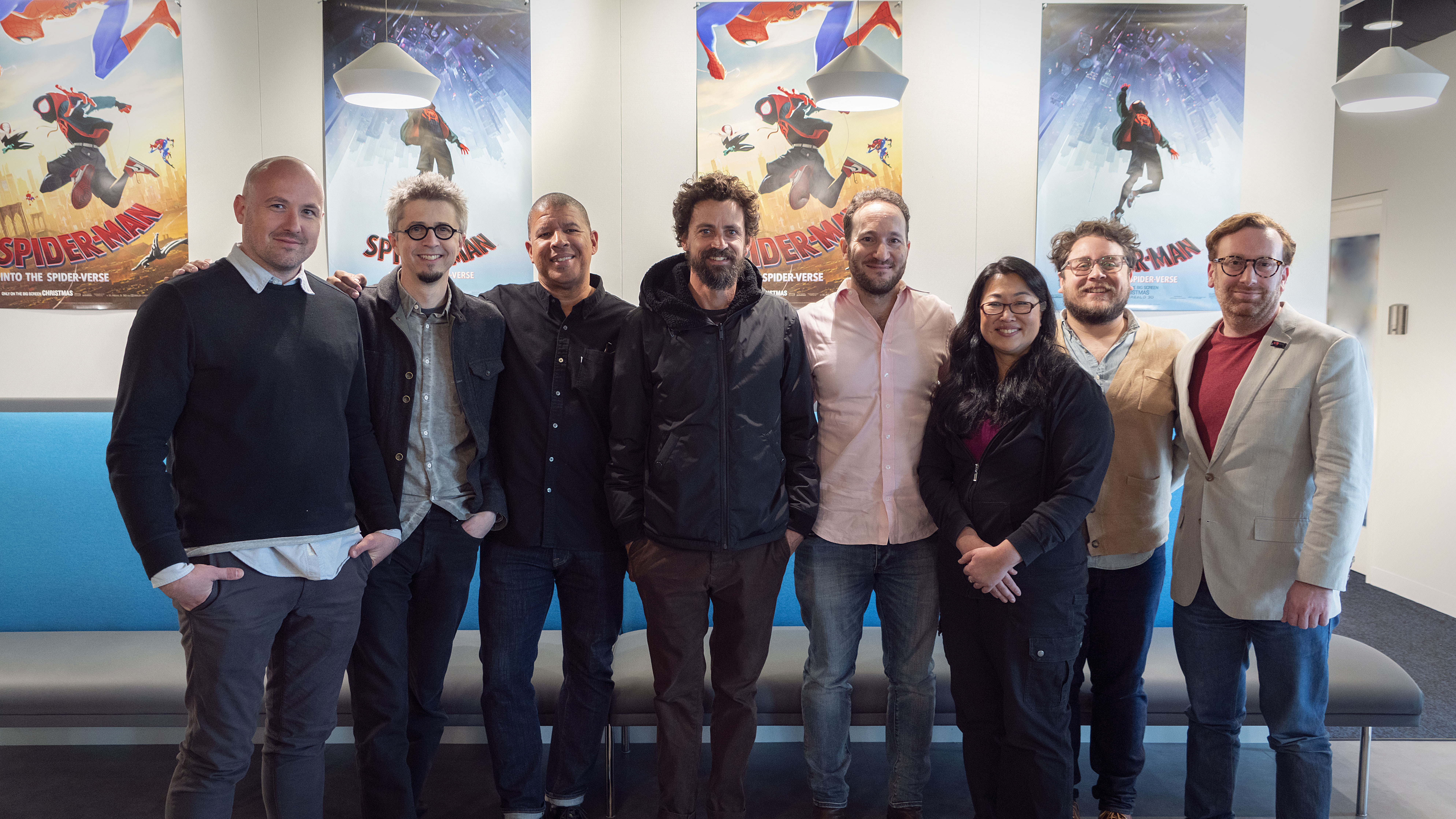