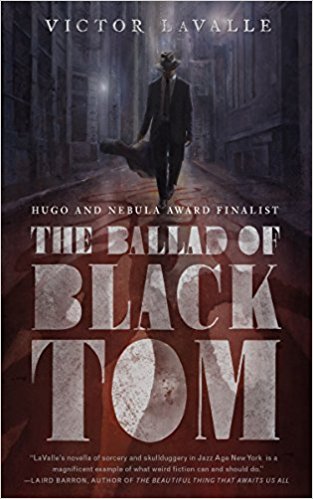 Almost ten years ago, I had read Big Machine by Victor LaValle. I found it okay. Because of this lack of enthusiasm, I didn’t really follow what LaValle did after that. But one person told me I had to read The Ballad of Black Tom. Then another. Then another…

Guess what? They all were right. I had to read it, and so do you.

Charles Thomas Tester is a Black man who lives in Harlem in the 1920s with his father. Tommy is a bit of a con, always just a shade on the bad side of a dodgy deal–like getting an occult book for a sorceress but stealing the last page so it would be useless. One day, while he is in a white area of New York, an old white man hires him to play the guitar at a party.

By many aspects, The Ballad of Black Tom is raw with emotions: grief, anger, and fear. An event that occurs at the end of the first half of the novella is described with such strength that you are completely lost in the turmoil of emotions from the character and your own.

Charles Thomas Tester, the main character, is fascinating. His development throughout the novella is cohesive and striking, and LaValle’s powerful writing makes you care and gasp and, yes, understand too. Racism and police brutality are also strikingly told, more so because we share Tommy’s thoughts who has to bend the knee, avert his eyes, and stay silent. The casual racist remarks or the hate crimes committed by white characters are shocking and slowly build towards the second part of the novella. But even though the story is set in the 1920s, it’s easy to draw parallels to what we hear is happening currently in America.

The Ballad of Black Tom is not only another example of how much the quality of novellas has improved lately, but it is also an essential contemporary fantasy/horror read. Victor LaValle wrote a Lovecraftian story that will certainly please any fan of this genre while turning its most unpalatable aspects on its head. The Ballad of Black Tom is a tale of cosmic and moral choices. The metaphysical anguish born from the insignificance of humans within the cosmos that is often typical of a Lovecratian story cedes its place to anger towards the actions of men and women in this world. The hopelessness, a recurring theme in Lovecraft’s stories, is a hopelessness born out of race and class: the story takes Lovecraft’s racism and indifference to make it the drive and cause of his plot.

The Ballad of Black Tom is a novella that will take its readers on a rollercoaster of emotions with a gripping pace, a main character that will haunt you for a long time, and a remarkable style. It is, without a shadow of a doubt, a novella that you must read, even if it doesn’t sound like your cup of tea.

As I was told, I’m now telling it to you: you have to read it. So read it… really.