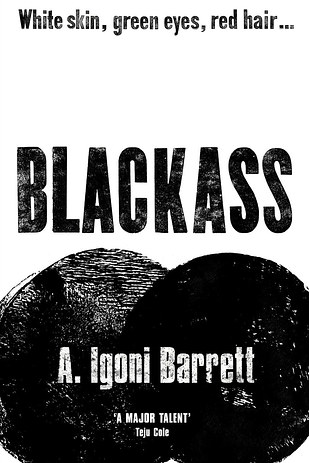 Sometimes, you speak of novels blurring the genres when sci-fi or fantasy is in the background. Blackass definitely blurs them–very much. The fantasy element is mainly the starting point to the story and doesn’t come back much. But as the novel has been shortlisted for a Nommo Award, it felt only right that having liked it, I’d review it too.

Furo is a thirty something Nigerian man who lives in Lagos with his parents. When he wakes up one morning to head to a job interview, he realises he has become a white man. From then on, his life will dramatically change.

When Blackass begins, you pretty much expect a satire–and a satire it is in the beginning. The feeling of otherness, the stares Furo draws, will most certainly remind people what it is to look “other” in any country. But the satire is also directly pointed at Nigerian society where white men have everything falling into their lap simply by virtue of being white.

But this is also where the novel diverts from being a simple satire to also being an interesting character study. Furo remains himself: a not very qualified, not very ambitious and pretty much egotistical young man. But his new skin colour gives him, as the novel progresses, a sense of entitlement. Without being preachy, the novel dives behind the appearances that fool most of us to show us who the man is–whichever his skin colour.

To this, Barrett adds a meta twist to it. As Furo gets into a café, he meets a writer (Igoni) who soon finds himself intrigued by him. And as the satire diverted into a character study, so did the meta twist, both joining the theme about appearances and how much importance we attach to skin colour or gender. Sadly, that last aspect is much less developed, but I suppose that considering Nigerian culture and laws, what the novel tries is already pretty daring.

As the novel opens with a sentence from Kafka’s Metamorphosis, you expect Furo to turn into another Samsa, with a fate very much the same. But Blackass is much more cynical than that. Or is it?

Actually, it is one of my rare regrets with this novel: the ending feels a bit rushed, both because I felt that Barrett didn’t fully exploit his Igoni character and because the ending remains open.

Blackass is a story of identity, self-discovery (even if who you find yourself to be at the end is an arse), and also a good satire. It has many funny moments, and the style is confident, even when the story veers into meta. It won’t be a story for anyone looking for an unabashed fantasy story, but it’ll certainly please anyone who likes The Metamorphosis, If by a winter night a traveller… or The Interpreters. It was for me a very interesting read, one of those stories set specifically in a time and place but one that also manages to be universal.

Blackass, written by Igoni Barrett, has been shortlisted for the 2017 Nommo Awards.