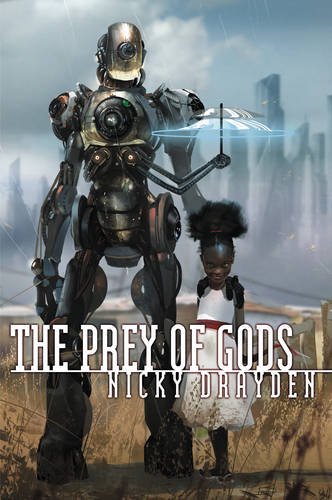 You don’t judge a book by its cover. Except, in reality, you often pick a book by its cover. The Prey of Gods‘ cover was what instantly drew me: it’s beautiful and invites curiosity about the story. The novel wasn’t such an instant hit with me, but it’s a great blend of sci-fi and fantasy in a story packed with action.

The Prey of Gods follows five main characters in their lives in South Africa: Muzi, a mixed race teenage boy who is attracted to his best friend Elkin and who tries to lives up to his grandfather’s expectations; Nomvula, a little girl living in a township and whose mother is depressive; Sidney, who works in a beauty salon but who is a demi-goddess and has the power to manipulate things and minds; Wallace Stoker, a politician who also leads a double life as Felicity Lyons, an aspiring singer; and Riya Natrajan, a famous singer who secretly suffers from multiple sclerosis.

One of the most striking elements in The Prey of Gods is how well Nicky Drayden blends sci-fi and fantasy. We are in a near future where our computers are bots faithfully following us everywhere on their eight legs, and some laboratories can manipulate DNA and create viruses or chimeras. But we are also in a world where ancient powers still linger: demi-gods or goddesses are still around and can still get some power out of belief or fear. In a sense, The Prey of Gods has learned from American Gods, but in setting it in the near future, Drayden can add a sci-fi touch that is completely part of the story and that never feels stuck on it like an old bit of sellotape.

The novel is action packed. It is often gripping, and the rhythm is sustained throughout its 300+ pages. It’s not repetitive and goes from a very well done katàbasis to an epic fight with a mecha versus a semi-goddess, to say nothing of rampage scenes in the streets of Pretoria.

But I somehow felt that Drayden barely brushed on some aspects that the novel really had the potential for: Nomvula comes from a township (and it seems in the future, the situation for townships inhabitants isn’t much better), the AIs are enslaved to humans, and we are in South Africa. Yet somehow, class and race issues that could be wonderfully explored in such a context are barely touched upon. It was a bit frustrating because it felt, in the end, like a blockbuster novel to me: lots of action, hints here and there at some deeper issues, but let’s not put them in the way of a good fight scene (but the fight scenes are good indeed!).

Nonetheless, even if it was frustrating, it didn’t deter much of my enjoyment of the story. Every character brings a different voice to their stories of self discovery and empowerment, whether it is to understand what it is to be a man, or to be the woman you’ve always been even if you were born a man, or to accept pain as a part of you when you suffer from a grave illness.

The gods and goddesses are a bit more one dimensional, but they fully incarnate hubris or morality.

The Prey of Gods was a very entertaining novel filled with wonderfully imaginative ideas, and it was very competently written. I may regret it didn’t delve deeper in some political or social aspects, but I really enjoyed reading it, and I would definitely recommend it to whoever is looking for a diverse novel full of action and inventive creations.