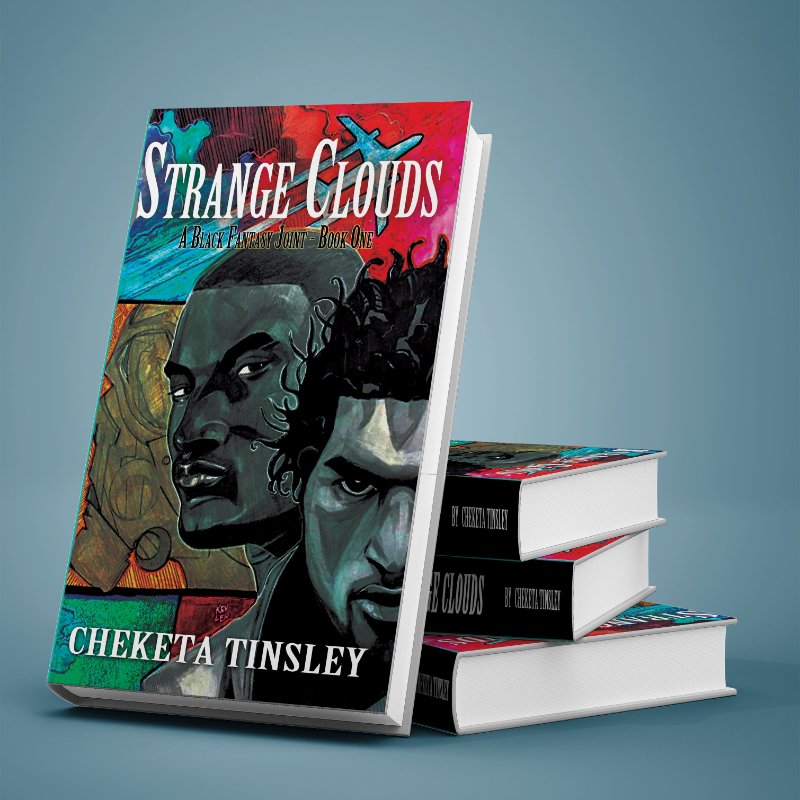 “In the beginning, I was afraid to share my characters real and sometimes abrasive dialogues and complexities to the world.”

One of the first statements from the author, Cheketa Tinsley, helps set the stage for what became to me as a reader, a new kind of fiction. Strange Clouds describes itself as a “melanated fantasy joint,” a novel with at-risk character protagonists in a fantasy novel. As a reader of color, I must preface this review with how powerful and important it is to tell the stories of those that, in fiction and reality, are brushed to the side and forgotten especially in a genre with little to no representation. And as the novel progresses, it’s so easy to see why the natural voices of the main characters are indeed relevant and engaging.

Brief rundown: Raysean and Keenan are cousins who have stayed silent about their powerful capacities the greater part of their lives. At the point when another schoolmate is abruptly abducted, the cousins are rapidly tossed into a waiting diversion that exposes others with comparative capacities, alongside “suit-wearing creatures” attempting to saddle similar forces.

It’s not a long read, which implies Strange Clouds hops very quickly into action. As Raysean and Keenan push into the world they don’t comprehend; the reader is in the interest of personal entertainment. They’re straight-up and matter-of-certainty, which is a much-needed refresher. Nothing sounds good to them, they know it, and they’re not hesitant to state it. The novel takes the possibility of merely tolerating an unexpected and nonsensical situation basic to dream and flips it on its head with a healthy dose of reality: how would you respond when life as you as you know it isn’t what it appears?

But while they’re figuring it out, they’re not playing around. As the protagonists begin to unravel just how deep the pockets of the enemy goes, it sets the stage for a great and exciting showdown that reflects real issues (environmental and social injustice) and the mistrust that many holds for certain elite groups and figures today. This story is very much a reminder that Raysean and Keenan are not your typical fantasy heroes, and they’re up against a society that knows that as well. While we don’t see how this will play out in full just yet, the first novel sets the stage for some very promising face-offs and power struggle sequels in the future.

(Also, I started getting an X-Men meets Gatekeeper Series vibe which also sucked me in. Did anyone else happen to read that very obscure series? No? Well, moving on then).

I will concede being new to the melanated fantasy drama; it took me a couple of sections to get familiar with as a reader of more traditional fantasy.  The style of writing and descriptions sometimes felt out of place, and that might be because individuals and spots depict how I would portray them, but rather how the characters would, which can feel unnatural if it’s not something you’re expected to read. However, there was additionally a grounded feeling of reality to it all that anybody can appreciate, which makes for some diverting scenes, particularly between the cousins, who have a superbly composed and paced dynamic.

Obviously, when you get a shorter first book that is commencing an arrangement’s will undoubtedly be points of interest and minutes where you simply need to know more. The trigger of the novel’s story is the capturing of another cohort, Lotus. She gets her particular section however she’s soon gone aside from about different characters. We learn about why she’s so essential to Raysean and Keenan; it’s difficult to feel connected to her by novel’s end. In all truly, there were minutes where I overlooked the poor young lady. Luckily, our characters did not.

Likewise, there are connections between characters like Qaasim and Saada (who serves as the primary rival in this novel, yet the end presents others) that uncovers (that I won’t post here because of spoilers) that appear to fall into your lap. As of right now, it’s difficult to realize what the part is with these freshly discovered connections. However, I’d be intrigued to perceive how they play out over the span of the arrangement and how it’ll affect our heroes. There are a couple of different examples when snapshots of a character’s backstory (e.g. Congressperson O’Connor) unveils that don’t appear to assume a quick part in this novel. Also, because they can be specified in passing (however they’re huge truth bombs) it abandons you pondering what more there is to the character regardless of the possibility that it’s not by any stretch of the imagination tended to here.

But that’s the intense nature of reading a book series. Cliffhangers suck.

There are such great action and attention to characters in Strange Clouds. It’ll be exciting to see what happens to the characters next. And I’d also like to thank Tinsley for sharing a copy of her novel with me! It’s been an excellent opportunity to explore her writing, the world, and characters.

To learn more about this up and coming series, check out Tinsley’s website: http://www.strangecloudstheseries.com/.

Ashley Spruill is a graduate of UNC-Chapel Hill and has spent her post-graduate career working in Public Relations at a small agency in Raleigh, N.C. When she’s not reading with movie scores playing in the background, she’s most certainly binge-watching something (and tweeting about it). Either way, she’s invested in the well-being of fictional characters and her dog.