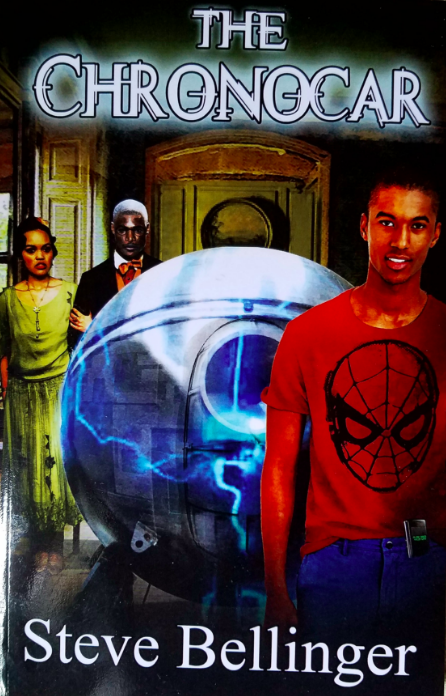 In her historical memoir, Lose Your Mother, Saidiya Hartman says, “In an apocalyptic account of history, the end is inevitable and destruction can be traced to the most innocuous and routine beginnings, like the exchange of salutations and vows of love on the Atlantic coast.” She’s speaking of the 1482 meeting between Diego de Azambuja and Kwamin Ansah. The meeting is often presented as the moment which helped set in place Europe’s relationship with Africa, from the slave trade onward.

It’s true; we look to pinpointable moments, innocuous or catastrophic to make inferences about our present day. An assassination like Franz Ferdinand’s or a meeting like the one Hartman describes are turning points or markers in the stories we make out of history. Steve Bellinger’s novella, The Chronocar, exists somewhere between this kind of “apocalyptic accounting” and chaos theory’s butterfly effect. The story, which moves across time, from the 19th Century to the 21st and back to the 20th, focuses on Black people’s experience of racism and the small, interpersonal actions that have larger consequences.

In The Chronocar, It’s Simmie Johnson’s brilliance that allows us to move backward in time. We meet this son of enslaved parents in 1888 when he’s working on a railroad in Mississippi. He’s saving his money and dreaming of the day where there will be “no more pretending to be stupid just to stay out of trouble with the white man.” And he is a dreamer, through and through, stargazing and reciting Isaac Newton’s Principia in the quiet of his mind. Though he keeps The Bible close, it’s Newton’s words that are his prayer and guidance. Quicker than planned, he’s set on his path to Tuskegee and eventually, he becomes a physicist.

In 2015, Tony Carpenter, a student at Illinois Institute of Technology, has made plans to visit Dr. Johnson. He’s found the instructions for Johnson’s time-travel invention, the chronocar. He’s also found the Chicago home where the doctor lived; it’s in Bronzeville, the same South Side neighborhood as the school he attends. He plans to visit the doctor in the summer of 1919, a critical moment in Chicago history.

The fictional Dr. Johnson, being from Mississippi and educated in Alabama, was a part of the Great Migration. The mass movement of Black people from the southern US to cities in the North and Midwest, meant a sharp increase in Black populations in cities like Chicago. According to Ken Armstrong, writing for the Chicago Tribune, between 1916 and 1918, Chicago’s Black population more than doubled. And white residents responded with violence. On a summer day in 1919, Eugene Williams was drowned by white beachgoers throwing rocks at him. The race riot that followed lasted a week.

The Chronocar depicts these moments and amidst escalating violence, a brash and clumsy Tony ends up in tragic situations. Yes, more than one, because as the first happens, he tries to fix it by going back in time, starting a loop that becomes the heart of the story.

The premise and scope of the novel are promising enough, but the book does fall into some tropes with characters who are not male and those who lack middle-class sensibilities or otherwise reject assimilationist ideals.

When we are introduced to Tony, it’s through his best friend and fellow schoolmate, Jimmy. He’s taking the train to meet Tony and though they both go to school in the city, they’re both kids from the suburbs. Standing on the platform, Jimmy is fearful enough to want to get back on the train when he sees some “dark-skinned boys…looking downright threatening.” And when he notices a woman, “strutting down the platform in a low-cut blouse,” he considers speaking to her until she answers her phone. “Who dis? Who? Where you at, bitch?” she says for no other reason than to add to the depiction of his surroundings as unsavory.

She’s one of several female characters, all of whom fall either into the category of mother or romantic interest. Though Tony goes back in time to meet Dr. Johnson, it’s his daughter, Ollie, that he spends much of his time with. She’s a hatmaker with “lovely eyes” and a romantic interest in Tony that does not seem to be inspired by anything beyond the fact that he is interested in her. And though she has the strength to knock out any boy she deems a threat, she would have been a far more interesting character if she was allowed some space beyond Tony’s desires.

There are other strange characterizations like Tony — though the most well-developed character — is described as having never experienced racism. And rather than showing the complexity of human nature, Bellinger chose to juxtapose unrelenting white violence with very good white people willing to defend Black people. Both of these oversimplifications seemed to have been made for the sake of telling a succinct story that is really about an idea: the relationship between our individual actions and larger consequences.

In The Chronocar, Tony’s actions have the capacity to be an assassination or a fateful meeting.  But as the story’s twist implies, the conditions under which Black people today live are largely a result of one man’s greed. And while this does feel fateful and apocalyptic, we can also consider ourselves to be like Tony, as the consequence of some brilliance that came before us.

You can read an excerpt of The Chronocar on the publisher’s website.

Nina is a reader, writer, and cultural worker. She lives in Chicago, IL.

The Ordinary Lack of Representation in The Handmaid’s Tale