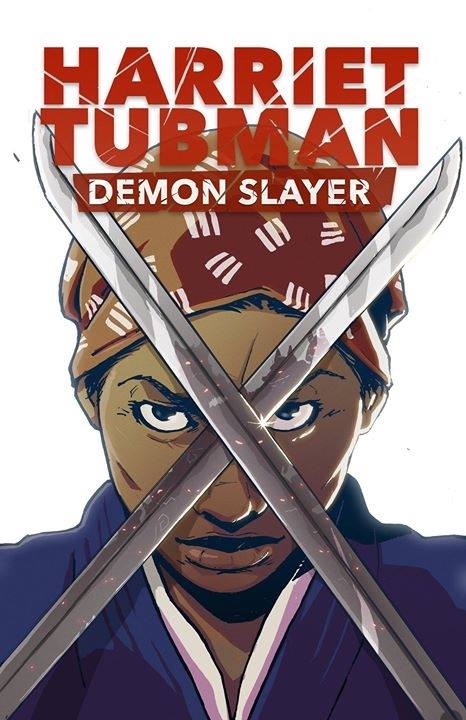 The art of the historical/genre-fiction mashup has slightly waned lately, but we have a new one to look forward to after its successful Kickstarter campaign. Harriet Tubman: Demon Slayer – a somewhat odd sequence of words that still manages to roll off the tongue with a flourish – is one of the first that I can think of which specifically regards a historical African-American hero. Where Abraham Lincoln Vampire Hunter possessed a certain level of kitsch, thanks to its rather mesmerized and more ubiquitous subject, using Harriet Tubman ups the ante by comparison.

In spite of its rework of the abolitionist American hero’s story, I wondered at times while reading the comic if there was something too precious about this real-life, super-heroic individual who arrives to this treatment with her own assortment of impressive legends. Perhaps the most famous one is that she kept a revolver at her side for self-defense, but would also use it to threaten an escaped slave if they decided to quit and return mid-journey. Elements of this legend seem to echo in the book, which imagines Tubman as a tough-as-nails combatant levying katanas against vampiric slave-hunters.

While the personification of slavery – a crucial pillar of America’s shameful, formative past – as being beholden to a supernatural creature’s bloodlust is a provocative concept, I also feel like it might put some people off. It’s not to imply that slave-hunter-as-demon is, like, an impossible connection to forge, but I’m also more forthcoming with the notion that their decisions and agency were decidedly, selfishly, recognizably human, and wonder if retrofitting these people with demonic branding removes some of that culpability. This is not a conclusion I’m ready to commit to, though, especially since the first issue gives us a very small taste of the wider-reaching supernatural mythos, so I’m willing to trust the comic to investigate this fiction more thoroughly in further issues.

Dispensing with these shakier aspects, the comic looks terrific. Full-color hack-and-slash antics comes courtesy of artist Courtland Ellis, frenetic and busy, but more grounded than what’s shown in his other comic Stabb Gunner. It works well with the themes, and I love how the Harriet Tubman character is always positioned among monsters in an unimpressed stance, physically-diminutive in comparison to them but lethally unafraid. The story itself regards the nighttime escape of a family of slaves, set upon by slave hunters in a forest who reveal themselves to be vampires. Tubman swoops in to save the escapees, katanas akimbo, but the story ends shortly thereafter. It’s not a tremendous amount to work with, which means that Ellis only leverages a limited color pallet to design these few moonlit scenes. All the same, the art is eye-catching, with an excellent feel of movement during the action; a perfect example would be the two-panel mule kick on page 19. Good stuff. 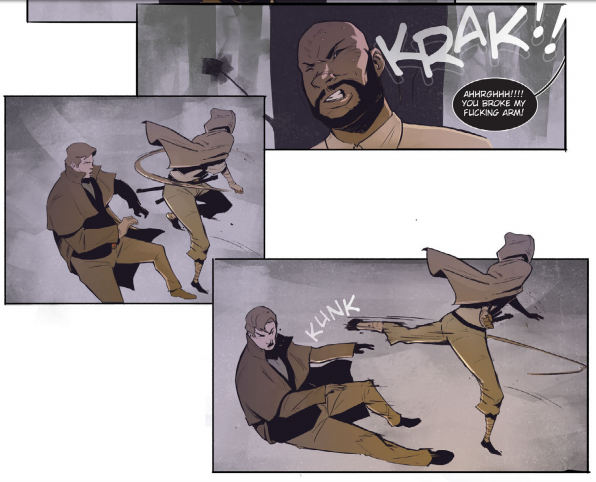 Creator David Crownson’s writing is able to motivate the all-too-brief story, although readers should be aware that the comic contains considerable profanity and use of the n-word. Since there isn’t a lot of time passing in this first issue, the bulk of the script is devoted to action scenes and only hints at the wider world of the fiction. It’s a fine kick-off to a series, but lacks much in the way of plot development.

If an extended action sequence and some exposition threaded into banter sounds like the type of thing you want to check out, give Harriet Tubman: Demon Slayer a shot, and look out for some nice variant covers by the likes of Marvel’s Joey Vazquez and the always wonderful N. Steven Harris. I’m interested to see what else they do with the story, and am especially curious if the remainder of it will be fashioned from whole-cloth when revealing other sorts of demons, or possibly incorporate specific elements of African and/or African-American slave narratives into the greater mystic lore. 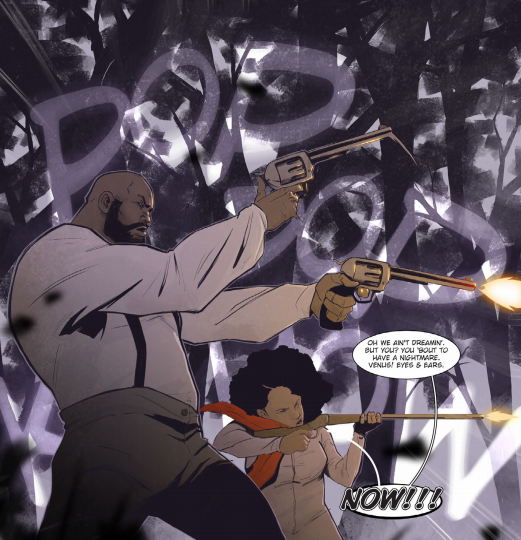