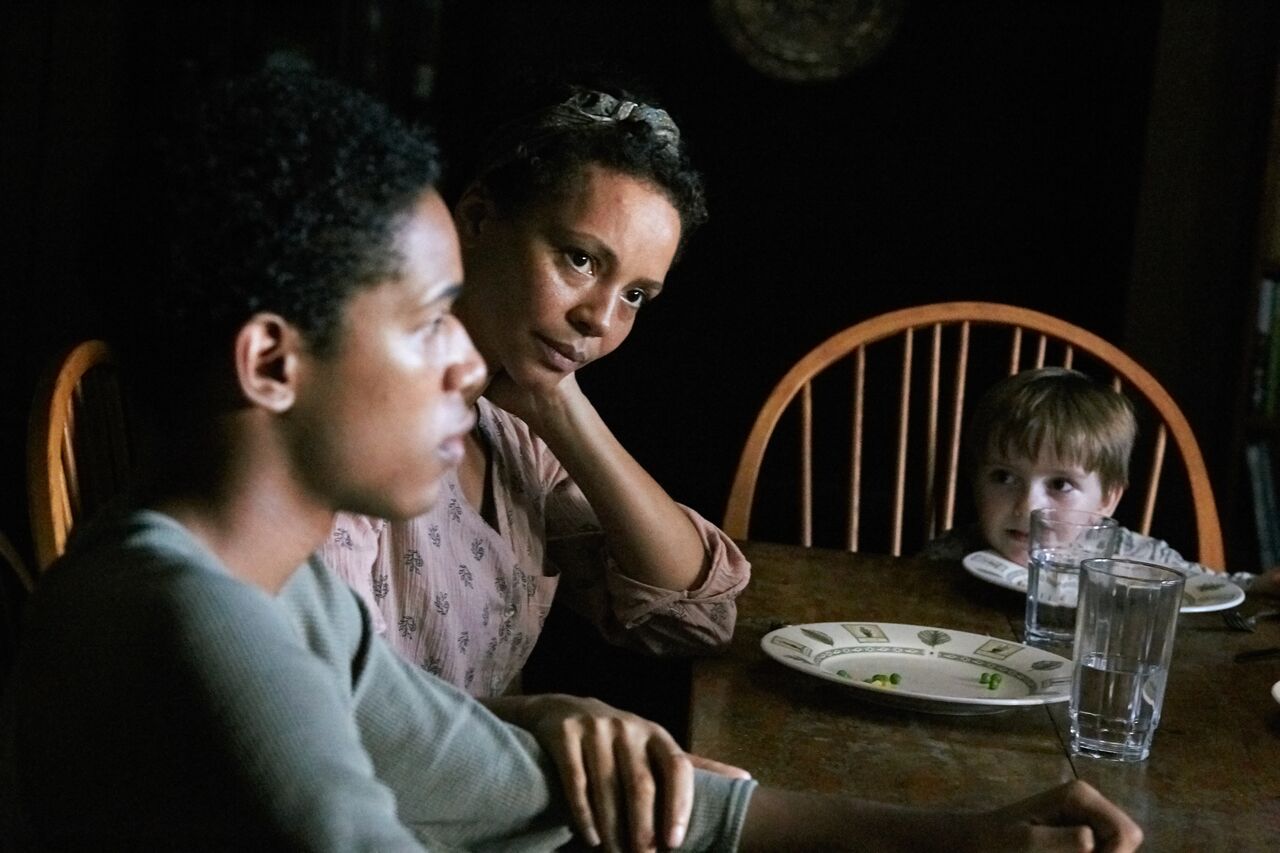 In the wake of a plague, your family is the only thing that matters, but interacting with the world outside your home is the only way you will all survive. That world is uncertain, opportunistic, sometimes it lies to you, sometimes it approaches you with its own set of family variables and values. You can fight at the border as much as you can, but it will eventually get in or, alternately, you will be forced to travel through it. Maybe the right choice is to let it in, attempt to understand who lives beyond it, find something about it to trust, so that you might effectively combat the night together.

The film begins and Bud (David Pendleton) is dying, covered in sores and incapacitated in a daze that looks painful and absolute. Paul (Joel Edgerton) and Sarah (Carmen Ejogo) deliver their choked goodbyes, Paul brings his catatonic body to a prepared grave in a wheelbarrow, after which he is killed and incinerated before burial. The introduction to It Comes At Night is punctuated by labored, loud breathing, a motif which returns throughout the story, often comparing the breath of the dying with the breath of the living through their toxin-filtering masks. We are given small but prominent details in the first few minutes. Bud is clearly Sarah’s father, since they are both Black. Sarah refers to Bud through tears as “Dad,” while Paul, her husband, more expansively calls him “Grand-dad.” Paul deals with this burial alone, and his son Travis (Kelvin Harrison, Jr), spared the sight of this mercy killing, remains inside devotionally caring over his dog Stanley, who seems a remnant familiar of his grandfather. This nuclear family lives in an expansive cabin house in rural America, locked and protected behind a prominent red wooden door. 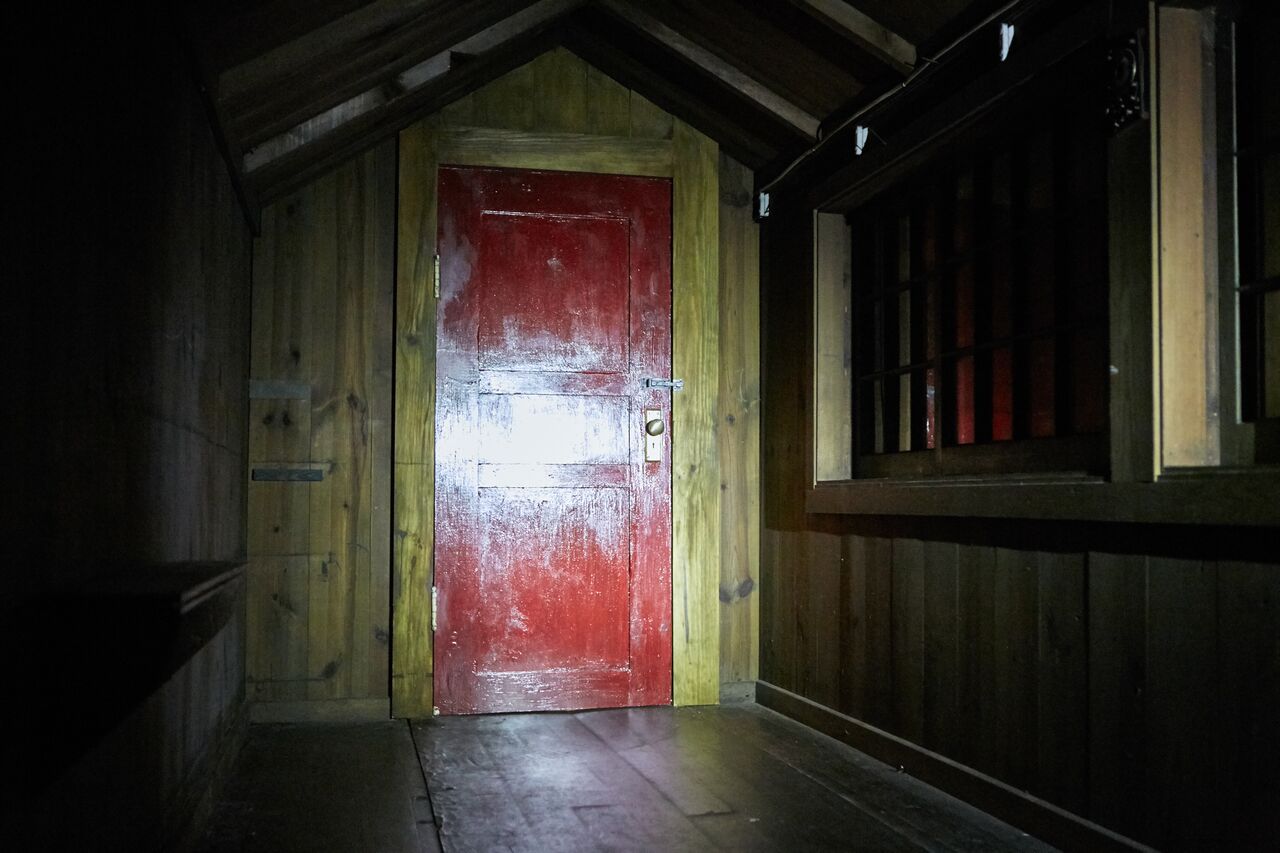 It Comes At Night is the second film by passionate newcomer Trey Edward Shults, after his bizarrely intimate, crowd-funded indie-darling Krisha. These two movies operate somewhat in tandem; the latter being an intimate, voyeuristic perspective on a black sheep attempting to reunite with their family, the former a horror film that centers around family dynamics. Some overpowing themes this time include doubt, survival, and those stark borders, a concept that might protect against invasion or express ownership, but ends up informing community on each side.

A plague has beset America, this much is clear, but while the exact ramifications, scientific details, and manifestations of the disease are never explicitly outlined, their vagaries emphasize the narrative and sidestep expository mire. It Comes At Night describes what you need to know in its own confident cinematic language; for instance, the house that acts as its primary setting is never fully detailed and mapped out, which acts as a symbolic metaphor for the similarly mysterious dimensions of the people who dwell within it. This might, at times, cause the film to lack a sense of place, something I might normally take issue with. One of the reasons I loved Iranian horror film Under The Shadow was due to the way it sensibly mapped out the apartment building it takes place in. Yet in this case, the incomprehensible cabin profoundly and effectively filters the aforementioned themes, translating as part of the experience rather than a flaw in the design. 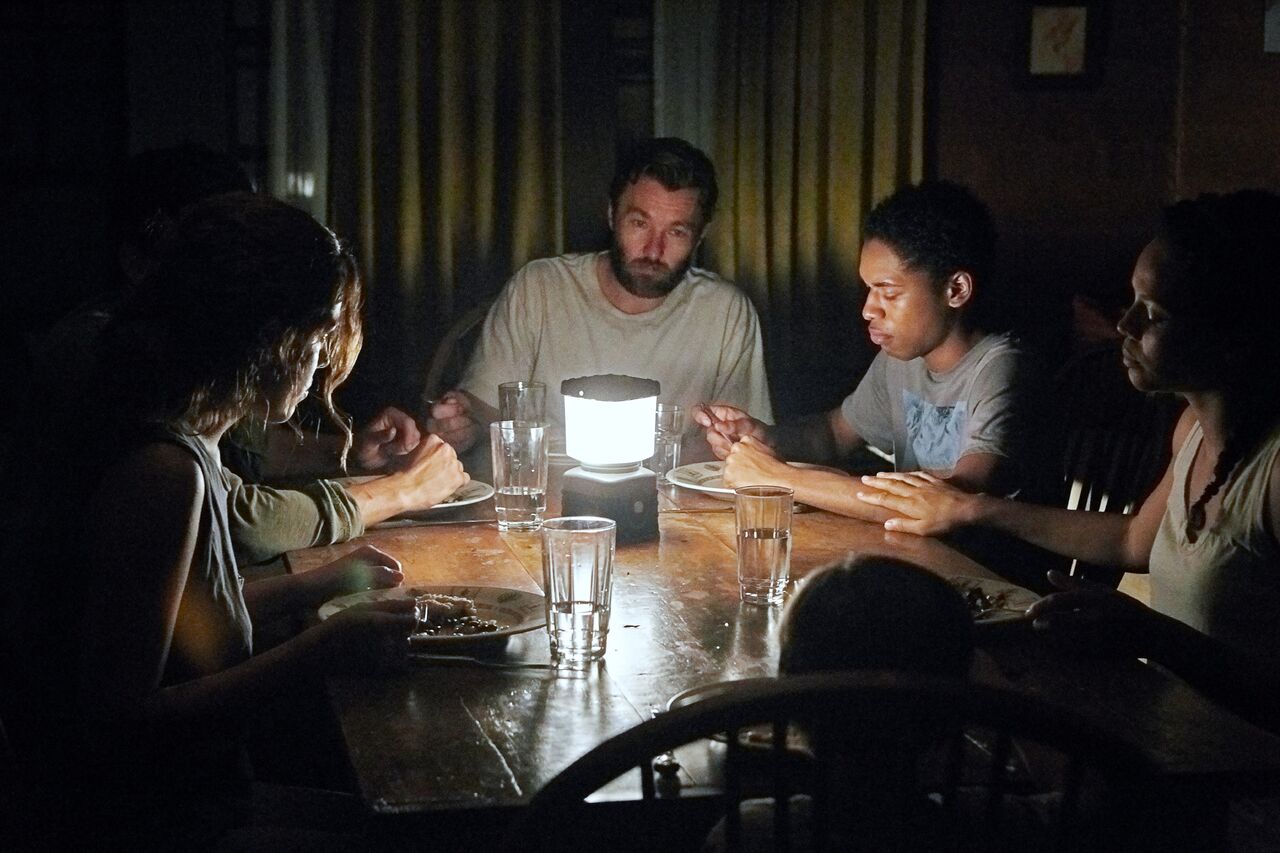 Sometimes I wonder whether horror films have taught us over time to approach every character with suspicion, or whether they deliberately tease out our already ingrown skepticism. There is a part of me that wishes that I never knew a film was going to be part of this genre beforehand, because I will end up spending my time performing repeated character take-downs of every new individual introduced on-screen, becoming a kind of “slasher sherlock.” Maybe that’s why I was so distrusting of Will (Christopher Abbott), the would-be-invader and potential innocent that motivates the main plot and its conflicts. I became preoccupied with deconstructing his verbal tics (for one, he responds to most questions with a lingering “Huh?” before properly responding), convinced that they were evidence of his dishonesty. And yet, by the end of the story, I’m not convinced that the deception was definite, or if it even really mattered if it was. The characters here don’t seem to be entirely forthcoming with each other, but this doesn’t necessarily identify them as heroes or villains, either, simply human beings protective over their families.

I’ll spoil the movie only by saying this: no, their home is not set upon by rampaging zombies. Their boarded windows are not torn to pieces by bloodthirsty rednecks with chainsaws. There are no ghosts or demons under the floorboards or sacrificed teenagers interrupted mid-coitus. There is only the impressively monolithic unknown, and the many ways it might test a family’s humanity.

Storytelling in It Comes At Night wavers between the economical and the outright obscure, and there is no obligatory voiceover or newspaper headline credits-roll. The very few moments that could be described as exposition are logical and straightforward, with the most overt one occuring smack in the center of its runtime, where a full table discusses how best to keep busy, the rules of remaining in the house, and how to go the bathroom. The cinematography and sound design are incredibly central to the narrative as well, contributing ambience and emotional weight, especially during some highly unsettling dream sequences. 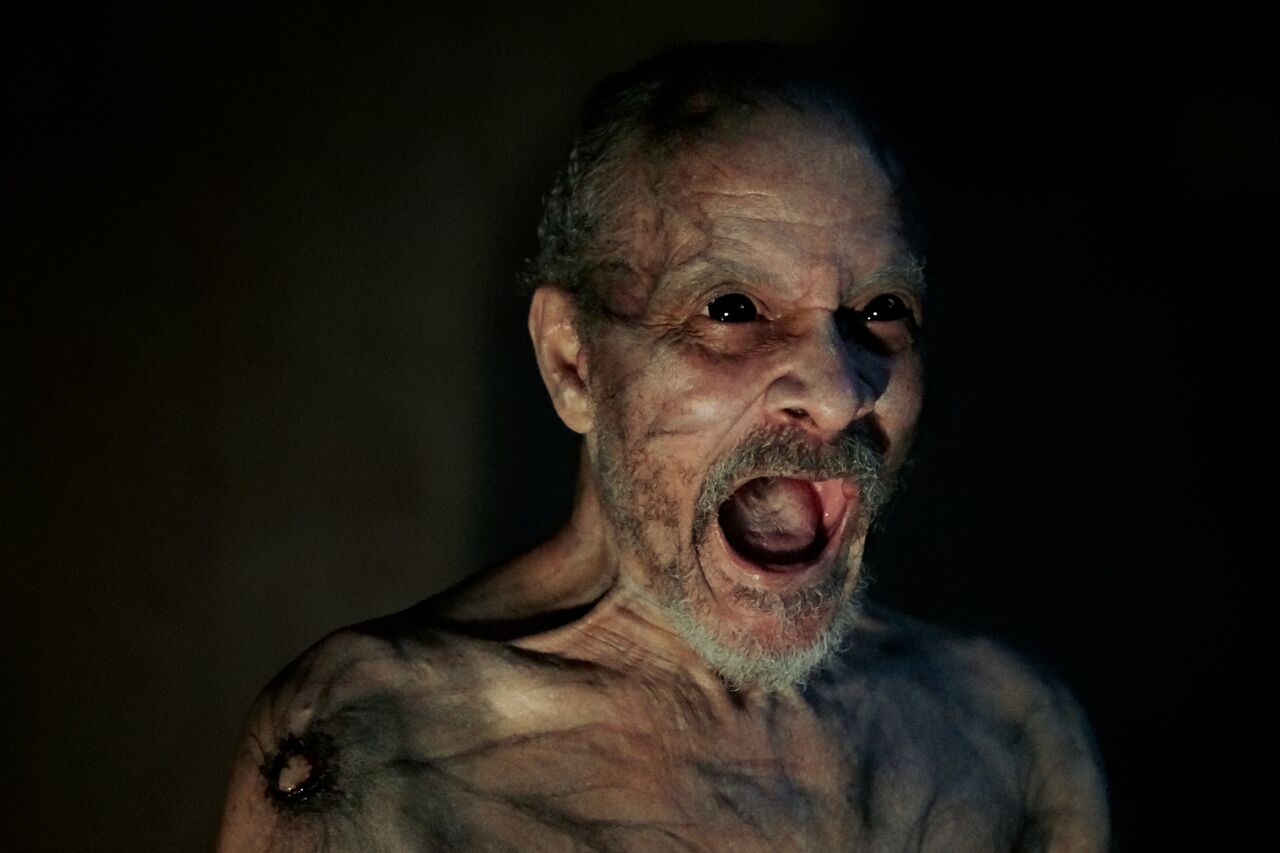 Which leads me to mention budding newcomer Kelvin Harrison, Jr as Travis, who devotedly takes on this complicated role and delivers the widest range of the performances. While he is obviously protected and cherished by his parents, he is also seventeen years old, elevating his character into a churning presence who wishes to break free, a young man who suffers the isolation and sadness differently than the adults around him. I also instantly trusted and affixed to Paul, who struggles for a clearheaded, sympathetic, and usually reasonable approach to danger. Sarah, unfortunately, might have the least amount of screen-time, but Ejogo shines in her character, and is more prominently featured in the latter half.

Allegorically speaking, It Comes At Night wants to tell a story about borders, invasion, and diplomacy. The central family remarks at some point in the film that while they have a sufficient supply of potable water, food is scarce and will eventually run out. Resources might be available, but the specter of its absence hovers in view, which makes the thrust for community and alignment with strangers the best option, aside from simply killing another family and stealing their food. Paul comments that they always make a point to eat meals together, something evoked in an earlier scene; this might be for practical, mental-health reasons, but it also might hint at a “family values” front, an insistence that a semblance of normalcy among the horrific madness must be maintained.

I probably don’t have to mention that at this point, in 2017 America, this talk of borders, insecurity, and family values seems profoundly relevant. And while I don’t want to imply authorial intent to the director (and lacking awareness of when the script was first penned), its release date is appropriate to our country’s conversation and made these elements conspicuously meaningful to me. 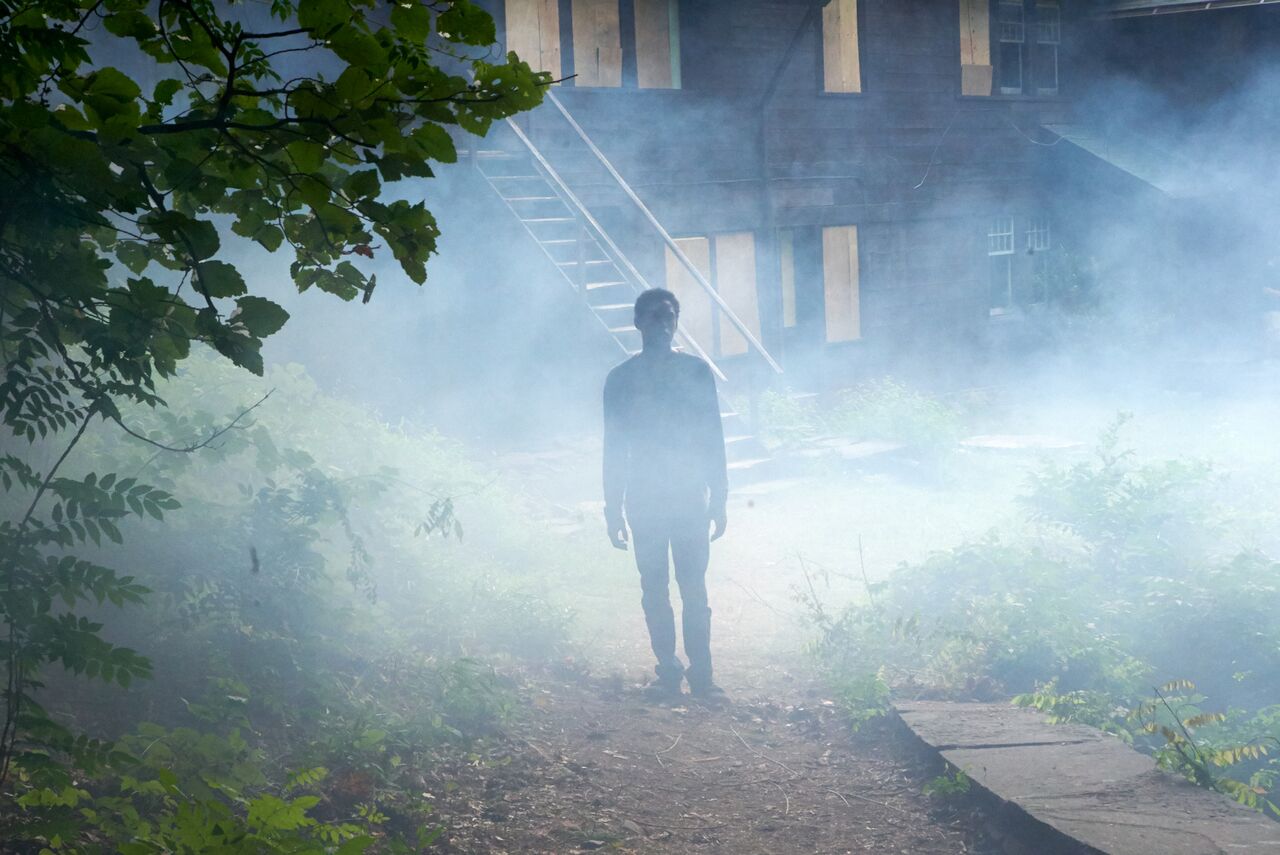 Funny how, in spite of how fresh the movie feels throughout, I still kept expecting the plot to lead to a paltry, Shyamalan-esque climax akin to The Village. Shults could care less about these tidy conclusions, which only increases the powerful, unpredictable menace of the film’s final moments. For those interested in jump-scares, you’ll certainly find several here, but the real reason you’ll appreciate the film is the omnipresent dread, the inconvenience of its characters’ dreams of a peaceful outcome. Stressful, dark, and emotionally exhausting, It Comes At Night is a truly haunting experience, and I still can’t get the very last shot out of my mind.

It Comes At Night releases in theaters nationwide this Friday, June 9th.