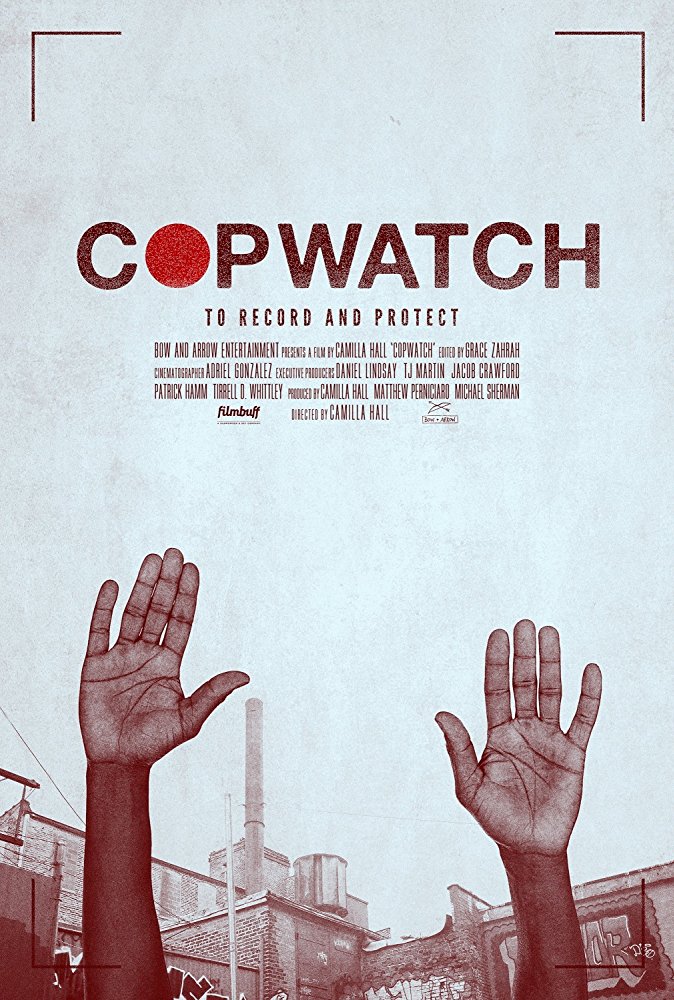 Whether or not the revolution is set to be televised, it’s definitely being recorded. The next (figurative) viral molotov could be a low-def video on Instagram, posted by a child lounging outside their mom’s bodega, or the live feed of a 45-year old weekend warrior shouldering top-shelf gear. The strange, near-democratization of rampant and, frankly, unchecked self-documentation has evolved the spirit which recorded the Rodney King assault into a casual way of life for a remarkable amount of people in the urbanized world, and beyond. Copwatch—the loosely networked series of social activism groups which fastidiously document police interactions with non-police—and documentary Copwatch are two different things at their core; in the former, there is a certain invisibility and anonymity inherent, with individuals sort of melting behind the scenes as their recordings become sacrosanct. Camilla Hall’s film, on the other hand, seeks to discover the character behind those individuals who hit the red button.

It’s quite compelling to watch people…well, watch other people, and Copwatch tries to couch most of its action on this notion. The film ends split between deep, rather thoughtful asides with the members of the WeCopwatch organization, extended scenes of watchers documenting police (to the perpetual, incriminating bellyaches and threatening complaints of these cops), and some background info that centers the story in time. It’s arduous content, especially the replays of police-conducted murders; these are images which, arguably, many viewers will have seen, or at least known about and chosen to avoid. There’s a push towards re-contextualization for these videos as a potential thesis of the documentary itself, but I’m not particularly sure that these tragedies are granted deeper profundity as a result.

The people we are introduced to and spend time with, especially Kevin and David, would often rekindle my involvement with the story. The characters of these cameramen is complex, and their point-blank insights reverberate. Watching Dave lovingly fuss with Michael Brown’s shrine, or listening to him communicate his awe and somber appreciation of the rose petals that adorn the yellow median on the adjacent road—even his humble anecdote about early meals with his partner, all of it was touching and memorable.

It’s a shame, then, that any kind of narrative that starts to take shape is diverted for a thorough exploration of Ramsey Orta, and the forces that interrogate his future. Which is not to say that Orta’s story is not worth relating; verily, I found much of this content provocative, even poignant, especially in the sense that it’s been all-but eradicated from mainstream media, save for pointed half-baked headlines that seek to demonize him or call his character into question. It’s just that Copwatch decides to follow his emergent thread, right after introducing us to the others on the ground, and Orta’s narrative and legacy is almost too large to responsibly compete. It becomes a have-your-cake-and-eat-it kind of thing, and the intimacy earned with the lesser-known players gets out of the way of Orta’s sad and frustrating tale. To their credit, I don’t believe that this is unkind to people like Kevin and David, and I’m reasonably sure that they are happy to uphold their fallen comrade and let the camera rediscover him in this rare profile. Still, I would’ve liked these stories as two films, instead of one.

I am slightly ruffled about the seeming lack of attention made towards women, though, and wished to learn more about women copwatchers. There are some who seem to buzz around the focus of the story, but rarely if ever do they feel realized or granted a platform. But, I also know quite little about the structure or agreements made in the creation of Copwatch, and it is entirely possible that they chose to be left out. Clearly, the people who conduct this public service expose themselves to intolerance, abuse, and harassment by the individuals (and systems) they capture on film, and choosing to be represented in an allied narrative like this must have been a complicated, careful decision. Thus, I wouldn’t fault anyone for opting out of being centered in this film.

What is clear is that stories-behind-the-stories are duly compelling, and I would hope that this documentary inspires others to find out how they can support the progress being made with affordable recording technology and community outreach. Copwatch provides an interesting and valuable look at a group of people affecting change for the better, empowering them with more fully realized portraits than the evening news ever will.

Copwatch can be purchased on iTunes at this link