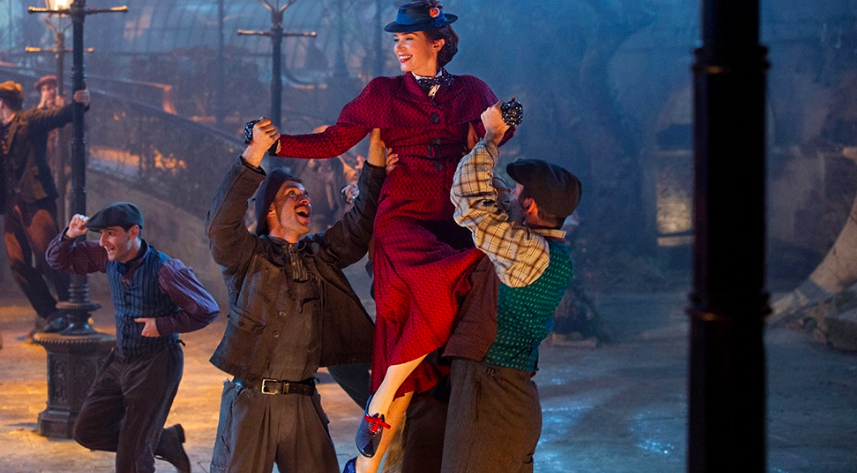 The most anticipated fantastical tale of the year — Disney’s Mary Poppins Returns is brimming with charm infused with nostalgia.  It will have adults feeling like kids again while delivering a refreshing take that young audiences will enjoy. In this movie sequel to the original, director Rob Marshall introduces us to the next generation of the Banks family.

We join them on a journey of discovery and unearthing what the real joy of adventure and friendship is all about.

Under the foggy skies of London, we meet Jack (Lin-Manuel Miranda) bewitching us with a cockney accent in the enchanting musical number “(Underneath The) Lovely London Sky”. Composer Marc Shaiman (Sister Act, First Wives Club, Hairspray) opens with an eloquent melody playing over the film’s opening titles.  Painted imagery in the opening credits includes various scenes throughout the movie.

The Banks children, Jane Banks (Emily Mortimer) and Michael Banks (Ben Whishaw) are now adults taking care of Michael’s children.  His sister Jane, stepped in to help Michael when his wife, Kate, passed away a year ago. 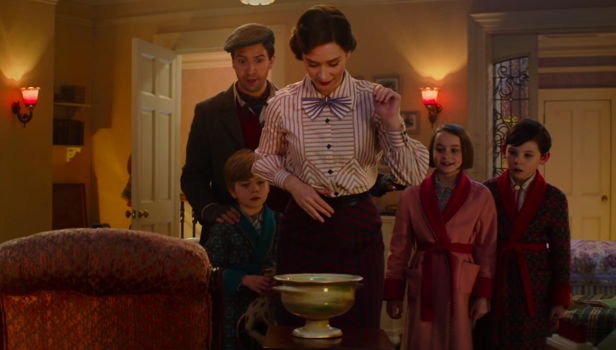 Mary Poppins Returns maintains the purity of the original using the backdrop of financial hardship as a source of conflict in the story. In this updated version, Michael Banks is visited by two attorneys that represent Fidelity Fiduciary Bank. They inform him that he owes money to the bank.  Michael took out a loan last year against the value of his home to support his family after his wife’s passing. He is now three payments behind, and the bank is demanding that Mr. Banks pay the entire loan in full.

Unfortunately, the balance is more than what Mr. Banks can afford and he has a bit of a dilemma on his hands.  His sister Jane reminds him that their father left shares in the bank to them and they can use that to pay off the loan.  However, they have to provide a share certificate as proof the shares exist, and the family is on a mission to locate that document with a small window of time to spare.

In one of the greatest performances of her career, Emily Blunt shines in her portrayal of Disney’s most iconic live-action character.

Julie Andrews would be proud of Emily Blunt’s impeccable portrayal.

ALSO READ
Review: ‘Not Okay’ Is Not Just Okay, It's *Chef’s Kiss*

Mary Poppins remains supernatural and magical as she hasn’t aged a day since she last visited the Banks’ family. Jack remembers Mary Poppins from when he was a young chimney sweeper and is delighted to see her return.

Mary Poppins Returns illuminates with stunning visuals and impressive CGI effects as evidenced during the “Mary Takes Charge” and the “Bowl Spin/Into The Bowl” numbers. Disney keeps it consistent with mixing together animation with live-action and the two flow together beautifully. If you are expecting to hear a remixed or new rendition of classics like “Supercalifragilisticexpialidocious”, “A Spoonful of Sugar” or “Chim Chim Cher-ee” you may set yourself up for disappointment. Mary Poppins Returns features all new original songs just for this sequel.

However, don’t be dismayed, adding super-talented heavyweight Lin-Manuel Miranda to the soundtrack adds a bit more vitality and charisma. And you can certainly expect to hear some Hamilton-style freestyling in one of the musical numbers.

Nearly every whimsical storybook movie has its villain and Mary Poppins Returns delivers that in the form of William Weatherall Wilkins (Colin Firth).  The greedy manager of Fidelity Fiduciary Bank is determined to have the Banks’ family home foreclosed on.

One of my favorite scenes in the film features the illustrious Meryl Streep as the character Topsy, Mary Poppins’ eccentric cousin.  Topsy has a unique European accent and is dressed like fashion designer Betsy Johnson — with the colorful personality to match. The scene involves an earworm of a musical number, that takes the audience on an upside-down-flippity-floppity ride into Topsy’s world. While it’s a fun scene to watch, the message behind the song resonates with a powerful message.  You can control your perspective, and what can appear to be upside-down in your life, can also be turned right side up if you choose to see it that way. 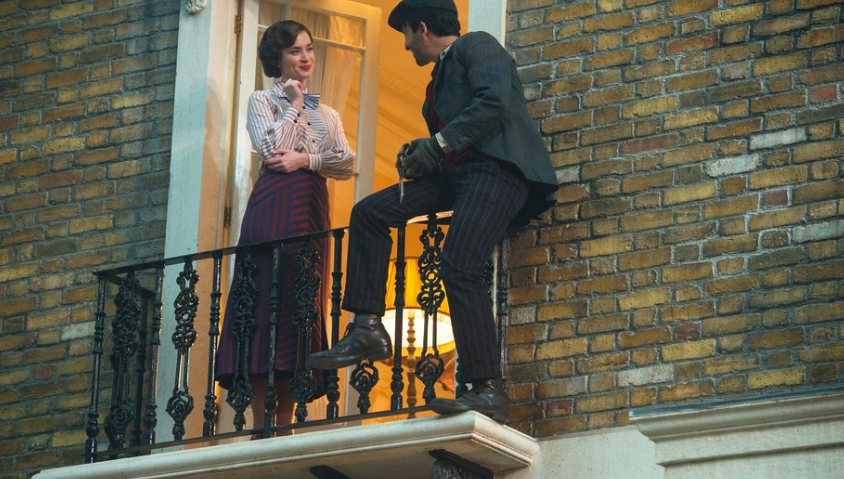 Mary Poppins Returns is the perfect connective tissue to the original.  The connection is so seamless, it’s hard to believe over 50 years have passed since the first film was made. This sequel is one that will endure in pop culture as one of the most beloved musicals of our generation.