Number 37 is a movie about petty crime, set in the world of young, hopeful people in a low-income block of flats in Cape Town, South Africa. The story is told in a set of parallel accounts that give the viewer a glimpse of life from each character’s standpoint. The narrative is spun beautifully to show how their paths eventually cross and remain entangled until the end of the movie.

The protagonist Randall (portrayed by Irshaad Ally) goes from being a young, able-bodied hustler and petty criminal to a helpless, wheelchair and homebound dependent on his girlfriend Pam.  She’s a character played by Monique Rockman whose devotion and loyalty is commendable. Pam buys Randall a pair of binoculars to help him keep busy while she is at work. This enables Randall to partake in the world around him, even if its just as an observer. Inevitably, Randall’s curiosity and his new toy lead him down a path that threatens to completely ruin, if not end, his life and endanger everyone he holds dear.

Girlfriend Pam’s commitment and devotion to Randall is put to the test by his current state of seeming hopelessness due to being physically impaired. She quickly steps up as breadwinner and protector of their livelihood and strives to escape the life of petty crime and build a new life away from everything associated with life prior to the accident. Monique Rockman shines as a dutiful, loving and unwaveringly supportive partner who is soft and caring, but also extremely assertive and strong in the face the harsh realities of dealing with crime lords, misogynist men, and finding her own voice and place in everyday life.

Close friend and unwilling accomplice in Randall’s latest scam, Warren is brought to life by Ephraim Gordon, who makes the character not only believable but almost likable. Warren is a product of his environment, an opportunist whose self-serving interests lead him to make unwise decisions that land him in deep trouble. He has a crush on Pam that is unmissable, even though the object of his affection is seemingly oblivious to his overtures.

Loan shark Emmie and drug dealer Lawyer are the most prominent faces of the Cape Flats crime cesspool and are played by Danny Ross and David Manuel respectively. Both have an undeniable command of their individual areas of criminal expertise and are ruthless in their dealings with people who cross them, or are perceived to be breaking their self-written rules. It is interesting to see that while Lawyer operates openly under the protection of corrupt police officials, Emmie quietly operates in the underworld. Even as both men exist on the fringe of society in a pool of lawlessness, they do have their own rules by which their followers must abide. 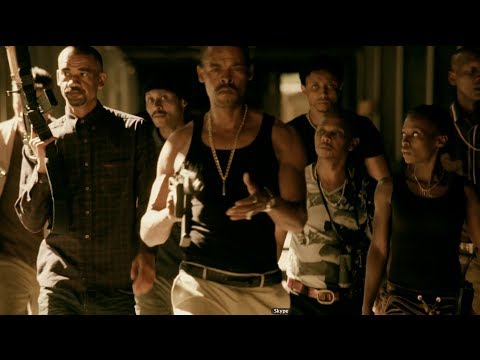 Detectives February and Meyer show what it is like to police in a community that is inherently distrustful and disdainful of law enforcement. On the one hand, the force is full of corrupt officials who work hand in hand with criminals behind the scenes. On the other hand, there are officials who genuinely care about cleaning up the streets and making it safe for all residents. The interaction between residents, whether criminally inclined or not, and law enforcement is reminiscent of any given society today where the inhabitants are less privileged, forced into specific corners of town where funds for infrastructure, development, and healthcare are low or nonexistent. Cape Flats could be an apartment block in South Bronx, New York, or a high rise building in Brixton, South London.

Director Nosipho Dumisa, one of South Africa’s first female feature film directors pays homage to Alfred Hitchcock’s Rear Window with this gripping movie about life as a not so innocent bystander in a community filled with crime, crushed dreams, and stolen childhoods. This movie makes one reconsider what it means to be a good person, and what it takes to be classified as a bad person. What is the difference between a good person doing bad things in order to survive, such as the anti-hero Randall, and a bad person doing good things for the greater good as he perceives it, as in the case of Emmie who so willingly lends out money to those in need at their hour of need?

Although it leans heavily on Hitchcock’s Rear Window, for inspiration, Dumisa’s Number 37, leaves no doubt that a crime has been committed. Our protagonist, although physically impaired, is in full command of all his senses, and has witnessed the crime being committed. Also, the protagonist here in Number 37 is in a committed relationship with his female counterpart as opposed to the reluctant boyfriend in Rear Window.

In fact, the relationship between Randall and Pam gives the movie some substance, in that it provides a warm fuzzy feeling in the gut, providing a break from the otherwise grim existence of the residents of Cape Flats. Their relationship symbolizes hope, a life beyond Cape Flats. It is tangible, real, pure and true. It’s alive amidst the chaos and debauchery and keeps them alive.

All in all, Number 37 is one to watch. It is gripping, moving, tense, and plays heavily on your emotions as events unfold. But in the end, it all comes together beautifully. This is a story well told. The viewer can’t help but be immersed in the story from the opening scene to the end credits, silently rooting for the underdogs.

Bio: Titilayo is a multilingual, vegan, chai tea lover and travel enthusiast who currently splits her time between New Jersey, where she works, and Georgia, where she resides. Snippets of her life can be found on @skydivatee (Instagram) and @folaswelt (Twitter).