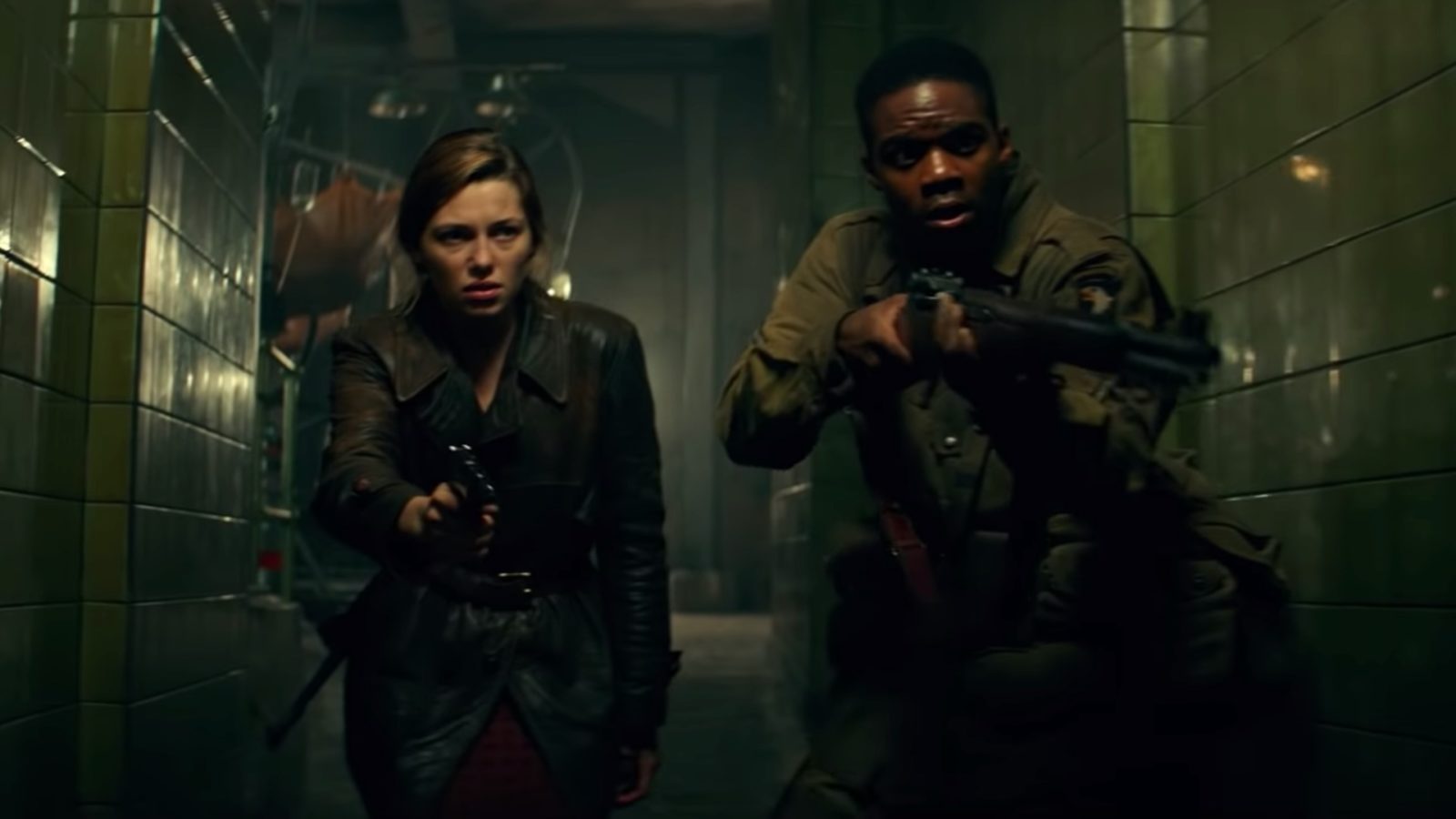 When they told me that I was going to watch a movie with zombies and Nazis in it, I thought it was a Call of Duty adaptation. Then, I sighed and settled in for a campy Stan Versus Evil-wannabe-movie. But, the film grabbed me from opening scenes with Bokeem Woodbine barking orders at a squadron of soldiers just moments away from diving into a war zone. I was gone through to the later episodes of sheer terror deep inside the Nazi stronghold. Overlord is never campy nor a film like any you’ve seen yet.

JJ Abram’s latest horror offering embodies the type of film that America needs right now. It’s one where we can freely suspend belief for two hours without sacrificing our values or our cinematic taste. The film respects the history of D-Day and WWII that informs it while using a Black lead in a role that allows us to seamlessly see him as a part of the plot. He’s not an “othered” device meant to elicit a message or support the story arc of another whiter character. No, Jovan Adepo’s Private Boyce is a scared soldier who is forced to stick to a vital mission, even if it scares the hell out of him.

A Private’s Point of View

In a recent interview with BGN, Jovan Adepo explained how the audience gets to experience that entire mission through the eyes of Pvt. Boyce. His fear, naivete, and inexperience are all weighing heavily upon the soldier’s shoulder with every creaky door he opens and every corner he turns. I saw exactly what Adepo meant when I screened the film. Those emotions heighten the “shock” of each scare and make the action scenes much more intense. For example, when the private is forced to jump out of a plane at the beginning of the film, he is wide-eyed and terrified. So was I.

In classic Abrams style, all hell breaks loose on the screen and it engrosses the audience. We hear the bombs dropping, planes crashing, people screaming from injury. The graphics of the metal, bodies, fires, and firepower mixing in a chaotic midair soup only levels up the terror, as we watch Boyce fumble for his parachute. Our adrenaline is almost as amped as his, as we watch the private struggle. But, reaching the ground is not safe. His squad members are dying as they hit the ground. If the crash didn’t kill them, the Nazis on the ground are. Boyce is saved for the first of many times by Ford, his superior, played by Wyatt Russell. Ford is experienced in war and we are thankful, he is the only thing keeping Boyce alive as some of the most vital members of the team meet noble deaths.

History is the solid ground that Overlord stands on. Boyce’s and his tattered squad end up in the woods running toward their mission, a centuries-old church in the middle of the French countryside. Somewhere inside that church is a signal jammer that is disrupting the biggest operation being planned amongst the Allies in WWII. Today, we call it the D-Day invasion. But, in this story, before the heroes could storm the beaches of Normandy to get the upper hand in the war against Hitler, they first needed that jammer in the church taken out. Thus, D-Day paces the film, serving as a ticking close that keeps the story tension high. It also grounds the story in history, making it easier to suspend belief and let ourselves loose in the narrative.

The history is close, but not completely accurate. Boyce, a Black soldier would not have served in a mixed squad with white soldiers at the time. This pre-Civil Rights Era film would have seen more racial tension amongst the characters in real life. However, doing so would have drawn the film into a realm where it could not sustain itself. Overlord is not here to teach you the social history of D-Day, it’s here to entertain you, using the time period and the historic event as a means to an end. In fact, many viewers will find that, in today’s world of racial strife battering down on us at every turn, it is easier to suspend belief when the rank of a soldier is louder than his race. Ford and Boyce demonstrate the latter throughout the film.

She’s Not Your Damsel

The squad gets to the home of a French woman named Chloe, played by Mathilde Ollivier, who we quickly find has been surviving and caring for her brother and aunt during the Nazi occupation. She is nobody’s damsel, using everything in her disposal to gain whatever she needs to ensure that her family lives to see another day. Such a strong, unapologetic woman is the perfect ally to infiltrate the church. She is also the catalyst for Boyce’s puppy love that is at time funny and also awkwardly embarrassing to watch. She is the one who tells them of the Nazi experiments. Her aunt is proof. 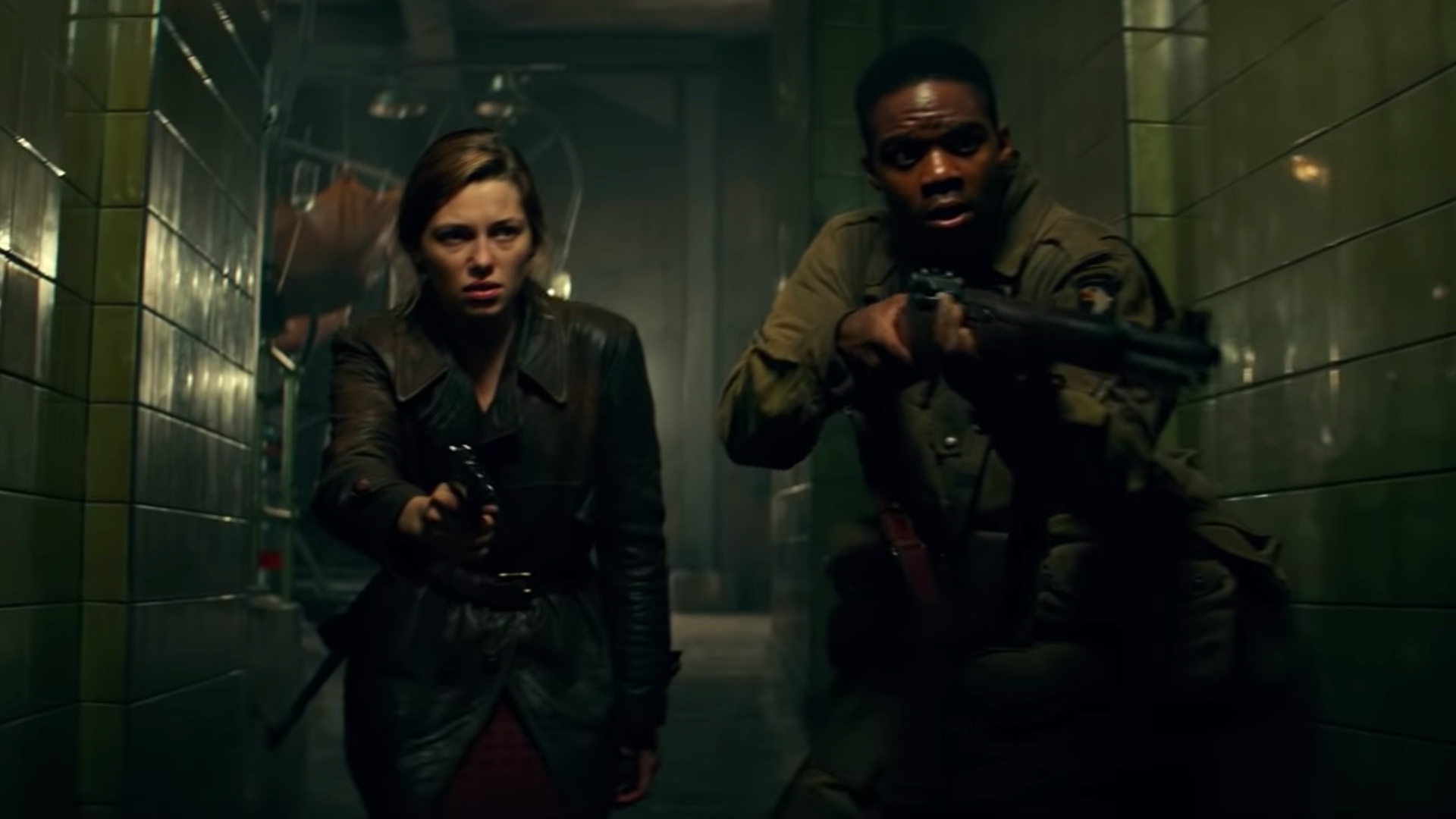 In the end, Chloe joins the team to save her family, her home, and the D-Day invasion from monsters that must never see the light of day. Along the way, Ford learns that there is sometimes more to a soldier’s purpose than the mission, Boyce finds his courage, and the audience finds out the limits of horror appetites.

A Classic If There Ever Was One

Adepo and everyone who has seen Overlord calls it a true war film…and also a true horror film. Abrams and Julius Avery create a story that combines the two without sacrificing the important elements of either genre. They don’t cut corners on the war scenery, the backstory, and development of the soldier characters. Similarly, the horrific elements are just as strong, with the monster reveal late in the film so as not to disrupt the fusion.

When the audience is introduced to the monsters, we are ready for them — at least we think we are. By the time the movie fuses both genres squarely together, we are well into the madness: Ford is fighting to save D-Day despite the horrors he sees, Chloe is so desperate to save her family that she unleashes a greater evil, and Boyce is the most terrified soul amongst them and also their salvation.

Rarely do you see a film that allows for complete immersion from start to finish, but Overlord delivers that and more. The only thing that disappointed me about the film is that Paramount didn’t spend the big bucks to advertise it. Overlord is the type of film that becomes a cult classic. One that you can watch over and over again without growing tired. I know. I’ve seen it three times and it just came out Friday, November 9.

Overlord is in theaters everywhere.