Starring Dwayne Johnson, Naomie Harris and directed by Brad Peyton, Rampage is based on the popular 80s video game of the same name. The film follows a primatologist at a San Diego Wildlife Sanctuary Davis Okoye (Johnson) and genetic engineer Kate Caldwell (Harris) as they try to prevent three genetically mutated animals; a gorilla, wolf, and alligator from destroying downtown Chicago.

After disaster strikes onboard a research space station, a scientist is ordered by her boss at Energyne, Claire Wyden (Malin Akerman) to save company’s genetic test samples at all costs. Safely ensconced in the escape pod, the scientist shows Claire three canisters containing the samples, when the pod bursts into flames and explodes upon re-entry into earth’s atmosphere, the fuselage — including the canisters — fall to different parts of the county.

As chaos breaks out in space, Davis is having fun with his favorite primate George, a rare albino gorilla. Through the use of sign language, Davis and George have a conversation that shows they have a close bond — and share a dirty sense of humor. Later that night George finds one of the canisters, it opens and sprays him with a chemical mist, the next morning Davis arrives at the sanctuary after receiving a call that something bad has happened. He finds a dead grizzly bear and George hiding in a cave, after being coxed out by Davis, George emerges and it’s obvious he is considerably larger than before. While Davis and his team try to figure out what happened to George, a woman arrives and introduces herself to Davis as Dr. Kate Caldwell, a genetic engineer who works for Energyne. She tells him that George has been infected with a gene mutating pathogen. 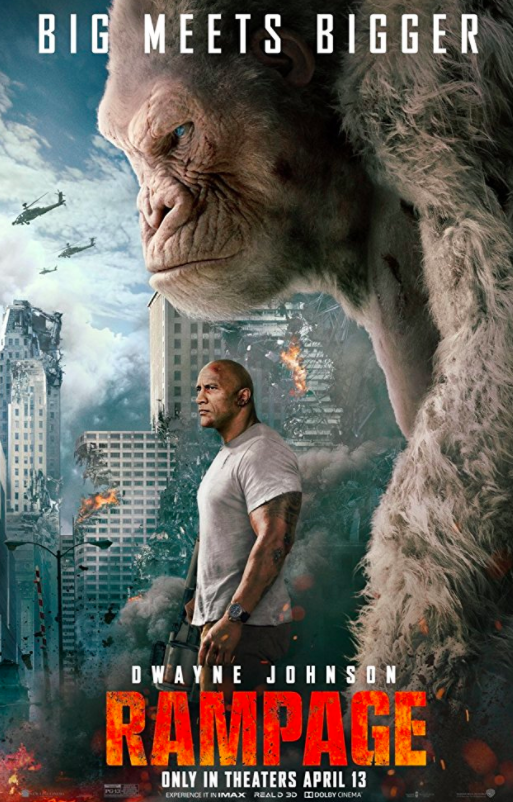 Due to his accelerated metabolism, George becomes hungry and enraged. George smashes his way out of the sanctuary, but his escape is cut short when the government literally flies onto the scene and takes possession of George. While being transported by air, George predictably breaks out of the cage he is being held in and causes the plane to crash.

After the plane crash that resulted in an enraged George escaping, Davis and Kate share a moment that was a bit awkward in its purpose. While Davis’s story of how he found and rescued George is endearing, Kate’s story about a sick brother was done many times before and to me didn’t add anything to her motivations as a character. She could’ve been helping simply because it was the right thing to do. Eventually, George and the other two animals converge in downtown Chicago and proceed to go on a rampage.

The thing about Rampage is that while there is a fair amount of action, it’s interspersed with sub-plots that don’t really add anything to the story and has quite a few typical character clichés. Claire and Brett came off as cartoonish villains. Brett is the fidgety side-kick and Claire was this close to twirling her imaginary mustache and letting out a Cruella DeVilleesque cackle, heck she even had a pet rat. Jeffrey Dean Morgan as Harvey Russell was mildly entertaining as a government agent, but his sole purpose was to provide assistance for Davis and Kate, just at the time they needed it — and with the right equipment. Apart from his tendency to lean to one side while repeatedly saying things like “Well shit”, there really wasn’t much to him as a character.

Once the animals reached the city it was full-on mayhem and I was conflicted. On one hand, it was interesting to see these animals the size of small buildings climbing skyscrapers, but on the other, I couldn’t help but be exasperated with Colonel Blake (Demetrius Grosse). Just once I would like to see the head of a military operation be portrayed as a reasonable person that listens to the scientist who actually knows what on earth is going on, rather than place soldier and civilian lives in jeopardy. That’s not too much to ask, is it?

Having directed 2015’s San Andreas also starring Johnson, it’s obvious Peyton is becoming quite adept at creating films where destruction is the main goal. Rampage is filled with interesting shots that give the audience a sense of just how big the animals are and the CGI was well done, especially when George was his normal size. But like San Andreas, Rampage is a film that doesn’t have much depth to it and only it’s Johnson’s charisma and chemistry with his leading ladies that allow the film to keep the viewer’s interest. It would have been to the film’s benefit if there were more interactions between Davis and George. A scene with Davis playing with an adolescent George would have been nice to create a deeper emotional tone.

With all of that being said, as the first disaster film of the year Rampage does an adequate job of delivering on what we could expect from a film based on a video game. When a movie starts with a giant rat attacking a scientist on a space station, you know the movie you’re about to see might be a lot of things but mundane won’t be one of them.