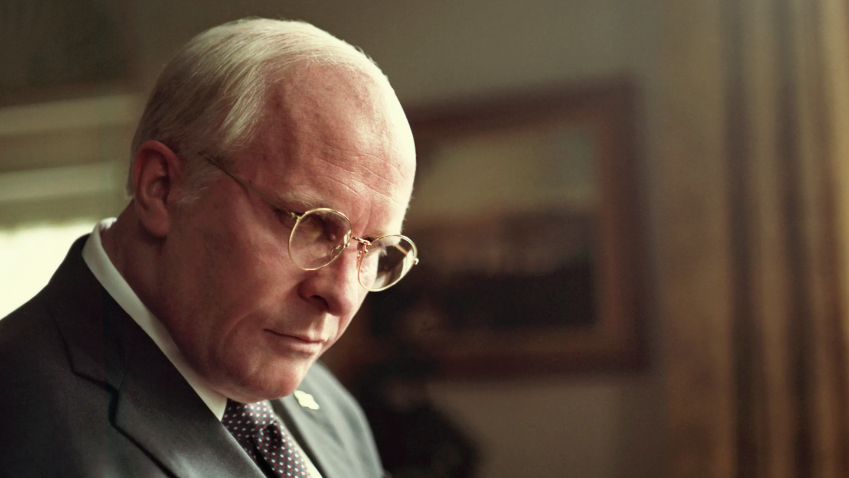 The story of former Vice President Dick Cheney is one that certainly warrants its own motion picture.  Known to be one of the most powerful men in history with an acute eye for deception. Vice tells the story of how a monotone bureaucratic VP — who we hardly noticed — came into power.

The opening titles deliver a cautionary message before the opening credits that the story is as “true as it can be given”.  This sets the tone that movie may not get the all of the facts or they’re simply embellished for dramatic purposes. Director Adam McKay’s interpretation of Cheney’s tale is a bit off-kilter from most biopics we’ve seen of political figures.

The film begins with a reckless young Dick Cheney (Christian Bale) driving while intoxicated after a night of gambling and hard partying. His vehicle swerves left and right over the roads as he continues to lose control. And he can barely stand up when he’s pulled over by a cop.  This scene serves as a metaphor for who Cheney is and how he handled his role in one of the most powerful and important jobs in the world.

The scene transitions to the day of the September 11th attacks — a day that had the most significant impact of Cheney’s entire career. As the staff huddle together in the situation room filled with anxiety, Cheney sits there calm, stoic and unrestrained.  The chaos that surrounds him at that moment is not a setback, but a setup for something that could be an opportunity. 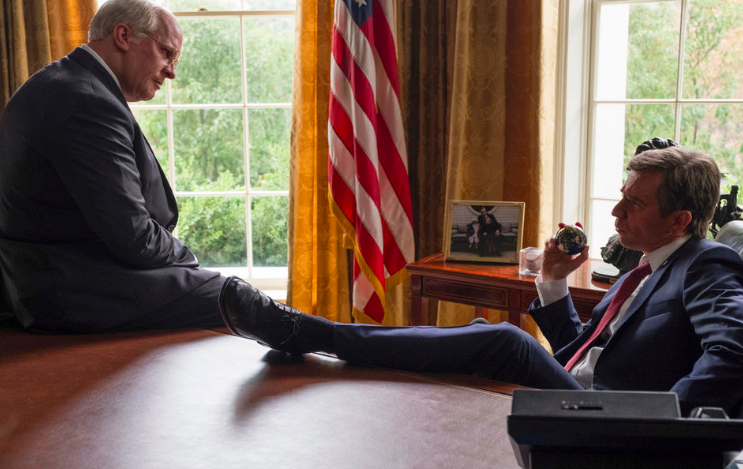 As one scene transitions to the next, an omniscient voice narrates the account of events (Jesse Plemons) and he eventually becomes a part of the story.

The narrator describes the burgeoning relationship Cheney has with Donald Rumsfeld (Steve Carrell).  Cheney, as depicted in this biopic, is smitten by Rumsfeld. He works as an assistant to Rumsfeld who is a counselor to President Nixon. Slowly the film introduces people who were the building blocks to creating the right-wing rhetoric that scrolls down the timelines of our social media feed today.

And although Vice is getting tons of love from the Hollywood Foreign Press Association leading with a whopping 6 nominations, it could have been a more compelling narrative. The stylized tone of the film with jarring cutaways used as a comedic device fails to deliver an earnest story. There is also a bizarre moment when final movie credits interrupt midway into the film, and although it appears this is yet another attempt at comedy, it just seems completely unnecessary. 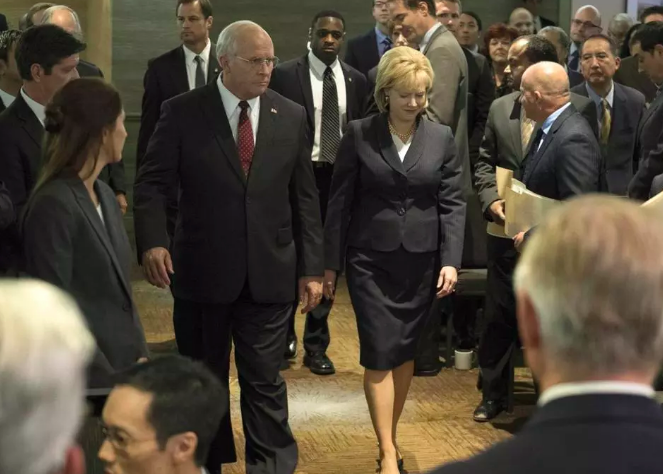 Given the weight and seriousness of Cheney’s professional life and how he handled his leadership under the Bush administration — this isn’t something to make light of or even laugh about.  I would be a bit more forgiving if this kind of campy storytelling came from documentary infotainer Michael Moore since this is his schtick, but this is not the case.

McKay seems to want to tell an authentic and compelling story but falls flat on the sarcasm and humor. Cheney’s life on its own doesn’t need color added to it, after all, this is the same guy that accidentally shot his colleague during a quail hunt and was the butt of many jokes several years thereafter.

I will add that the most impressive performance was that of Sam Rockwell who plays George W. Bush.  Rockwell didn’t do an over-the-top impersonation, but rather a mild impression of the 43rd President of the United States.

Successful multi-hyphenate Tyler Perry makes a short yet memorable appearance as former U.S. Secretary of State Colin Powell. Powell’s role in the Iraq war was one of the most regrettable moments of his career.  The film does shed some light on this and depicts the discord between Powell and Rumsfeld during their time together in the Bush administration.

Vice delivers some impressive performances, but as a narrative, there’s room for improvement. I can’t in good faith take this movie seriously because of how it was executed, but it seems I am in the minority given how well its gaining steam in the awards circuit.

Sisqó Bares It All in New ‘Thong Song’ Vice Documentary