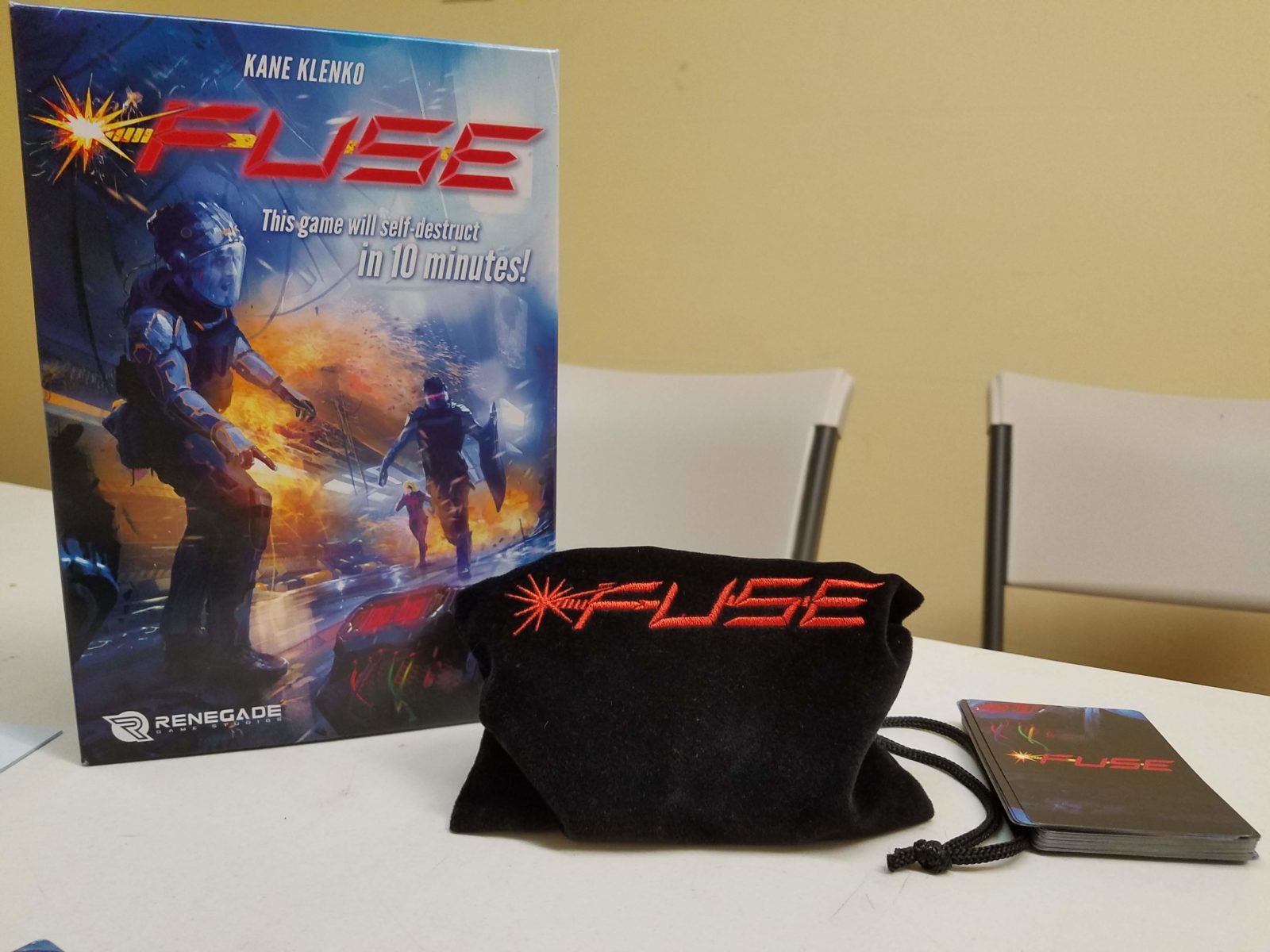 From the folks that brought us Clank! A Deck Building Game and Scott Pilgrim’s Precious Little Card Game, comes Fuse.  Released by Renegade Game Studios in 2015, this game can be played alone or cooperatively with up to five players.  The premise is that you are on a spaceship and twenty bombs have been set on board, you and/or your friends are tasked with defusing the bombs.  This is accomplished by rolling the dice and each player using the dice to complete various sequences that defuse one of the bombs.  So I know what you are thinking, “hey, that sounds cool.”  Not so fast.  You and/or your crew must do this in 10 minutes! 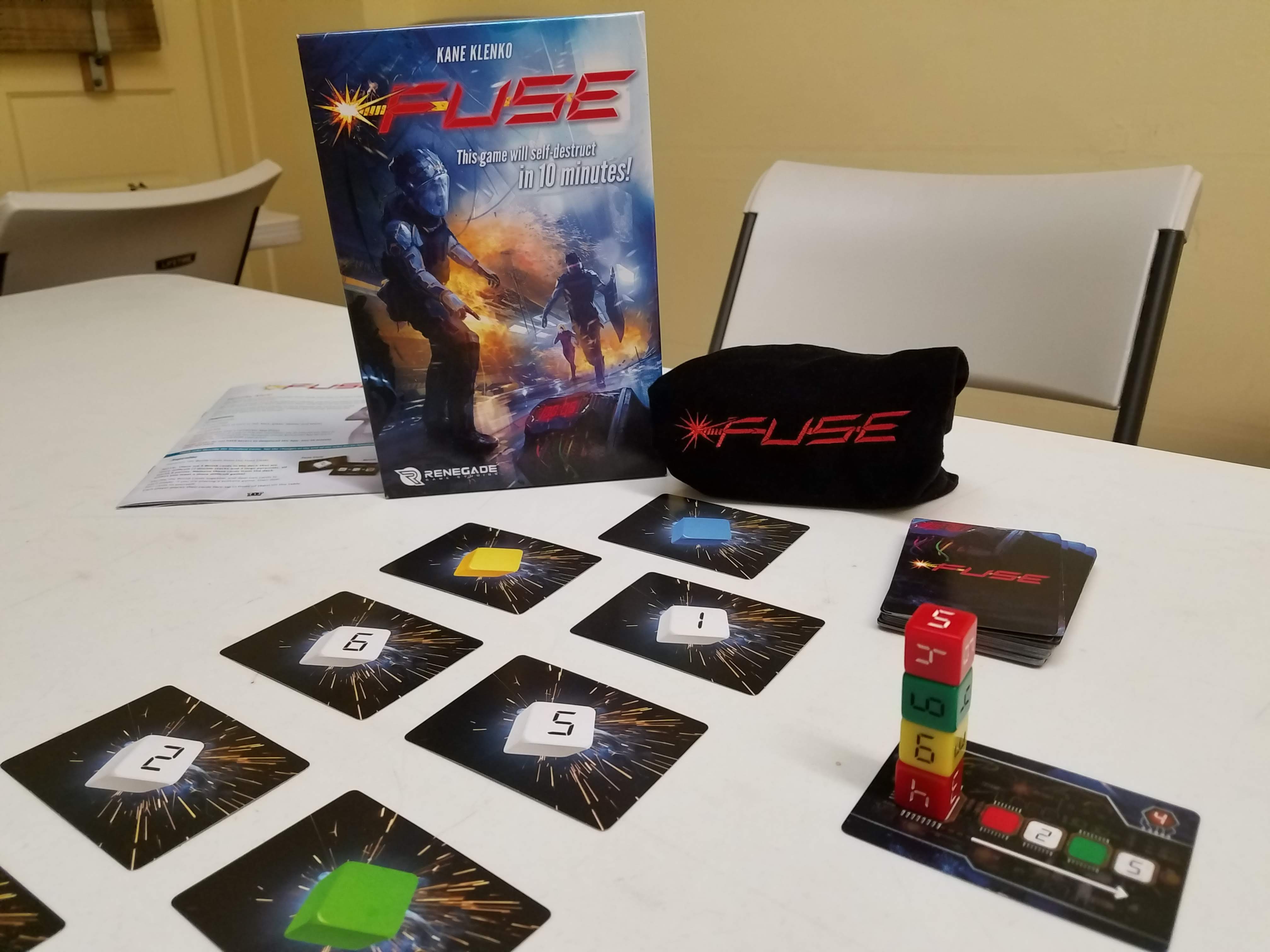 The setup is a little complicated. So, if you are having friends over, you may want to open this one in advance and get familiar with how the deck is established. In Fuse, the deck is composed of bomb cards, which are used to defuse the bombs; and fuse cards, which cause one die to be removed from one of each player’s cards should it match one of them (i.e. removal is a maximum of one per player).  The number of cards in the deck is dependent on the number of players, but always includes at least six fuse cards (i.e. six out of the eleven, not all of them).  The number of cards is also used as a skill multiplier; so as you get better the game can get harder, not that it needs to though.  In the top right corner of each bomb card is a number.  This number can be used to judge the difficulty of completing it.

Additionally, when playing with three or more, the number of die is equivalent to the number of players.  To win, you must defuse all the bombs in what I will call the card pool.  The card pool is made of five bomb cards, which is replenished by your deck, each time a player defuses a bomb and draws a new bomb card.  Except for solo play, each player will always have two bomb cards to defuse.  For solo play, you will give yourself four bomb cards. So I could continue to basically recreate the rules, but I recommend that you watch the video for gameplay and setup.  For me, after playing seven or so matches, I don’t think I got the setup quite right.  I either had the wrong number of fuse cards in the deck or we didn’t understand how to properly resolve the fuse cards.  Hopefully, you are seeing a pattern.  In the instructions, the treatment and proper resolution of fuse cards are discussed; but I believe could use an upgrade.  However, like many games, if you want to just watch the gameplay video on YouTube, that will probably avoid our folly.

I played this multiple times with different players, all at the same difficult stage, along with my ever-evolving understanding of the rules.  My first round was with three individuals.  The bomb card mechanics were easy to understand and we worked collectively, but slowly, to defuse our bomb cards.  We were likely stymied by misunderstanding that you only had to remove one die per player when resolving an unused die or fuse card; but based on how many cards we had left in the draw pile, I’m not sure it mattered.  The trio played two more times, and each time we had a better understanding and worked better collectively.  Coming out of the multiplayer experience, I was convinced that I could do better alone!  So, I played again, but this time with two players.  The mechanics for two players are closer to the solo rules than three or more.  Each player gets two bomb cards to defuse, but there are four dice pulled and each player gets to select two dice to resolve a bomb card. 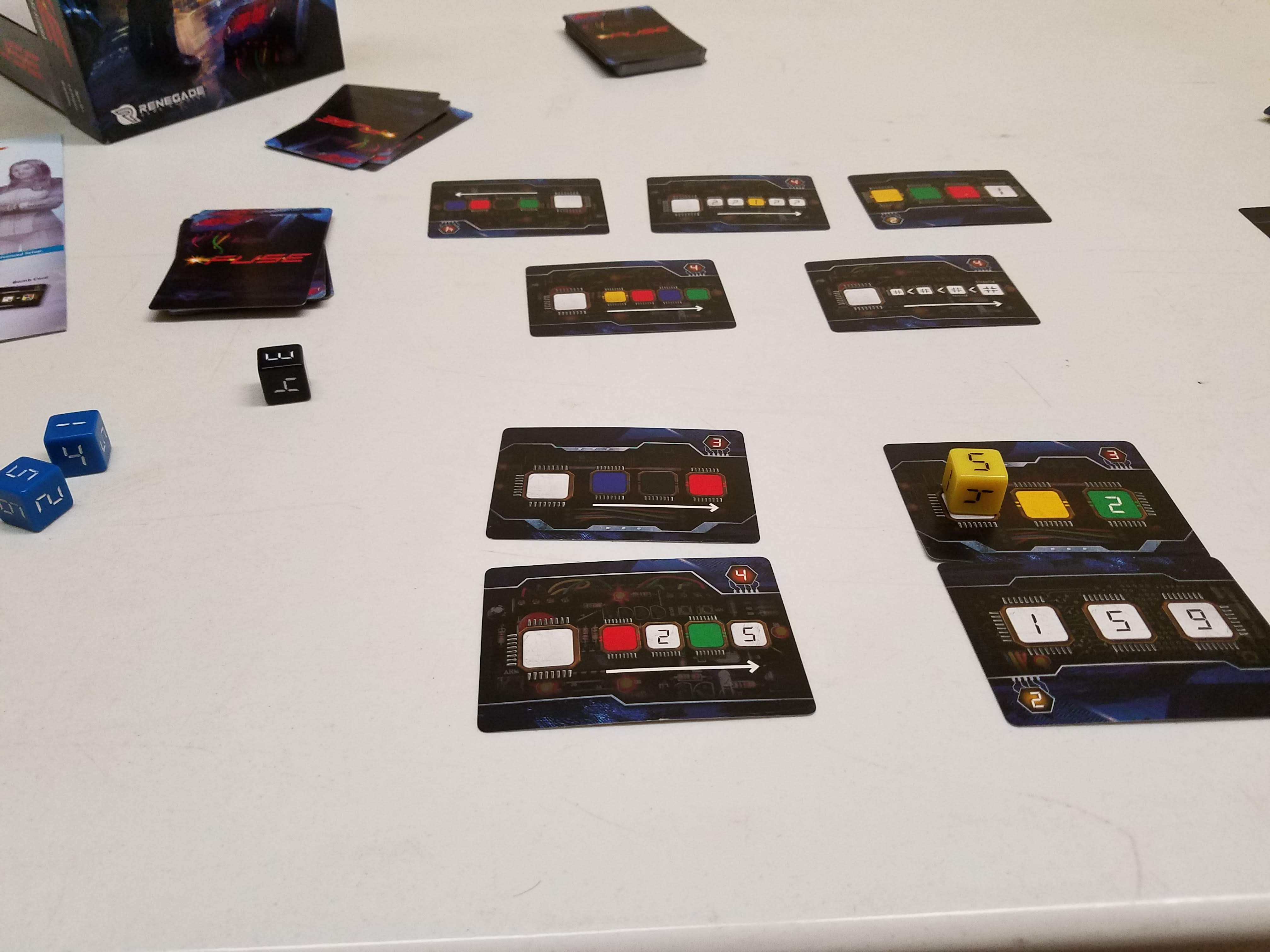 Having tried with a varying number of players, it is hard to decide which is better: playing solo or with multiple players.  When playing solo, it feels very much like playing solitaire with dice while being timed.  With multiple players, the better everyone understands the mechanics naturally, the better it goes. However, there is strategy needed in both communication and bomb card selection with more players.  The age range is ten and up; and for folks that are competitive players, I believe the age limit is appropriately set.  However, the mechanics of the game include the concepts of color recognition and fundamental math concepts, such as greater and less than, as well as adding.  So this may be a good game for our younger game enthusiast.  However, I would recommend extending the timer with younger players (and some “refined” adults), as well as hiding or not using a timer for those with developmental issues, where the timer could be severely distracting or disturbing.

Renegade Game Studios’ Fuse is a quick-paced, fun-packed cooperative game.  The seemingly simple goal for this dice, deck building game leaves you scrambling.  This one is also addictive.  The 10-minute time limit makes this perfect to entertain your guests who show up on time and allows the fashionably late to get in on the fun as well.  The ability to vary the difficulty, also adds to the fun, as that clock casts an even longer shadow over your play, as the difficulty increases.  So take ten minutes or so and accept the challenge to save your crewmates in this great game.  The only thing between survival and total obliteration is Father Time and Lady Luck, and both of them are renowned for being particularly fickle.  Fuse is available from Renegade Game Studios, your local comic/game stores, and various online outlets for around $30.

Deal Me In, Teach: Fluxx – BGN Board Game Review