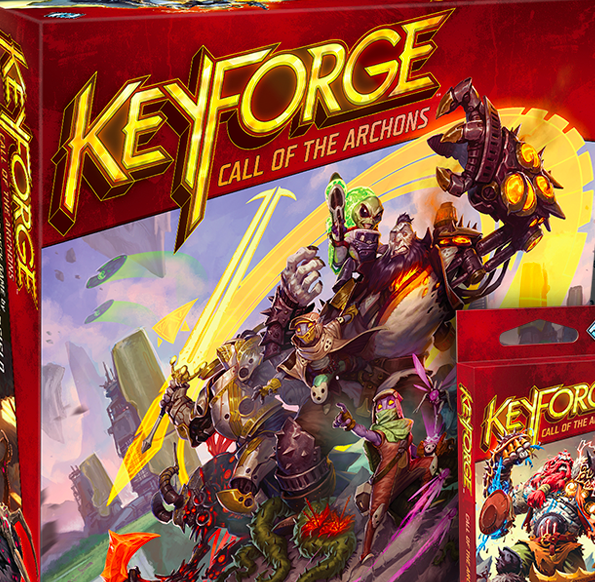 Released on November 15, 2018, by Fantasy Flight Games, comes Keyforge: Call of the Archons, a game from Richard Garfield (Magic the Gathering, King of Tokyo).  Keyforge is a two-player game, where each player has a deck of 36 cards. Each deck is unique and is made up of randomly generated cards from three of the seven available Houses.

The intent of the game is to gather Aember that is used to forge keys.  Whoever constructs three keys first, unlocks the knowledge of the Crucible and wins the game.  The types of cards will be familiar to those who play Magic the Gathering. There are creatures, actions, weapons, upgrades, and artifacts.  The creatures can be enhanced or stunned using the power and stun cards and hits use -1, -3, and -5 counters. There is a chain counter that is used to balance stronger versus weaker decks or punish a player for inappropriate conduct.

The use of the Aember, keys, hit points, power and stun cards, means that you pretty much need to buy the starter kit as they are currently not available by Fantasy Flight Games independent of the cards.  However, this is America, so some resourceful entrepreneurs have already photo paper or 3-D printed, gone to the hardware store, or whittled their way into some nice replicas. 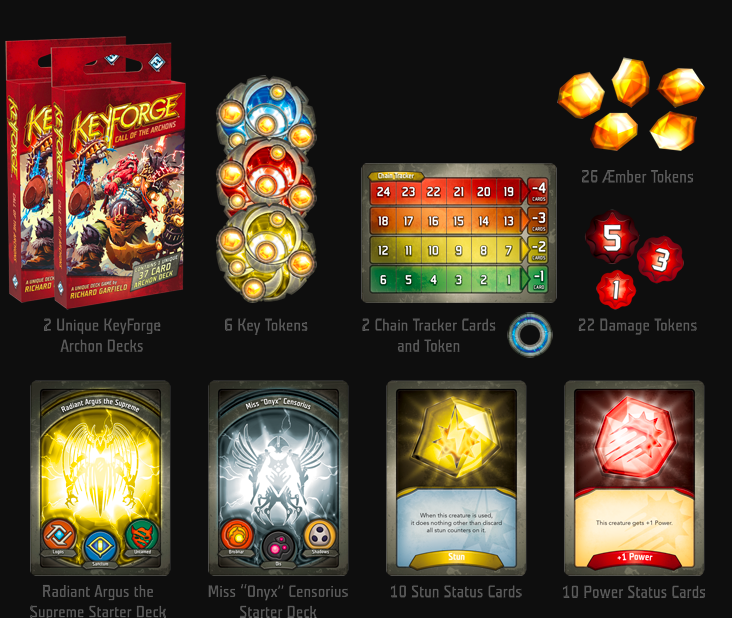 So if you’re new to card games or never played Magic the Gathering, I recommend that you start playing using the starter kit, which comes with the cardboard extras.  For the holiday season, finding the starter kit can be difficult and stores are cashing in by increasing the price due to the low supply. The starter kit comes with two starter decks, the counters, power and stun cards, Aember, and then two of the unique decks.  Unlike Magic the Gathering, the idea is preventing someone from paying their way to the holy grail of decks. There are several means employed to do this. Fundamentally the fact that each deck is unique and complete, prevents the need for single card collection and purchases.  The publisher used a random card generator, which they boast allows for over 104 quadrillion possible decks.

However, there are apparently still some holy grail, Black Lotus-like decks that are already being traded online, so if you’re are really competitive happy hunting.  Additionally, the creator has added what I perceive to be a deck leveler by the use of the concept of a chain. Chains provide an equalizer by assessing a penalty on a deck that is particularly strong or a player who is rude, etc. The more chains, the less number of cards that are allowed in your hand (normally six). They are also sometimes invoked for use by the cards so keep an eye out. Now I know you are asking, how do you know whether you have a particularly strong or weak deck?  The Keyforge Website allows you to register your decks, through a cover card included that has a QR-code and an itty-bitty number that you can enter and register your deck to see the statistics regarding decks of similar configuration, or so it seems. The register function is still in beta at the time of our review.

Through a particularly good Black Friday of shopping, I found one of the elusive starter sets and played a round with the two training decks Miss “Onyx” Censorius and Radiant Argus the Supreme.   Like any good training deck, it includes instructions on how several game processes are played. My deck Miss “Onyx” Censorius contained the Houses – Brobnar, Dis, and Shadows. The Radiant Argus the Supreme deck contained the Houses – Sanctum, Logos, and Untamed.  While the character cards in Radiant Argus mopped the deck with my creatures at almost every opportunity, slow and steady wins the race. My deck was full of ways, sometimes upon the death of a creature, to take Aember from my opponent. So my strategy was to sacrifice many battles to secure the Aember for my keys for the win.

Now it should be noted that the arrival of Keyforge: Call of the Archon was slightly marred due to an unfortunate issue with the naming for certain cards.  The problem with random generators is the randomness. For Fantasy Flight this resulted in some controversy where there were discussions about cards with names like “Titanflyer, the Farmer of Racism.”  Fantasy Flight responded responsibly and indicated that they will replace any “defective” deck with two appropriate ones. Seems more than reasonable to me.

There is a lot of debate about whether to buy the starter kit.  For those who game a lot, it may not be worth the extra $20, as you basically get just the cardboard stuff, plus the power/stun cards, but it may be easier for tournament play if you do.  The tournament rules allow substitutions but do not allow the use of a die. Given the cost of a deck, around $10, I believe tournaments are going to be a bit pricey, but we will see. The current tournament rules outline two modes of play –  Archon and Sealed. In the Archon mode, you are allowed to bring your own decks. At a sealed event, the deck is opened before each match and some timeframe is allowed to view your deck before the gameplay begins. 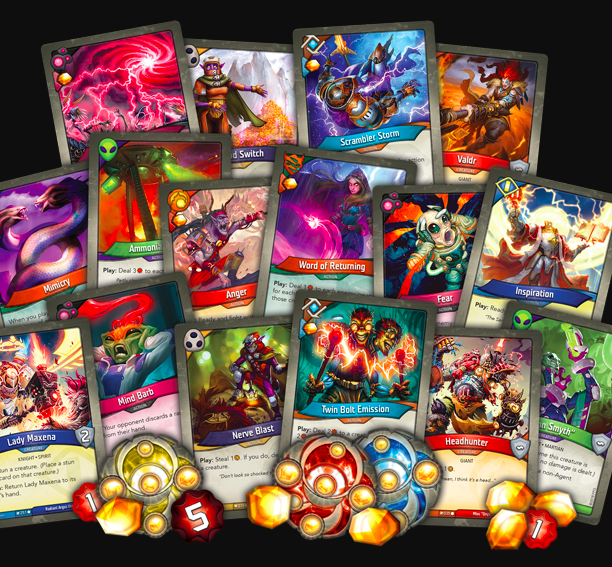 For the most part, I found the cards easy to understand and I greatly love not having to worry about the complication manna tended to bring to the success of my Magic decks.  Although difficult to find in stock, I am sure the demand will reduce after the holidays. However, if you are still looking, I would advise you go to the horse’s mouth at Fantasy Flight Games and buy direct. You will likely save yourself some money and aggravation.  The game states that is for teens and above, if you have a child that is Pokemon or Yu-Gi-Oh savvy, they will be just fine playing this one, although you may want to read the rules through with them a time or two, and it their case highly recommend the starter kit. If you already purchased this for your friend or loved-one or are still considering, Keyforge: Call of the Archon is a good option for players of all gaming skill-levels.

If you haven’t quite started or finished your Christmas shopping yet, this is one to add to your list!