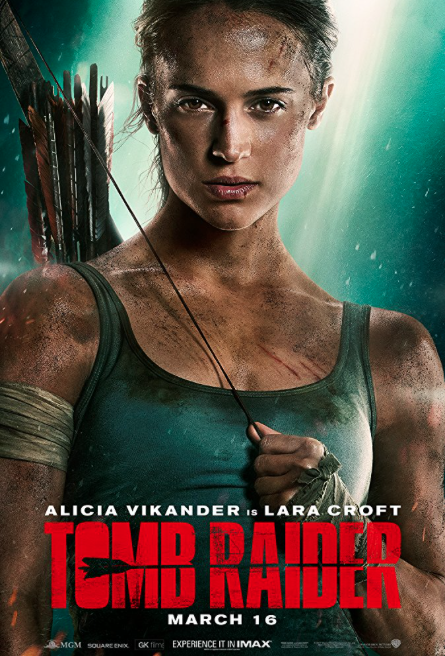 Walton Goggins is known for his intense face, with the piercing stare of a man who’s seen too much. To come upon him in silence is to encounter very dark eyes. If you’ve seen him perform as any number of villains you might bring some preconceived notions about the actor, but the minute he opens his mouth, his soul betrays his face.

With an accent somewhere between the rolling sweetness of the deep south and a Midwestern twang, he’s one of the few men I don’t mind calling me darling. The character actor lamented earlier in the day that he didn’t have a face that would launch a thousand ships. After talking with him for ten minutes, I’d be willing to fight anyone unwilling to recognize his greatness.

In Goggins’ latest film, Tomb Raider, he plays Mathias Vogel. Vogel is a man marooned on an island, unable to leave until he completes his task. After meeting once briefly at the press junket for the film, Goggins and I spoke about his love of characters, working with Norwegian Director Roar Uthaug, and his upcoming role in Ant-Man and the Wasp.

Walton Goggins: Hi, dear. How are you doing?

Joelle Monique: I’m wonderful. How are you doing?

Walton: Wonderful? That’s a lot to live up to. I don’t know. How about mediocre? How about just passable? How are you doing?

Joelle: [laughs] We’re just going to be honest about the day? Ok. I’m hanging in there. You’ve had a really long day.

Walton: I’ve had a long day. Yes, but all in the service of something good.

Joelle: Let’s talk about that something good. You’ve been in a crazy amount of good roles. You were Venus Van Dam in Sons of Anarchy, Stans in Predators, and Clay Hawkins in Lincoln. Now, you’re playing Mathias Vogel. Were you a fan of the game or the original Tomb Raider film starring Angelina Jolie? 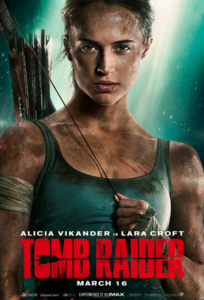 Walton: No. I never played the game. It missed my time. I stopped playing games after Pitfall!. I’ve never seen the movies. When this opportunity came, I decided not to experience the game or the movies. I didn’t want to be influenced by the mythology of Lara Croft. I figured there were enough people around on set who would know exactly what to do. I wanted my experience to be pure.

Joelle: What drew you to Tomb Raider? What made you want to be Mathias?

Walton: Based on the merits of the story itself. I thought it was an unbelievable journey that this young woman takes as she’s stepping into her power. I found in Mathias an opportunity to unearth his sadness. I saw him as a real 3-dimensional person. I concentrated on what his life had been like up until the point the audience meets him. I wasn’t sure Roar would go for it, to be honest. We met over Skype, [and] he told me that the way I saw Vogel was exactly what he was looking for.

Joelle: That cohesiveness comes across on the screen. Can you talk a little about developing Vogel? I haven’t had an opportunity to read the script, yet. In the film, all we know is he’s trying to get back to his kids. What did you add to the character?

Walton: I just built him on that concept alone. Vogel walked out of his home and said goodbye to his wife and his two little girls. He probably said, “I’m going to be gone for a year. But, while I’m gone, I’m going to be doing something incredible. I’m going to make a discovery that is going to be very important to the world.” Then he left. That year turned into two years and five years and when he looked up it had been seven years.

Somewhere along his journey, he becomes hopeless. Eventually, he surrenders to the futility of his mission. He’s isolated and alone. Then, all of a sudden, this person appears. Croft is the only person in the world who may have the answers to what he’s looking for. I thought to myself, “Wow. That’s interesting. What an interesting way to start a story.” I felt it was all in the script Geneva Robertson-Dworet wrote. In addition, I’m such a huge fan of Alicia Vikander and what she does. I was excited to dive into the role.

Joelle: Alicia got ripped for this film. Those who follow her on social media were able to watch her transformation in real time. Of course, the poster is also very impressive.

You’re a fan of hers. What was it like to square up against her? You guys do have a fight. We won’t say when or where that fight takes place. Can you talk about what it was like to fight her?

Walton: I knew Alicia. We have some friends in common. Over the course of making this movie, we became really good friends. By the time it came to film those fight scenes I wasn’t afraid of hurting her, or her hurting me. We were worried about what we needed to experience emotionally to make that fight work. There was a lot of anger and a lot of hatred. I wasn’t looking forward to clearing that hurdle. Once we got into it, that’s where all the magic happened. It was exciting to see her transform. We were in training for four months. This was the payoff. 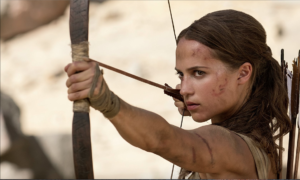 Joelle: She’s incredible to watch. You two really pulled off that fight scene. Roar is kind of known for these big, intense, action films. How does he bring that intensity to set? Is he an in your face kind-of director or does he trust he trust his actors to get the job done?

Walton: I’d seen The Wave days before I received an offer for Tomb Raider. I thought, “Wow. Who is this guy?” Roar had made such an incredible film on such a small budget. The way he chose to show the tsunami, he made it cinematically interesting. Then the phone rang. We had this conversation and Roar was so specific about what he wanted. He’s such a lovely, kind, and gentle person. He’s motivated by the heart of a situation. I hope it comes across in our movie. I think the world of him.

Joelle: It definitely shows throughout Tomb Raider. Without spoiling anything–these are all moments from the trailer–the plane is incredible, just watching you guys run around the forest is thrilling, to say nothing of the tomb itself.

I can’t let you go without asking you about Ant-Man and the Wasp.

You’re playing Sonny Burch, Director of Acquisitions and Logistics of Cross Technology Enterprises. This is a weapons manufacturing company contracted by the United States. Burch is usually an Iron Man villain, and I was surprised to see him in Ant-Man and the Wasp. Can you tell us anything about how you’ll be playing this role? Because physically, you’re much different than the comic book drawings we’ve seen. Have you been reading any comic books in preparation?

Walton: [Laughs] You think Trinity is bad? Marvel is bad. Marvel is everywhere. I’m not at liberty to discuss many of those things. Suffice to say, Peyton Reed and I had a number of conversations about who this guy is and how he fits into this story. I don’t know that we were bound by just one interpretation of this guy. He could be a number of things. I think we settled on something the audience will dig.

Joelle: Looks like time is up. Thank you so much for speaking with Black Girl Nerds today!

Walton: It was a pleasure darling. Be talking with you soon.