The short film, Nuuca opens with an undisturbed landscape: grass from here to the horizon, sunlit with dew. When a human voice arrives, it remains off-screen. The young woman–speaking in Hidatsa–tells us something that goes without subtitles for non-speakers. Then we hear a voice speaking in English. She tells us about her childhood. It was a safer time because “everyone took everyone as their relative.” But those halcyon days have gone, lost to more than the typical experience of adulthood. The 13-minute film, directed by Métis/Algonquin filmmaker Michelle Latimer, explores this loss and the catalyst behind it. 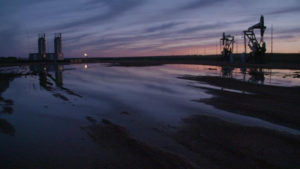 In 2006, a new oil field was discovered below the Fort Berthold Indian Reservation. Though there had been drilling in the region for decades, the discovery created a boom. Oil wells proliferated and oil field workers set up in “man camps” for the swell of jobs. Damage to the region was inevitable. As Dr. Rick Ruddell explained in an interview with The Intercept: “It’s a slam dunk that crime goes up whenever there’s a boom town, pretty much no matter where it happens throughout North America. You get this influx of young people, primarily male, into small rural communities and they just disrupt everything.”

This disruption, according to Nuuca, has meant that the population in Fort Berthold has doubled and violent assaults against Indigenous women have almost tripled. Media outlets have framed this violence as a matter of numbers, or as immoral behavior, lumping it with criminalized actions such as drug use. But the violence is neither discrete nor novel, and Latimer agrees that historical contexts are useful in looking at what’s happening.

At the outset of the colonial project, Indigenous women were targeted in specific ways. As Latimer explains, “there was intermarriage where [European settler] men would strategically marry [Indigenous] women who had land rights. There was rape, which violated women outright. And if you look at an attack like Wounded Knee, it was an attack on women and children to eradicate the very life that would perpetuate our society.”

What Nuuca makes clear is that the violence committed against women cannot be separated from the extractive relationship that oil companies have with the land. Individual perpetrators are completely absent from Nuuca. In their place, Latimer posits rigs and tanks — overwhelming machines that point to the structural nature of the violence.

Each of Latimer’s short films is a conjoining of the stylistically subtle and unambivalently political. Her award-winning short, Choke takes on the matter of suicide amongst Indigenous teens. In The Underground, “an Iranian refugee experiences North American life by imagining himself as a cockroach, the only living creature that will survive after humanity perishes in the apocalypse.” Latimer’s short documentaries, whether speculative or realist, use a singular voice to speak to collective experiences. NUUCA, being the most recent might be considered a return to this approach.

Just prior to filming this latest short, Latimer spent several months traveling the Americas, documenting Indigenous resistance movements. She was working as showrunner, director, and writer for the Viceland docuseries, Rise. It was an experience which she describes as fast, intense, and journalistic–one that encouraged her to approach Nuuca in a “more meditative, more based on an image, and more poetic” way.

This stylistic decision is vital. So often narratives around the violence that oppressed people experience are depersonalized–rendered in extremes–either lumped invisibly into numbers or made into spectacular cases. For Latimer, choosing intimacy over sensationalism was about accessibility. “Yes, there’s always the threat of extreme violence,” she says, “but what about the everyday threat? The little things like a catcall out a window–things that I don’t think we think about because they’re not quote-unquote newsworthy.” 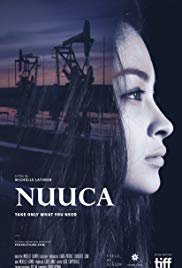 At the end of Nuuca, we again hear the young woman’s voice, speaking in Hidatsa. After all of the intrusion, English-speakers are offered a translation: “Take only what you need.” The statement is an assertion — an opportunity to institute an Indigenous and pre-consumptive approach in our relationship with the Earth. But the translation is a reminder that so much has already been lost.

When asked about the importance of art in the larger project of self-determination, Latimer responds: “We had our own societies and our own laws and our own nations and those are not recognized today in the same ways that they were. And so [sovereignty] is not about recognition within this mandate but about revitalizing our own society. I think that in order to have sovereignty, you have to have a sovereign narrative; you have to have sovereignty over your stories.” For people who have experienced genocide, “narrative sovereignty is very much tied to this idea of survival and sustenance.”

You can also watch NUUCA at The Intercept.

Nina Yeboah is a reader, writer, and cultural worker. She lives in Chicago, IL.