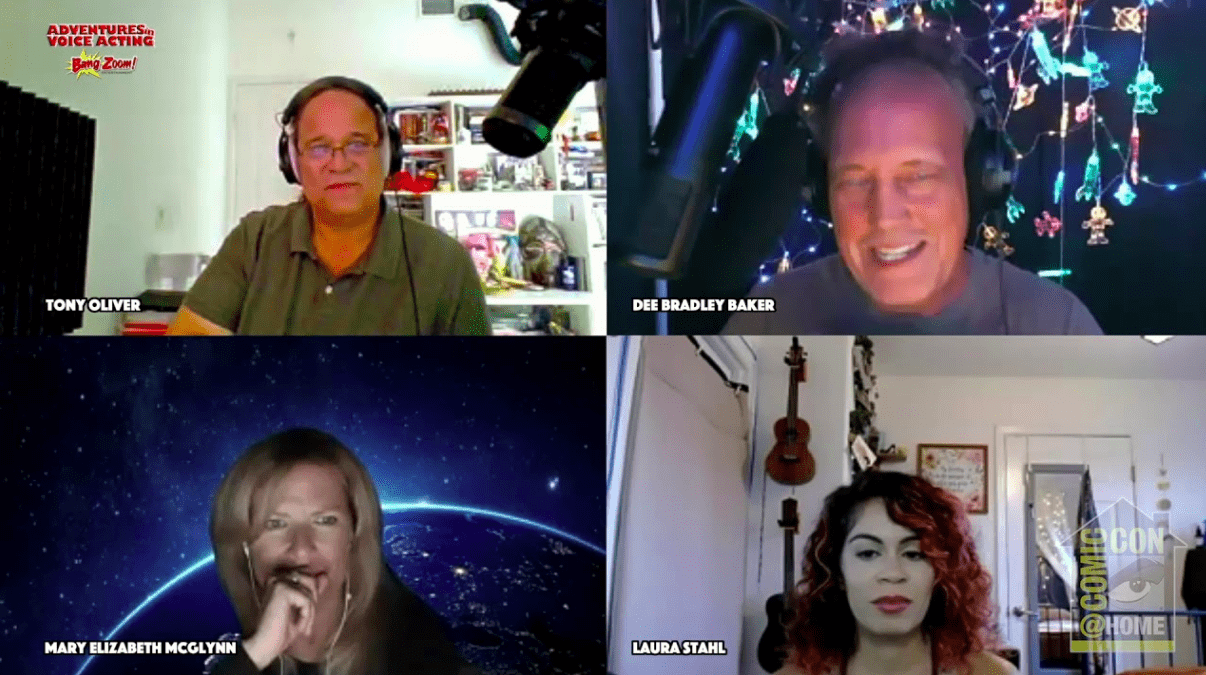 BGN was able to hop down the rabbit hole into the notorious voice acting world in a special virtual Comic-Con panel called Inside the Voice Actors Studio.

Hosted by Tony Oliver (voice director and actor) and joined by Dee Bradley Baker, Mary Elizabeth McGlynn, and Laura Stahl, this panel discussed the essentials that new actors are required to know as they launch their careers into the industry, as well as what kind of experiences they can expect along the way. The panelists also touched on the effects of the recent shutdowns and industry changes occurring due to the pandemic, social unrest, and shifting paradigms. It was truly informative as well as entertaining.

Advice on How to Get Started as a Voice Actor

Baker started off the panel very honestly telling viewers that the first step to becoming a voice actor is to love acting in the first place. He said that in addition to loving it, “You need to make it a habit, be good at it, and test yourself until you’re ready to move up [to a professional level].”

He explained that it’s important not to think about it in terms of finding one’s big break, but rather, exploring creative defaults.

If opportunities to do voiceovers happen, he suggested that people work from there to get better. He was keen on explaining that this process takes time. “You have to have the groundwork before you start doing it professionally. You have to dig into yourself and find it. Just because it appeals to you, doesn’t mean it’s right.”

Oliver, seconding this thought, mentioned, “Voiceover embraced me first, not the other way around.”

They wanted audiences to understand that it’s truly a matter of fitting into the very small community of voice actors and understanding that. Not everyone does.

McGlynn added that for her, voiceover was an unexpected route. She had been a television actor first but messed up her knee to the point in which she couldn’t continue screen work. In a sequence of unplanned events, she ended up getting the opportunity to start to dub anime. She emphasized that the important thing about voice work is knowing when it’s a good fit and understanding one’s self before trying to pursue it. She knew she wanted to act before doing voiceovers, so she did it, not the other way around.

Stahl, newer to voice work than the rest, expressed that she tells people that all of their ideas about success have to be flexible, especially now. She shared that she went to college for a degree in musical theater and ended up not liking it. So, she decided to experiment, try new things, and really try to find what fit her. She laughed as she said, “I stumbled upon voice acting on accident.” She never thought it’d be her career. Each of the actors in the panel echoed the same sentiment — that people should pursue acting because it’s what they love, and if they can get into voiceovers, that’s great.

The only real technical advice was to visit: I Want To Be A Voice Actor! They had a great deal of insight into the mindset that people need before trying to join this professional community.

Advice on Being Flexible as a Voice Actor

Baker shared with viewers that there’s constant disruption and change as a freelancer, especially these days. Despite the disruptions, he made a humorous comment to a fellow panelist, saying, “Who knew in 2020 voice acting would be a safe job?”

McGlynn jumped off that point by explained, “We have to adapt or be left behind.” She expounded that learning is part of the process “It’s like a fun puzzle.”

The ability to work remotely is convenient, but it also brings on many challenges for newcomers.

During the pandemic, voice acting has become a very different game. Stahl explained that being newer to the job has been interesting. She told attendees that they would have to work remotely now and need a certain caliber of equipment to record. So, they’ll need to drop some money.

There are options for do-it-yourself tools, as Stahl shared an example of her sound blanket curtains that she purchased and then wrapped around the sound booth in her home.

She also mentioned that gaining a client base is more difficult now. It helps to have a strong client base to build a safety net. Without it, there are a lot of concerns. Ultimately, trying to be a voice actor at home is a financial investment.

How Black Lives Matter, LGBTQ+, and Other Representation Play a Part

While most of the panelist mentioned that their voice acting is more about the voice not the person’s race or sexuality, there was something important said by Stahl.

She shared that there is anti-blackness not only in the voice-over industry, but the film industry as a whole. While this isn’t a new complaint that audiences haven’t heard, before with trends like #Oscarssowhite and actors of color speaking out on the issue, Stahl was the only person who dared to call it out in this panel of predominantly white speakers.

Stahl shared that she has the privilege of passing as a white woman but is actually Black and Jewish. She advocated for not just more Black voices in the industry, but also more Black directors, producers, showrunners, and people pitching ideas.

She also mentioned that no one sounds inherently “Black” or “white.” It’s the perceptions of certain vocal qualities that make people categorize others into specific ethnicities. She implied that the industry should break away from those tendencies.

With the newest waves of Black Lives Matter protests around the world, many Black people are looking for opportunities to hold various industries accountable for their lack of representation and reliance on type casting Black people and people of color. Black people aspiring to join the voice acting world are still wondering how to even be considered for a seat at the table.