William Shakespeare questioned whether a rose by any other name would smell as sweet. I am sure there are thousands of research papers by sociologists and English majors expounding on the conundrum proposed by the not-likely-a-real-person bard.  Well, some smart people took the question to heart and put some science on it. Fundamentally, Nerd Words is similar to playing hangman with words instead of letters and with an actual timer vice a number of guesses construct (i.e. the different parts of the hangman). 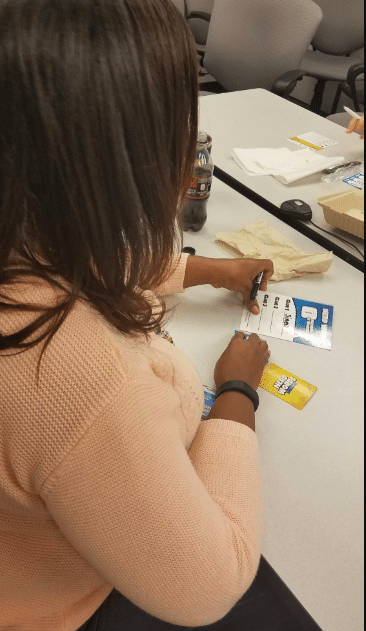 The game uses a deck of cards with three scientific terms on them and several game whiteboards to either allow guesses by a team or for the clue giver to provide a single word clue.  Each player receives two cards (unless you are playing with eight or more than give each one). Divide the players into even teams (as best you can), and the last person to have worn lab goggles starts.  One word is chosen off the clue givers card.

The clue giver indicates on the whiteboard whether the clue consists of one or two words and then provides a one-word clue, which starts with any of the letters in the word(s) except the first letter.  The first letter can be used on the last attempt. During each attempt, both the clue giver and each of the teams bet to determine whether they will get the right answer. Points are awarded to the team that gets the clue right and to the team the clue gives belongs.  If the bet is wrong the team loses the amount bet. Each attempt has a one-minute timer. 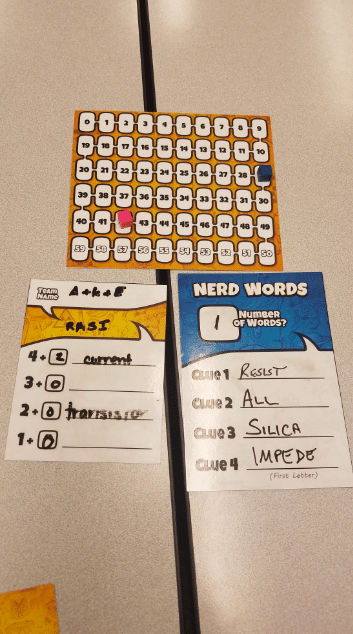 Straight out the gate, no one should run out and buy this for their middle-schooler with a penchant for science.  If you are an advanced placement physics or chemistry teacher, this may be useful. However, to be honest, this game is for science nerds.  You know who I am talking about, the white-socks-black-shoes crowd; the folks that subscribe to the NASA channel, not Animal Planet.

My gaming group consisted of six individuals, five were engineers, and one was a chemist with a Ph.D.  Now I admit this may be why the game seemed so hard, as engineers have a vocabulary of highly useless words to most. Many of which, they and I apparently can’t spell, but we all knew what we meant. Fortunately, for those of us who hit the delete button right after our chemistry final, the term cards provide a definition of the term. Naturally, it is rare that you can use any of the descriptions as a clue. 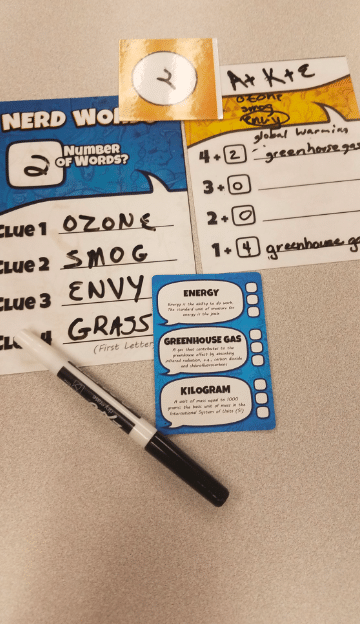 During our match, we originally had five players.  This was odd (pun intended) and made the gameplay a little weird as the team with two players, would have only one guesser.

Fortunately, our sixth player arrived and a balance was obtained. Initially, my team was wholly overconfident on our betting regarding our guesses, which quickly put us on track for a historic whooping of our collective gluteus maximus.  A little more conservative approach and some single clue guesses got us back in the running in no time. The instructions suggest thinking ahead so when it is your turn you can jump right in with a clue. I recommend this highly as there is nothing more fun than seven nerds watching one nerd trying to come up with a clue.

Also, it felt like you should have a dungeon master screen or something so you can ponder in private, but I guess group nerd ridicule could be considered part of the fun. My group really wished that there was also a category for the clue given all the various scientific terms that we could come up with that are a single word and the clue given is “resist.” After a bit, a clue giving philosophy emerged, which I will not share; but suffice it to say you get four chances, to get them to guess your term.

All-in-all, this is a really great game to brush up on or increase your STEM vocabulary; but I am not sure our liberal arts friends would have as much fun.  Regardless, this was a good use of about an hour and a great time was had by all. Nerd Words was released on March 26, 2019, and if you’re interested in Nerd Words, you can find more information on their website or can stop by and visit them at several conventions including the Origins Game Fair in Columbus, Ohio and Gen Con in Indianapolis. this year.

E.Angel is an engineer and holds a BS in electrical engineering from North Carolina A&T State University. In her spare time, she works at her comic book store – Brainstorm Comics and Gaming – when she is not reading comic books. She’s a real nerd who loves all things Star Wars and Star Trek and is an avid gamer. E.Angel can be reached at e9of10@gmail.com or on either game platform as Bunnehs Sister.