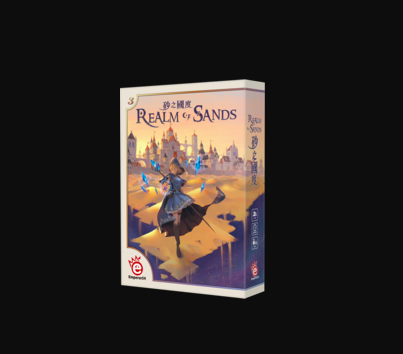 Take the mystical beauty and mythologic character of anime, add in Tetris, and put it all in a board game, and you have Realm of Sands.

Realm of Sands was released in 2018 by EmperorS4 Games and is being distributed by Deep Water Games. The goal is to arrange the tile pieces into shapes called runes with the objective to match patterns on the building cards. Each rune is composed of three tiles of various colors. Tiles are placed on a player’s board in support of completing a building card pattern. In addition to the building pattern, each building card can have an hourglass counter, an elemental spirit bonus, and/or a star point value. The game ends when any player reaches ten or more on the hourglass counter. The player with the most star points wins.

Game setup is not that complicated. There are three levels of building cards. Naturally, the higher the level, the more complex the pattern. Each level of building cards is shuffled and four cards selected and placed next to that level’s deck, resulting in three rows of four cards, for a total of twelve. Next, the 28 rune tiles are randomly placed in a circle around the building cards and the level decks. Each player will also take a Level Up Marker (wooden cube) and place it on the level tracker in the bottom left corner of the board. Increasing a level allows a player to go a certain number of spaces outside the building footprint provided on the player board. Also, the number of Elemental Spirits (discs) of each color is determined based on the number of players in the setup.

The Queen marker is placed somewhere in the circle to indicate where replacement runes are selected. At the beginning of the game, each player selects a board and three runes from the circle of rune tiles. The first time out, it was not clearly evident which side of the board was the regular side and which was for the advanced mode. It actually is quite simple: for the normal mode, choose the side without the crystal markers (no ribbon coming from the stopwatch). However, that was the most difficult thing to figure out when reading the instructions. In sequence, each player is allowed to play one rune or to place up to three Elemental Spirit discs on the player board. If a pattern on a card is completed, the player collects the card and the bonus, if any, from the card. The bonus for a card can be Elemental Spirits or a Level Up Marker wooden cube. As stated previously, the Level Up Marker allows a player to play additional spaces outside the footprint of the card. Also, on the Level II and III building cards are the timers in the form of an hourglass.

The youngest player starts first. After placing the rune tile on the player board, the player substitutes the rune pieces for the rune tile. Then a new rune tile is selected from the last two runes in front of the Queen marker. Remember that a player keeps three runes in their Activated Area and can choose to place up to three Elemental Spirits, should they have them. Typically, for the first round or so it will just be runes, until a building card is completed. Then the player who completes the card will receive the bonus and choose a rune (if applicable), and a new building card will be selected. This continues until the hourglass counters equal ten for any one player. The individual with the most points wins.

Outside of the board debacle — which side is up — the first time out my game squad found the game relatively easy with a short setup time. Now, to be fair, my squad had just come off of playing Tiny Towns, so the game mechanics and strategy aspects were fresh in our minds. However, we did at first struggle a bit with the cards as they are sort of three-dimensional and some of the asymmetrical patterns are not easy when being viewed upside down. The variant seems to add some additional capability by allowing an extra ability when a gemstone is built upon. Of course, it appears the additional capability comes at the expense of build space, but each board is unique so there’s that.

The game can be played in a single-player mode, which is similar to the multi-player. The major difference is that the game is over after 14 rounds or turns instead of ending based on the hourglass timer. The score is tallied with different titles awarded based on the tier achieved. Given the four-person limitation, this is a better game for family fun night or double-dating with your best friend and your partners. The suggested timing is right, but with more than two it will be about 45 minutes. This game is similar to Barenpark and Tiny Towns. Of the three, I like this one the best, mostly because it is more forgiving of mistakes. Realm of Sands is available in most places that sell games.