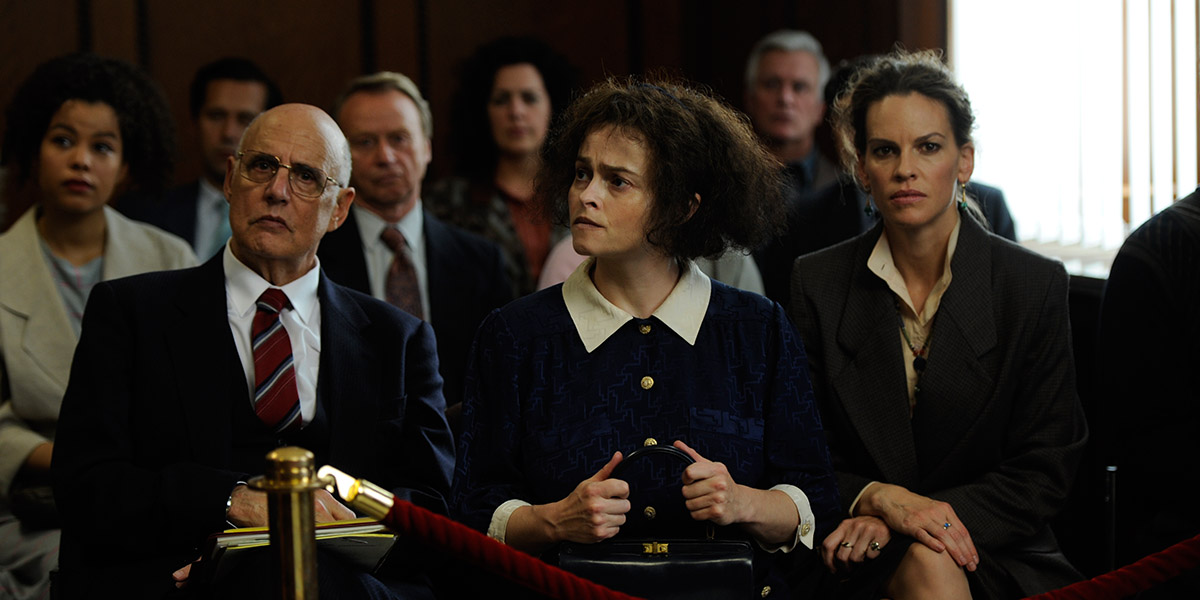 55 Steps is a heartfelt drama based on the patient’s rights lawyer Colette Hughes (Hilary Swank), who takes on Eleanor Riese (Helena Bonham Carter) as a client in a lawsuit against San Francisco’s St. Mary’s hospital. The strong performances and beautiful cinematography take me back to 1975 in the best possible ways. 55 Steps, based on true events, sees Helena Bonham Carter brilliantly portray Riese, who while living with mental illness, is also more competent than the staff around her. Riese complains that her increased dosage of meds is causing her more harm than good and giving her additional illnesses, like severe kidney issues.

When Eleanor voluntarily committed herself to St. Mary’s for treatment, she did not refuse meds entirely. The staff at St. Mary’s took it upon themselves to give her meds against her will in order to keep her in constant sedation. They leave her to unmentionable conditions and then use those unspeakable acts against her. When Eleanor speaks out not only against the wrongdoings done to her but the wrongdoings of other patients, she receives backlash from the hospital and their staff. So, she demands a phone call and gets Colette as an attorney in what feels like a matter of minutes. Colette arrives at the hospital and immediately whips the staff into place when they try to give her the runaround when she requests to see Eleanor. You know in that moment that Colette is just as firm as Eleanor.

The initial connection in their first meeting lets you know that this is the start of a very unique professional and personal relationship. Eleanor is direct with very strong opinions about everything from Colette’s hair to her age, and of course, giving her unsolicited advice on her love life. Colette is dedicated, hard-working, and compassionate but always on a time clock racing to help the next person in need. Their yin and yang dynamic is apparent almost immediately, with Colette never being afraid to tell the ever persistent Eleanor no, and with Eleanor’s uncanny ability to say the funniest and most lighthearted things to Colette just when things are heaviest.

This balance is what eventually allows Eleanor and Colette to naturally transition from legal partners to friends. In a film so heavily focused on the legal combatting of a healthcare system mistreating their patients, it strikes a perfect balance of the complexities of womanhood, the many sacrifices we have always made and what can happen when two women don’t give up on what is right and just.

Heading up their legal team is Mort Cohen (Jeffrey Tambor), who lacks the healthcare background and knowledge that Colette does, but who still has a fighting spirit. He wants to change the treatment of psychiatric patients and show a full range and positive spectrum of competency of those who live with various mental illnesses. As they continue to face hurdles in their lawsuit, they continue to break down walls and strengthen friendships. In one of my favorite moments, Colette finally opens up to Eleanor about her fears. Even though Colette spends all of her time neglecting herself and advocating for other people, this is a moment where she becomes much more human and relatable. This is a moment I wish we would have seen sooner or had layered throughout the film, especially pertaining to her love life.

55 Steps does not end on the high note that I anticipated, but it does come full circle. Eleanor, in the process of stopping the exploitation of psychiatric patients and over-medicating them against their will, also casts a new image for those who do live with mental illness. While emotionally challenging to process at times, this film truly nails its landing as a story about redemption, hope, challenging the system, and making great changes for those who are mistreated and cannot speak up for themselves.

Lost Girls vs. Lost Boys: The Case for ‘Fight Club’ on Its 21st Birthday

‘I Am Mother’ Highlights Artificial Intelligence, Human Extinction and Droids That “Mother”