Before I get started, I feel I need to clear up a few things. The Hate U Give was adapted by George Tillman Jr. (Notorious, Faster) from Angie Thomas’ debut novel. It’s not a remake of anything. In fact, the film is not like anything you’ve seen yet. It’s also not just a movie about police shootings.

The Hate U Give is a groundbreaking film about how systemic White supremacy has become so embedded in our country that it threatens the American Black family. That family must fight in order to achieve the normalcy White families take for granted. The police violence is a piece of the systemic threat. So is the drug dealing, felony records, and gang violence that plague Black neighborhoods. These things ultimately change the way family looks and functions in the Black community—but the love is still there.

In her book, Thomas stacked all the systemic threats against the family like dominoes. She arranged them like dominoes around the narrative of a loving nuclear Black family that is a far cry from the ideal image, aka the Huxtables. The audience is easily lulled as they get the “lay of the land” and begin to feel comfortable about the characters. Then, the first shock comes, toppling the dominoes and jarring the audience out of their comfort zones for the rest of the film. In a way, this approach mimics life for so many Black families. 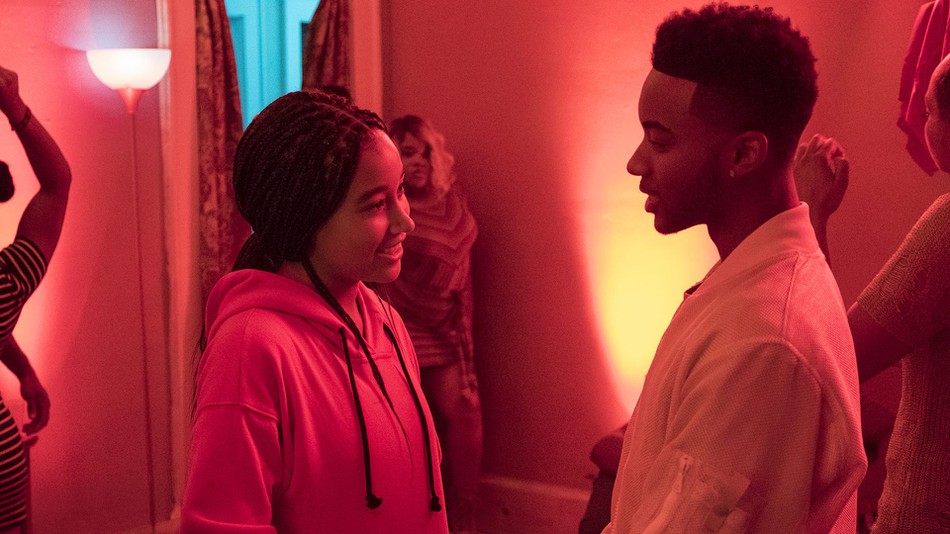 The Hate U Give is narrated by a teenaged girl named Starr (played by Amandla Stenberg) who grew up in an environment that most people would call “the ghetto”. These same people would label Starr’s father Maverick (Russell Hornsby of Grimm and Seven Seconds) “thug”. Her mother would be completely ignored as a Black woman in a service position.

Yet, the tenor of the film in those first moments, or scenes introducing the family, is not anger, rage, or violence. It’s love. The parents hug and kiss like teenagers who’ve freshly fallen for one another. Starr’s older half-brother Seven (Lamar Johnson of Kings) and younger brother Sekani (played by TJ Wright) teases and play around as if they were oblivious to the threats lurking right outside their front door. But, this is a family that eats meals at the table, say grace, support one another, and have family meetings to hash out their problems.

A Love that Everyone can Relate to

In Hollywood movies, a loving Black family like Starr’s is practically nonexistent–that’s why this film is different. As Hornsby says in an interview BGN during TIFF, “It’s actually a family film.” His words were emboldened by Tillman who takes great cinematic care in building the image of the Black American family. He does so with so many parts are universal to the audience. 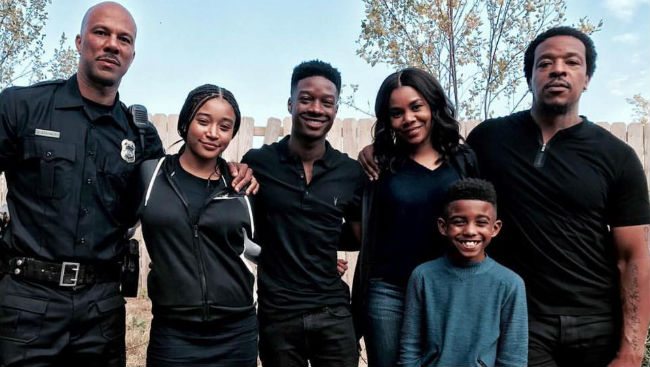 In fact, I felt that Tillman had tapped my own childhood! One scene in particular when Starr and her friend (Seven’s half-sister Kenya, played by Dominique Fishback) were at a party. The discussion reminded me of me (as Starr, the nerd in the hoodie) with my close cousins Angie and Tasha in Kenya’s place. The scenes in the bathtub with Khalil were even familiar (with my brother Rob and me). The codeswitching and duality for the white school were too real for me as well. The first love was a heart-string pull for sure.

Many people in the audience will relate to these pieces, get invested in them, and the characters involved. That’s one of the things that makes the event that changes Starr so jarring when it happens. So heartbreaking. It’s also that point where we see those superficial systems that were in place fail, but the family that is not supposed to make sense gets stronger and tighter with every obstacle. Maverick is the aggressive, angry Black man, while Lisa is his “ride-or-die.” They are not supposed to be the backbone of this narrative…but they are, and it works so well.

Another Black Girl Forced to Mature Too Fast

Starr’s interactions with her white boyfriend Chris, played by KJ Apa and her complex love for her childhood best friend Khalil played by Algee Smith complicate things even more. The audience ends up just as angry and frustrated as Starr is. 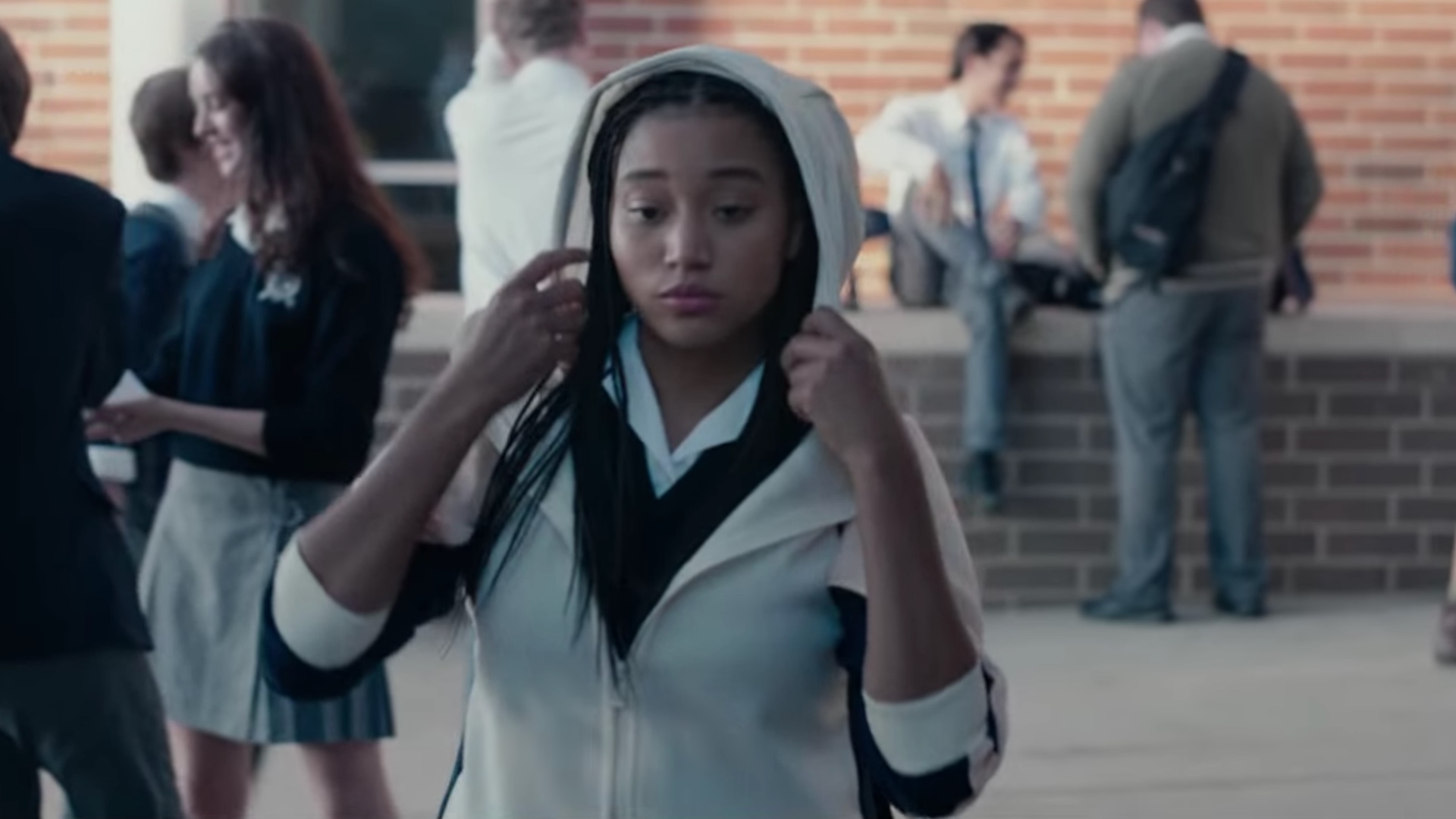 There’s another shock coming. You don’t expect it and Tillman wanted it that way. In this way, The Hate U Give is life through the eyes of a teenager, a child. There is a repetition of Tupacs credo “The Hate You Give Little Infants F%&ks Everyone,” the initials spell out “THUG LIFE”. Throughout the film, Tillman and Thomas weave in various interpretations of “THUG LIFE” until we finally see in one potentially tragic moment, what credo truly means.

The film is wholesome and heartbreaking. It’s visceral and at the same time makes so much sense. It does have a few lulls but not enough to pull the audience’s attention completely offscreen. Another thing, the violence here seems different. It is the same as in every other movie about the ‘hood, as well as in action films, and video games. However, here, it cuts deeper and jolts harder than in other films. After that, the good times seem much so sweeter, and the rage feels personal.

Because at its core, this is a film about family.

The Hate U Give premiere in theaters October 19.

When Good Cops are Still Bad Apples: The Unlikely Cases of ‘Magnolia’ and ‘Bridesmaids’