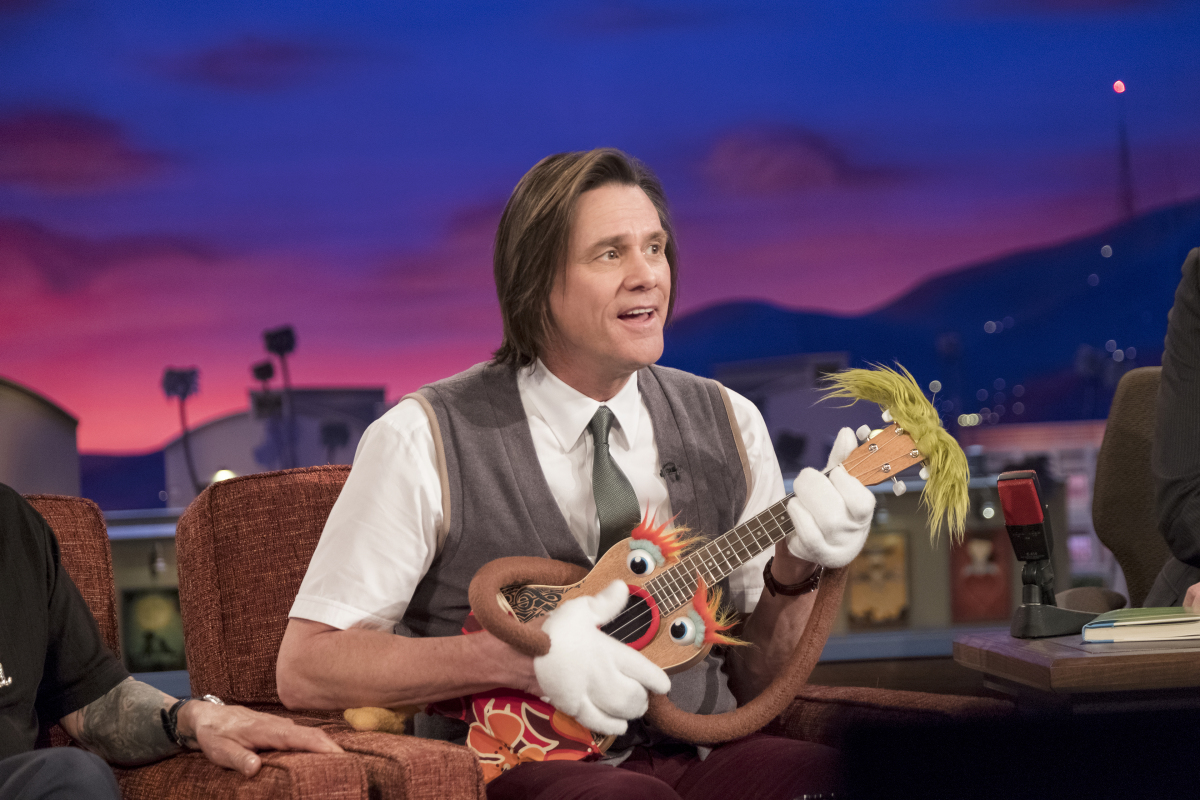 Welcome to Pickle Barrel Falls, home of Mr. Pickles and the “Puppet Time” family of edutainment. It is here in this idyllic, technicolor dreamscape where we learn about real-life things like trauma, grief, post-traumatic psychosis, nihilism, and a host of other family situations nobody has any idea how to deal with. Not even beloved Mr. Rogers-inspired Jeff Pickles (Jim Carrey) in Showtime’s dark vision Kidding.

“What does it mean to lose a thing you really want to stay?” Mr. Pickles singing-asks in his first ever show about death. Jeff’s 13-year-old son Phil (Cole Allen) died in a car accident just over a year ago, and Jeff’s life has been slowly but steadily unraveling ever since. His wife Jill (Judy Greer) has left him. He’s estranged from his surviving son Will (also played by Cole Allen), who has been taking on more and more of his late twin brother’s less wholesome qualities, including a penchant for marijuana and destruction.

Jeff’s grief over so much loss is mutating into a terrible and at first quiet anger that begins spilling over onto others, beginning with the children in Mr. Pickles’ audience when he publicly talks about his son’s death for the first time. “Puppet Time” producer and Jeff’s dad Seb (Frank Langella) shelves the episode about Phil’s death, pulling the pin on Jeff’s repressed grenade of rage that spirals further out of control with each episode of Kidding.

There are two people in this world who can make you full-belly laugh and then weep within the span of just a blink. Robin Williams, rest his soul. And Kidding’s star Jim Carrey, whose tour de force performance is unlike anything I’ve ever seen before. Alternating between kindness, fury, empathy, sadness, joy, and every other emotion in between as he deals with post-traumatic stress and grief, from moment to moment we have no idea which Jeff or Mr. Pickles we will be receiving. Every moment of Carrey on screen for these 10 30-minute episodes had me entranced and astounded by his emotional intelligence and the range of his abilities as a comedic and dramatic performer. An entire spectrum of emotion portrayed sometimes even in the very same breath. Carrey’s physicality also perfectly embodies Jeff Pickles’s pain and frustration in a way that only Jim Carrey could manage. It’s terrible. And beautiful.

While Kidding is a tale about an immediate loss — the death of Phil Pickles by an ice cream truck — it eventually reveals that grief and trauma are the foundations of everyone in Mr. Pickles’s circle of family, friends, and colleagues. Jeff’s sister Dee Dee (Catherine Keener, thankfully sans teacup) even seems to be reliving her own childhood horrors through her young daughter Maddy (Juliet Morris). Childhood traumas long live on and continue to shape the lives of these damaged adults, and the children they are now doing their best not to screw up and only marginally succeeding.

Growing up abroad I never had the opportunity to fall in love with Mr. Rogers like so many other Americans. We had bootleg VHS tapes of Sesame Street and Fraggle Rock, but Mr. Rogers’ Neighborhood never made it overseas. But I did grow up with Jim Carrey first from In Living Color and next Earth Girls Are Easy. As his career has grown like an octopus with different arms in different kinds of roles and stories, he’s one of the few constants I’ve had in my life. That he would play a beloved children’s show character like Mr. Pickles, and the fact that he’s navigating an extreme crisis, filled a void I didn’t quite realize I had. I spent much of these five hours with Jeff, Mr. Pickles, and his community alternating between tears, laughter, and growing anxiety as this newly-beloved figure goes over a metaphorical waterfall in a barrel with no parachute.

In response, Jeff’s dad begins making contingency plans for the future of the show, which include a Mr. Pickles puppet for IceCapades, a talking Mr. Pickles doll, and potentially an animated series if everything continues going pear-shaped. Which only makes Jeff more erratic as he sees himself not only getting phased out of his family but his own body and life.

One of my favorite things out of a long list I love about Kidding is how natural everyone is, even in spite of so much magical realism happening at every turn. This feeling of normalness is heightened by a diverse cast that nobody makes a big deal about being diverse. Even though each episode is only 30 minutes long, the writing is so marvelous that even bit players have three-dimensional characters, including Seb’s assistant Derell (Alex Raul Barrios) who is absolutely not just “the help, Jeff’s biracial Filipina American girlfriend Vivian (Ginger Gonzaga), and Dee Dee’s Sri Lankan American husband Scott Perera (Bernard White). I burst into tears when I realized that Dee Dee’s daughter Maddy is biracial Sri Lankan American, just like me. It’s rare to have Sri Lankans on screen in American visual media at all. And to have one who is the same mix as me in a Jim Carrey show helmed by one of my favorite directors of all time Michel Gondry (Eternal Sunshine of the Spotless Mind) has me so far in my feelings I don’t even have words for them. Some of the parallels between Maddy and my real life were so eerie if I were a narcissist I’d think someone was peering in on me to create this little girl. Representation matters. In this case, representation heals.

If you grew up on Mr. Rogers I’m sure you must have wondered how he would deal with terrible things in his personal life. Kidding gives us that perspective behind the scenes with another (albeit fictional) man who also raised America’s children. But so much more than that, Kidding is about how families cope, or not, in the face of unimaginable loss. Some want to pretend the past never existed. Some decide they will just remain there, where everything once felt whole.

Director Michel Gondry’s visual metaphors and perfectly executed magical realism is the ideal vehicle for a story about a family’s carefully maintained edges unraveling from the top down. Jim Carrey takes us on a ride through the entire spectrum of grief, as far into those dark places and those breaking points from which we sometimes can never return. It’s a tough journey, indeed. I just never imagined it could also be so funny. And sweet.