Season four of Outlander returned with Jamie and Claire Fraser in America, making their way up the southern colonies. Caitriona Balfe and Sam Heughan once again take up their roles as the steamiest coupling on cable. However, after the problematic depictions of Black slaves and people of color in season three, it is wise to approach this episode with caution.

I did exactly that as I sat down to reunite with the “bonnie” ginger hero and his “Sassanach” in America. What I discovered is a few missteps, but ultimately a season that promises a more dutiful cultural and race-conscious tone. In fact, this season of Outlander may just bring its Trump-supporting core audience some perspective that they desperately need.

The opening is the first cue of a tone change. Instead of slipping right to Claire and Jamie drama, the show gives an homage to the Native tribes that occupied the land long before Americans claimed it. This scene steps a little too close to the “magical Indian” trope as it attempts to expand the lore of the time traveling circle of stones to the states. It would be worth attacking this point if this were the only mention of those tribes, but it’s not. This scene is seeding a cultural storyline that is historically important as it contributes to the current conversations in this country on immigration and who truly belongs here. 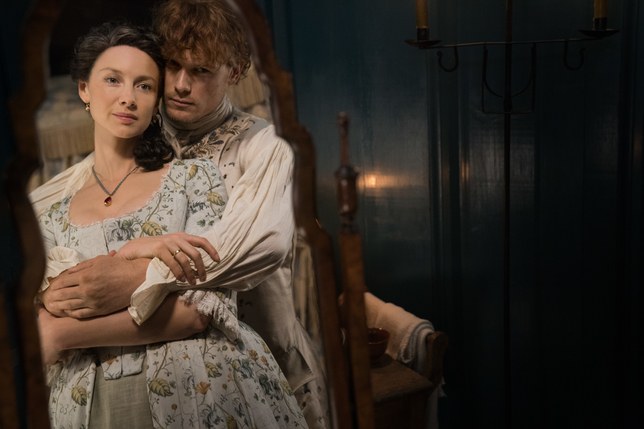 Then Claire starts going on about circles and noose pops onscreen.

Now, before you get as upset as I did upon seeing that particular rope, take in the entire scene. The date and place of the hanging flashes onscreen. The time period is eight years before the Revolutionary War. Although slavery was in full swing, so was the hanging of immigrants and poor people who broke the laws. Sure enough, one of the Fraser’s traveling companions is sentenced to the gallows for sleeping with a married woman. A Scotsman, not a Black man. Whew!

This is one of the missteps I am talking about. The whole circle connection, I get. Yes, it’s important, but a noose is very triggering right now, in 2018. White supremacists are using nooses to intimidate Black people and all over the country. People are still being lynched.

Consider the case of Danye Jones was hanged in a death that Ferguson, Missouri police are trying to call a suicide. But his mother is Melissa McKinnies, outspoken activist during the Michael Brown investigation and the protests in Ferguson.  The noose imagery on cable TV brings back the fact lynching is a centuries-old way to keep outspoken Black people “in their place”. Of course, the authorities looked the other way while telling Black people in the community that no crime was committed.

Your Man Jamie is One of THEM

But, I call it a misstep because they recover with the period-authentic public hanging of an immigrant for a crime. Jamie tries to spring Hayes, played by James Allenby-Kirk but is met by a bureaucracy that does not heed the Highlander codes of conduct and is unfamiliar with the  Fraser name (which was always a deus ex machina when Claire and Jamie got into trouble). In this season, Jamie is no one and gets that same treatment as his countryman in the Americas.

Jamie is one of them…an immigrant.

So, I have to ask, is the show going to stick with the strong “anti-immigration America” theme? It would be helpful in a time where white Americans, who hail from immigrants themselves, are hardening their hearts and laws against people coming to America seeking refuge. With said, the show needs to continue its use of the Frasers to draw out this anti-immigrant America angle. The show’s core audience is a population that has been oblivious to any other source of information on the topic. Maybe seeing their favorite ginger-haired hunk in the crosshairs of the same rhetoric these women have spewed from their own mouths will bring some perspective.

That also might be a lot of wishful thinking on my part though.

Is Outlander Dipping into #MeToo

The show does seem to be weaving a #MeToo theme into the storyline in a way the viewer is not used to seeing it. In a very moving scene, Jamie counsels his nephew Ian (played by John Bell) in what should be one of many talks on survivorship. Many of you still haven’t gotten over the visceral imagery of Jamie’s rape and torture that played out in the first and second seasons. In season four, Ian’s struggle to get over being sexually assaulted by “the witch you call Geillis” may turn that unforgivable imagery into a more important story of survivorship.

This once again is important for the target audience of women who polled against women in the Kavanaugh hearings nearly a month ago. GOP women went even further to become vocal against rape claims and presenting a false parallel claim of women lying about rape. Statistics done by several agencies over a number of years have proven otherwise. However, these women side with misogyny on several topics. This is another. Like the immigration theme, maybe seeing Jamie and Ian struggle with survivorship will work to bring the perspective these women are missing? Probably not, but it strikes a truer tone in a show in need of one.

Sexy in the Woods and Some Surprises

The first episode does NOT skimp on the steaminess between Claire and Jamie. It also offers that shot of a topless Jamie that so many were probably waiting months for. I was happy to see the Fergus (Cesar Domboy) and Marsali (Lauren Lyle) were still with the group as well. The episode is loaded with surprises though, some joyful and others very sad. There is a loss as the Frasers find out that American white men can’t always be trusted. Damn you, Steven Bonnet! 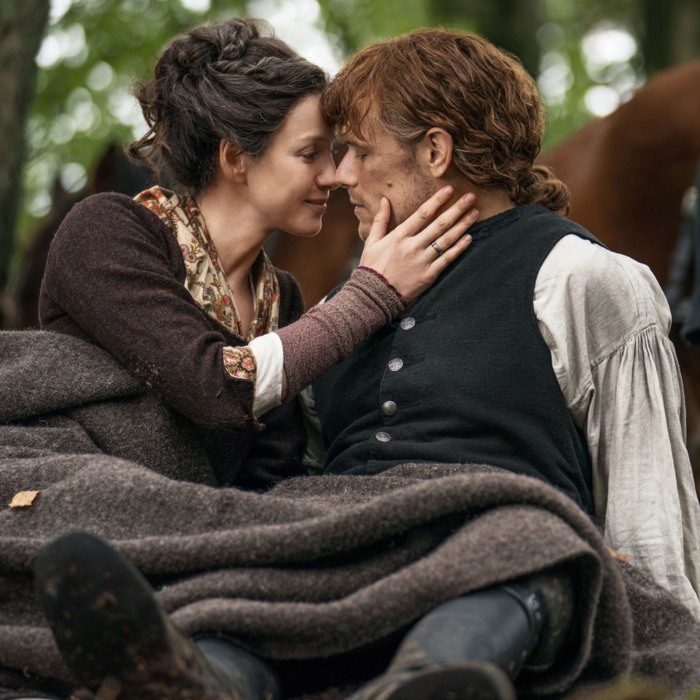 I want to point out Claire’s history lesson deep in the episode, which is enhanced by Jamie’s question “what about the natives?” It works to make a timely point about how this country is made. The following scene thus becomes an example of how out of touch many white Americans can be of their own history, in their own country. It’s a timeless lesson we all need right now.

And, don’t turn off the show when you see the old Black man Eutroclus, played by Leon Herbert. His story is one perspective of Black history that needed to be told, especially after the “pet” treatment of the enslaved last season.

Will the Tone Correction Stick?

Season four of Outlander is set to be a very memorable one that takes a responsible look at some of the topics we struggle with today. It could provide a historical context to some of the issues that Outlander’s core audience are oblivious to or that some deny even exists. Director Julian Holmes, I hope this is the direction you and writers Toni Graphia, Ronald D. Moore, and Matthew B. Roberts intend to continue.

One last note: pay close attention to the music at the beginning of the episode. This ingenious transition is courtesy Bear McCreary. Excellent transition from one culture to another without skipping a beat.

The ‘Outlander’ Reunion Tease and History Lesson No One Needed

Some Final Words on ‘Outlander’ Season 3

The Frasers Buy a Slave and Other White Nonsense on ‘Outlander’