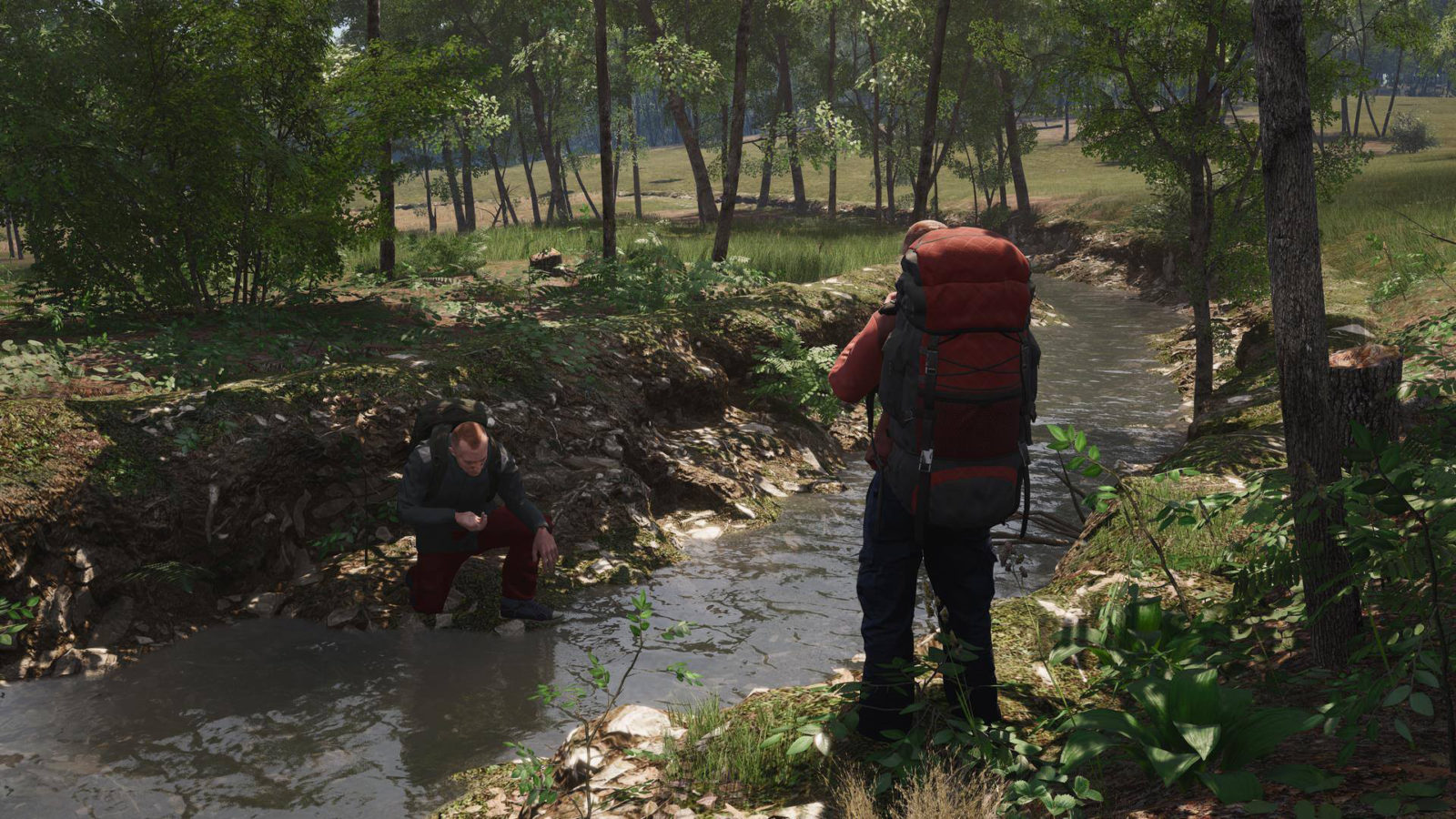 Devolver‘s newest, most mysterious outing has to be the Croatian-developed multiplayer shooter SCUM. And yet, “shooter” may be a misnomer; SCUM seeks to be a creatively unique twist on the persistently multiplayer battle-royale genre, a strange amalgamation of single-player RPG-sims and survival aspects with the trapped-on-an-island, king-of-the-hill shooters du jour like Player Unknown’s Battlegrounds and Fortnite.

Just ask Gamepire’s energetic community manager Josip Barisic, whose elaborate presentation of the game to PAX East’s excited participants seemed to unfurl in every logical direction. Until now, I’ve seen SCUM‘s various social media posts and videos, hinting at a game that appears conventional at a quick glance, though there is a complexity hiding beneath its surface which may yet yoke the imaginations of gamers beholden to PUBG‘s intrigues, as well as those who’ve avoided these types of experiences until now.

While little is known of the overarching story, SCUM presents the player with a televised island prison spanning 12km x 12km, inclusive of various weather biomes, dangerous wildlife, and plenty of crafting opportunities. My immediate assumption, especially attuned to the militaristic visual flavor of the game (an impression related to the run-down shacks, M16s, and navigation mechanics endemic to these experiences), was that we were looking at another 90+ player free-for-all, or something aligned with the happenstance, emergent cruelty of a game like DayZ. At the very least, I expected another battle royale-styled game, possibly with what looked like a crafting component.

However, these are clearly insufficient descriptors for SCUM. I was introduced to a bizarrely detailed series of systems, all of which match fluidly with the minute-to-minute gameplay. A trip to the stat menu—which, in a stroke of genius, frames the center of the field of view with a vertical bar of vision, never completely blocking out your perspective—showcases a myriad of character traits, skills, and even biorhythmic data, all of which matches pace with every move you make. Want to lose weight and increase your speed? Go for sprints up mountains, though be wary that the less you weigh, the less damage you can take. Want to balloon up into a blob-like, tanky bullet sponge? Make poor eating choices and the pounds will pile up, just like in real life. Tracked mechanics like specific vitamin intake from your food produces nuanced effects to other abilities, taking a character progression system similar to that of Skyrim and expanding it to a level of sheer lunacy.

“SCUM is, actually—you won’t believe this—but it’s a hardcore survival simulation game,” Barisic states in the pandemonium of PAX East and SCUM‘s elaborate, prison-recess-yard-like show booth. “If you’re more an FPS type of person, you can see the [multiplayer versus] demo we’re running today. But if you want to explore…If you just want to be on the island, sight-see and have fun? You can do that…look at the vegetation, go for a swim. The whole world is dynamic.”

He’s not kidding—for those of us looking for a vibrant, interactive world to explore, SCUM has been built from the ground up to reward this style of gameplay. While optional instanced scheduled events (including structured combat modes, evident in the team-based control point match which served as the PAX East demo) will be available, the player can also hike, swim, scale cliffs, and discover their own interests and distractions in the wider world of the game. I’d hesitate to expect exploration and non-violent emergent gameplay in this experience, but I was assured that SCUM caters to all-comers.

Many of my questions about these mechanics revolved around the assumptions I’ve developed around my experience with games like DayZ, or The Division‘s Dark Zone (a griefer’s paradise). Would there be rampant griefing, will people be sniping unaware saps from a distance? “Depends on the people! Like, at some point you might find someone who’s super-cool, you can meet up and travel, but another person might beat your head in with a shovel!”

To be honest, these are the aspects which bring me the most concern, because the design of SCUM‘s world looks absolutely breathtaking in motion. Thick and lush vegetation surrounded the PAX East demo areas which, while filled with traditional gunfire and death, made me imagine the opportunity to scour the massive island for things to do. I remember spending countless hours exploring the world of Shadow of the Colossus, looking for lizards or discovering unique vistas, gorges, and tiny private moments of beauty, and the possibility to do so with a team of friends or strangers sounds like a truly unheralded gaming experience. Gamepires must themselves be aware of this novelty, with the newest outbound SCUM images showcasing intimate moments at a campfire or seated on a beautiful cliff.

That being said, I have concerns about griefing opportunities. In Red Dead: Redemption‘s instanced multiplayer mode, this was fine, as the combat-focused mechanics encouraged wars between posses on the small servers with quick respawns. But in SCUM, much like DayZ, a death in the gameworld translates to lost loot, leveling, and hours of work. This adds to the thrill, sure, and kills and actions will somehow feed into a currency mechanic linked to the island’s TV show audience excitement, but for a game which wants to empower its players to find their own entertainment, I can’t help but expect griefing to be rewarded in an unbalanced manner.

So, I asked Barisic: can you make a peaceful, nonviolent server? “We will see.”

With 64 players per server, I truly hope so.

SCUM‘s Early Access version arrives on Steam in Q2 2018, and you can wishlist it now. 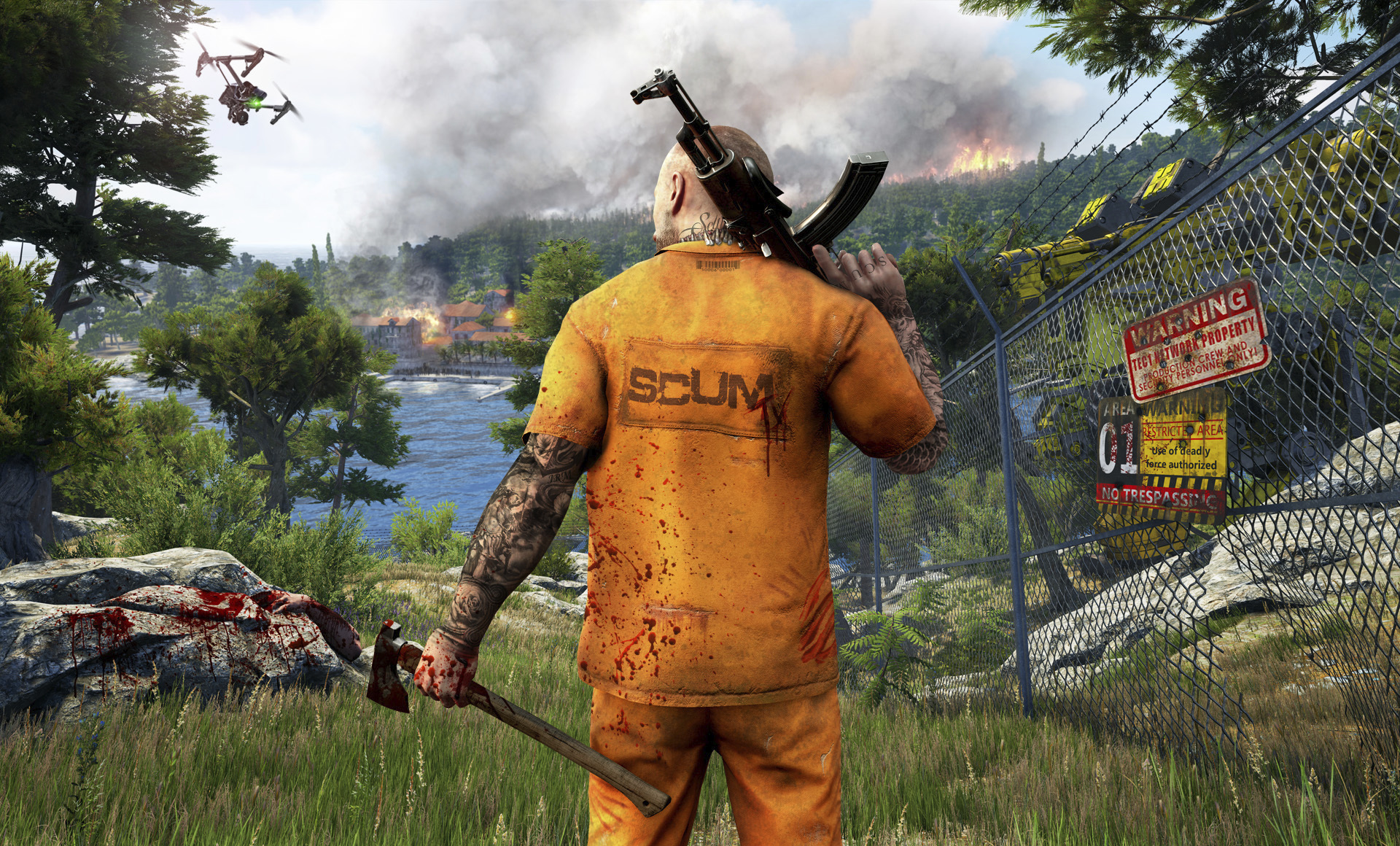