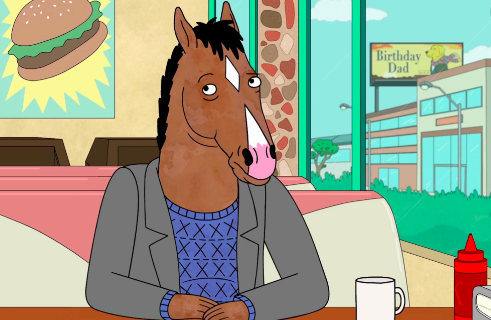 There has never been a show quite like BoJack Horseman.

For many years, BoJack Horseman has taught us what it means to be a complex person who struggles with depression, loneliness, and alcohol abuse, and we loved him for it. Many saw BoJack Horseman’s pain and tuned in every season to see what more he would discover about himself, his friends, and his own suffering.

BoJack, after 30 years of working hard in Hollywood, can finally start to live the high life, but the glamorous life comes with its own baggage. This anamorphic animated comedy/drama spanned from 2014–2020. In these several years, the show managed to touch on so many real-life examples of social, cultural, political, and philosophical events that infuse the human condition.

This beautiful work was created by the mind of Raphael Bob-Waksberg but was brought to life with the help of its wonderful cast. The titular character BoJack Horseman is voiced by Will Arnett. Along with Arnett, Amy Sedaris plays a pink lady (no, not from Grease), Princess Carolyn. Princess Carolyn is a pink cat who struggles with her reproductive challenges, comes from poverty, but always manages to land on her feet. Alison Brie voices Diane Nguyen, who is of Vietnamese descent. Diane is a writer who struggles with her mental health, while also struggling to find what truly makes her happy. The adorable Aaron Paul voices Todd Chavez, a goofball and loveable guy who is just living his best life. He goes on frequent hijinks that often lead to a better understanding of him. The overly positive Mr. Peanutbutter (a golden retriever) is voiced by Paul F. Tompkins.  Each character tries to find what makes them happy in regard to their professional and private life.

BoJack Horseman is a depressing character who seeks to understand what happiness is or, better yet, what makes him and other characters around him happy. Born and raised in an abusive household, with a father who was always distant and a mother who suffered in a loveless marriage, he tries to find happiness. BoJack, in his younger and more vulnerable years, went out in search of stardom in Hollywood. Through his journey to fame he lost parts of himself that defined his happiness. BoJack Horseman was the greatest star of the 1990s. His stardom allowed him to live a life that very few ever get to experience. Along with this lavish lifestyle came a lot of lonely nights, isolation, and depression. With no family to turn to and not fully understanding what it means to be a friend, what more could he do but to drink?

While BoJack is the main protagonist of the show, my personal favorite character is Diane Nguyen. Alison Brie plays the character with a daring intensity that many would not attempt. She discusses her disconnection with her heritage, as feeling like a costume being worn. With no other connection to the culture, this is often what I experience when going to my family’s country. Diane, a writer, struggles to find a way to express her own story to tell. When we are first introduced to her, she is signed on to be BoJack’s ghostwriter, and as the series progresses, she takes a job writing for celebrities’ socials, like Twitter.

Diane is a wall of contradictions. A dynamic character who changes not only her desires but also her appearance in the later seasons. Diane in her own way fights for what she believes. She continues to try to change the world through her writing knowing full well that people are more interested in gossip than in actual ways of bettering their society. She is a smart, talented character who tries to make people see the errors of their ways. This, in a lot of cases, proves to be her undoing. She wants women to support one another but rejects her coworkers’ writings at Girlcroosh (a woman-run website, not unlike Black Girl Nerds). She tries to be this person she believes she can be but later discovers that isn’t who she really is.

Diane is a lot like most writers — vulnerable, talented, and relatable. She is unhappy in her personal life, and in her professional life she manages to get her wins by taking down powerful men and causes. Ultimately, none of this really seems to matter. It all matters to her, yet it all doesn’t really seem to make a difference. Even when she does everything possible to bring awareness to a cause, she is still not taken seriously, and her unhappiness grows.

In the episode titled “Good Damage,” Diane speaks about a book she has been trying to write. This book would deal with her past and trauma. As she writes it, she discovers that she actually can’t write it. She goes on to say, “I thought that all the problems and abuse I had as a child made me special, and I would one day be able to write books for little girls to help them feel less alone … but I can’t write this book.” Princess Carolyn consoles her by telling her, “Then maybe write this other book. Maybe this book does that, too.” At this moment, Diane appears at ease, like her fighting can stop and she can finally start to be happy, again.

This elegantly crafted work is a must-see for anyone who wants to connect on a deeper level, socially, intellectually, and even creatively. For me, Diane represents how a lot of writers feel; hoping that something they write will help someone. As a writer who writes for a website, an American-born child of immigrant parents, who lived in Chicago and now who resides in Houston, I see a lot of parallels between Diane and myself. This show cultivates characters, a narrative, and storytelling that ignites a passion. While the ending felt premature, it has in its run managed to help many people cope with mental health.

To anyone who has yet to experience the magic of BoJack, I offer this: This show is about pain, more than anything else, and how we work through that pain. When things are difficult, there could be something in this show that might just help you.