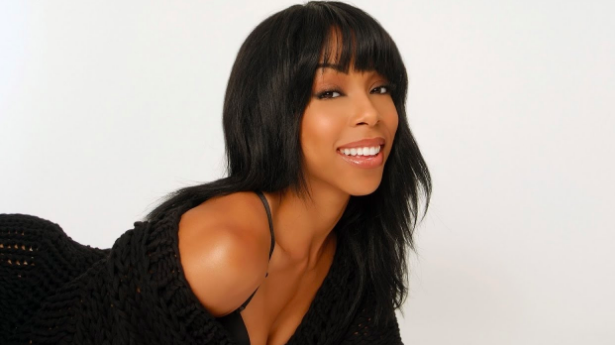 Brittany Perry-Russell and her son Isaiah Russell-Bailey had a singular goal: get him cast in the Netflix film, We Can Be Heroes. Instead, they ended up with a two for one when Brittany found herself cast alongside him as his on-screen mother.

Perry-Russell’s performance journey began at the age of three in her hometown of Fort Worth, Texas. Despite donning her first tutu as early as three years old, she felt a tug towards competitive cheerleading, a more popular activity in her area. But that initial tug of dance and acting returned when she was 16. Additionally, an encounter with legendary performer Debbie Allen forever reaffirmed her commitment to dance.

“I didn’t really get back into dance until I was 16,” says Perry-Russell. “I have to thank Debbie Allen for that because she came to Texas to do a play. I really wanted to be a part of it. The role I was auditioning for needed to dance, and I ended up getting it by the grace of God. I had a conversation with her about what I wanted to do, after college and she said, ‘Honey, you should be dancing as well.’ That one particular moment really did change the trajectory of my career. I thought, If Debbie Allen is telling me I can make it as a dancer, let me give it a try.”

Directed and written by Robert Rodriguez, We Can Be Heroes is a sequel to the hit film The Adventures of Shark Boy and Lava Girl. In this standalone sequel, the children of Earth’s superheroes are called to duty after alien invaders kidnap their parents.

With her undeniable talent on display, that initial try evolved into dance opportunities with Rihanna, Beyonce, Chris Brown, Ciara, and others.  Despite those wins, the acting bug remained and translated into roles on hit shows Glee, 13 Reasons Why, and more. With a wealth of experience under her belt, auditioning for another role would seem like a no-brainer. However, she did have some reservations about participating in a project with Isaiah.

After a rapidly paced audition and securing the roles, she discovered a real opportunity to co-star alongside him as his on-screen mother. Reflecting on the audition, she was on the verge of foregoing the opportunity for fear of not landing the role and the subsequent embarrassment of being on set daily with the crew who passed on her audition. Incidentally, she goes on to explain how both characters were slated to be white.

“When we got the script, I said, ‘Oh, my God, you have a mother,’” Perry-Russell reveals. “Maybe I should audition. I thought about it for a second. I told my manager about it, and he reached out to casting and told them I would like to read for it. We were in Texas for three days, and the casting director agreed to see me. I remember telling Isaiah not to mention my audition to anybody because if I don’t get this, I’m going to be so embarrassed that I have to sit and watch someone play your mom for the next three months. But I got it. It’s still exciting because when I looked at the sketches for our costumes and what they thought our characters were going to be, the vision was a white woman with red hair and twin boys.”

Instead of a red-haired white woman, she arrived at the audition donning long box braids ready to demonstrate another version of a superhero. In fact, her choice to wear braids, like the audition, was a last-minute one. Already wearing them, she debated whether her hair choice would be wise given the nature of the role. In the rare instances where a Black woman appears on screen as a superhero, the industry-standard is long straight hair that would blow in the wind. After consulting with her son, she decided to leave the braids in. After securing the role, the braids became part of her superhero’s permanent look, much to fans’ delight.

“The number of DMs I get and continue to get from people who are excited to not only see African-American superheroes that we don’t really know that well, because of weren’t celebrities or anything like that, but also they’re like it’s outstanding to see your in braids on a poster. So it’s been cool.”

With the film now complete, Perry-Russell now muses at how professional her young son was on set with all of his co-stars, including herself. With a laugh, she says she found herself turning to him whenever she completed a scene. It was then she realized he was going to be in for the long haul.

“He was on set with me when I did my first stunt scene. And I would walk over to my son like, ‘What do you think? How do you think I did?’ I look strong. Now he’s like, ‘Yeah, but I think you should do this next time.’ That is how we started to bond differently. But as far as bringing different nuances to my character, I wouldn’t say I really had to for this specific role. I really wanted to bring a lot of myself to it since it. I’m the mother of a teenage son. But you know, outside of that, working as co-stars were interesting, to say the least. I appreciate his professionalism.”